The Chesterfields rocked Arts in the Park 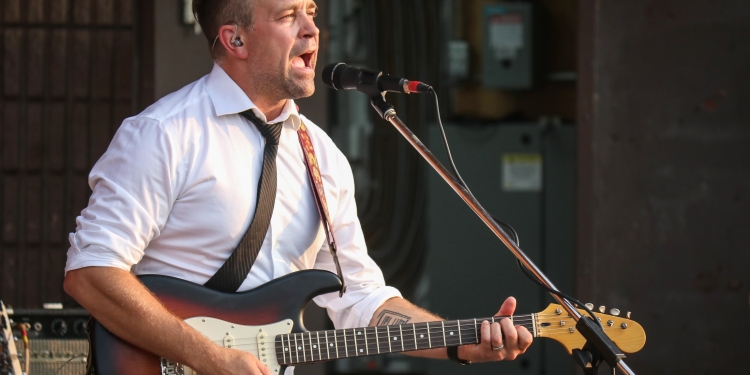 Cornwall, Ontario – Personally, 22 years is the most prolonged interval I’ve seen a band play twice. The first time I saw The Chesterfields was at a St. Joseph’s Secondary School dance in 1999. Around that time, The Chesterfields had released a professionally produced CD – a full year before many independent bands started burning CDRs (recordable CDs) at home.

The second time I saw The Chesterfields was on Thursday, August 5, 2021, at Arts in the Park hosted at The Bandshell in Lamoureux Park in downtown Cornwall. Like that first concert I saw 22 years prior, The Chesterfields were dressed in formal attire, including white dress shirts and black ties. The concert was hot, sweaty, and legendary

The Chesterfields lineup at Arts in the Park consisted of Nick Seguin (vocals and guitar), Ben Mullin (vocals and guitar), Josh Hofmann (keyboards and backup vocals), Matt Levesque (bass and backup vocals), and Simon Mclinden (drums). This lineup is an all-star mix of musicians from various local bands over the past few decades, including Coldrift, Elly May, and The Wilderness Club.

There were over 200 people at The Chesterfields concert – young and old were dancing. The music played at the park consisted of covers from The Beatles, Joel Plaskett, and many more. Also, there was a scenic view with boats going by the water and cyclist riding the recreational path.

I can think of many Arts in the Park concerts that drew less than 50 people. That makes the turn-out of over 200 people on Wednesday evening even more impressive. It was a perfect storm of a talented band and a reprise to normalcy after a long pandemic. Of course, audience members of different households maintained social distancing, making it safe to unmask outside.

For more information on The Chesterfields visit their Facebook page.

There are seven more Arts in the Park concerts over the next several weeks.

About Arts in the Park: “Arts in the Park is a series of free, family-friendly musical acts and an outdoor movie presentation. The concert series is held outdoors at the Lion’s Club Bandshell, where everyone is always welcome. Please bring your chair, blanket and/or picnic basket to Lamoureux Park and enjoy music performed by popular local artists and performers.

Free parking is available behind the Lion’s Club Bandshell and at the Cornwall Civic Complex. All shows are weather permitting and begin at 7:00 p.m. unless otherwise stated. The schedule is subject to change without notice.  Please visit often as further concerts and/or updates will be added.”

For more information on Arts in the Park, visit the City of Cornwall website.

Are There Electric Bikes Good For Hunting?