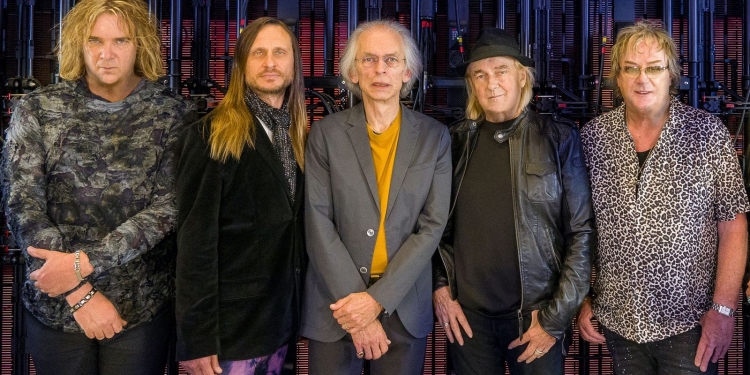 Newcastle, Washington – Grammy Award-winning and Rock and Roll Hall of Fame band YES have been at the forefront of progressive music for over half a century.

On October 1st, 2021, YES is releasing their twenty-second studio album titled “The Quest” via Inside Out Music.

Founding member Chris Squire, who fought a losing battle with leukemia, gave Billy Sherwood his blessing to replace him in 2015.

“Chris Squire has always been a mentor to Billy Sherwood. I’ve known Billy for around 25 years, and so did Chris, so we had a working relationship,” drummer Alan White elaborated. “Not only could Billy play like Chris, but Billy could also sing most of Chris’s harmonies, so he was an obvious replacement when Chris passed away,” White added.

“The Quest” is the first album release by YES in seven years. Their last album, Heaven & Earth, was released in 2014.

“It was about time we released new songs. Of course, a lot of our time was spent getting over the fact Chris Squire passed on. We did a lot of touring since that time, and I think it was time for new music. Everyone in the band writes all the time, and a new album was a way to release some of that material,” White disclosed.

“I think Steve did a great job. He spent a lot of time with pre-production and in the studio, spending many hours listening to the many takes repeatedly. Steve did a wonderful job,” White responded.

There are many terrific songs on the new album, including the single for “Ice Bridge,” which came out a month ago. Listen to “Ice Bridge” on YouTube.

“I think “Ice Bridge” will be really good to play live on stage. Also, “Minus the Man” is another great song. There are a variety of different songs, quite different rhythms, they are all going to be very pleasurable to play,” White went on.

Jon Davison and Geoff Downes collaborated on the song “The Ice Bridge,” which examines the dangers of climate change.

“I think it’s a good time to find out what is going on in the world. The songs very much talk about that, where the world is going now,” White said.

Despite the challenges of a pandemic and lockdowns, the band could use file sharing and focus on creating a new album.

“A lot of the backing tracks, and a lot of the takes, the digital info was done in England, and from there it’s sent over to the other members. I recorded the drums in Los Angeles. We worked on it for about two weeks, and we got the whole album done, and it was enjoyable to play. This album is the first YES has done virtually. It seemed to work out well,” White replied.

“We’re going to be touring; that’s what we’re supposed to do. Again, with COVID, we’ll see what happens. Hopefully, we can pull it off,” White stated.

Fans can pre-order the new album “The Quest” here.

“I played piano from the age of 6. My uncle was a drummer, and my grandfather was a pianist. My uncle said Alan is playing the piano very percussively; maybe we should try putting him on a set of drums. When you play two instruments instead of one, it’s always better because they reflect on each other. Within three months of getting a drum kit (at the age of 12), I was playing on stage with a band. It was a natural progression for me,” White recalled.

In 1969, John Lennon invited Alan White to play drums with him and Yoko Ono at the Toronto Rock and Roll Revival festival in September of 1969.

Over the next four years, Alan White drummed on several albums with John Lennon, including on the song “Imagine.”

Last week the legendary John Lennon song “Imagine” celebrated its 50th anniversary. It’s considered one of the top songs of the twentieth century.

“To play on the song “Imagine” was monumental. It was called the song of the millennium. I’m very proud to carry that banner of playing on it. I think it was one of the best songs ever written. To play on it, to be a part of it, makes me very proud,” White added.

The band YES went on to sell approximately 14 million albums. YES received five Grammy nominations, and won a Grammy Award for Best Rock Instrumental Performance for their instrumental song “Cinema,” which was featured on their album “90125”.

“It’s always good to receive a Grammy. “It was quite a long time ago, in 1985, when we received a Grammy for “Cinema.” I didn’t realize at that time that YES is known for being a harmony group and musical group. So, the instrumental song had a lot of harmonies, and we received a Grammy for the Best Rock Instrumental Performance, which was quite unexpected,” White replied.

The first YES single from the album “90125” was titled “Owner of a Lonely Heart,” which reached No. 1 on the Billboard Hot 100 chart. The song became such a pop culture sensation that Weird Al Yankovic made a polka cover it.

“Well, I heard it, and it’s kind of funny, and he’s a funny guy (Weird Al). I’m a big fan of polka, and I enjoyed it. It reminds me of something I see on a news program here in America called ABC World News. Every Thursday night they do the “World News Polka” and it’s quite funny too,” said White with a smile.

YES would play their hit song “Owner of a Lonely Heart” when they were inducted to the Rock and Roll Hall of Fame in 2017.

“We got on stage, played “Owner of a Lonely Heart,” and it was a good evening. Also, I had met some of the other players who had been previously in Yes,” White recounted.

Many advocated for YES being inducted to the Rock and Roll Hall of Fame, including former Genesis guitarist Steve Hackett. Genesis and YES, are both pioneers of progressive music. Breaking news came out last week that Phil Collins, who drummed for Genesis, may never drum again.

“Phil Collins is talented, he has a great voice, and he’s an all-around great musician. I don’t think Phil will go away completely by retiring. He has a huge catalog behind him from playing with Genesis, Brand X, and all those bands. He has a great legacy,” Alan White concluded.

Likewise, Alan White, and YES have created a great legacy for themselves, and the journey continues with the new album “The Quest” and more touring.