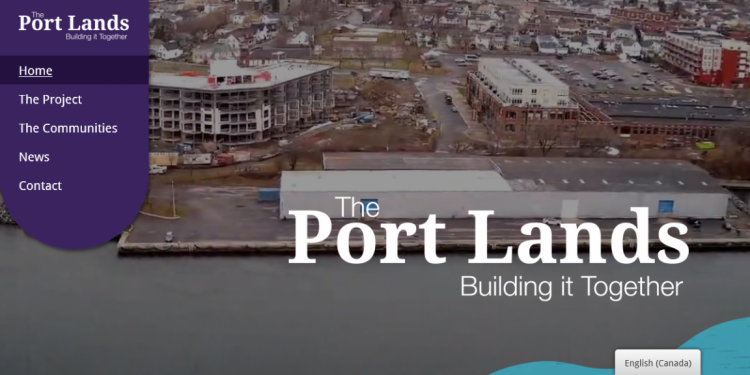 [CORNWALL, ON, April 29, 2022] – The historic Co-Ownership agreement between the City of Cornwall and the Mohawk Council of Akwesasne has created the opportunity and need to promote and present the Mohawk culture by transitioning the Port Lands website into a fully trilingual website that includes
Mohawk, French, and English languages.

There is a unique opportunity to encourage cultural visibility by translating web content into Mohawk and French. The Co-Owners consist of representatives from The City of Cornwall and the Mohawk Council of Akwesasne. “The partnership with the City of Cornwall is no doubt an important one” says
Grand Chief Abram Benedict. “Seeing their commitment to not only continuing our partnership but furthering it by providing this translation has been very exciting. For me, I look forward to continuing down this road of collaboration and respect”.

The Port Lands, with support from ACCFutures, has worked with Akwesasne-based translation specialist, Dorothy Lazore, to translate the entirety of the Port Lands website into Mohawk. This is one of the only websites in the region to be fully translated into an Indigenous language and The Port Lands Co-Owners
were more than willing to make it into a reality. “Working in the Mohawk language is much more difficult than people realize,” says Dorothy Lazore. “Mohawk is a very descriptive language, so reworking newer vocabulary into Mohawk is a challenge. Much research is needed to be able to accurately translate modern words in Mohawk considering that the word order and the actual use of the language is much different than English or French”.

The Port Lands Co-Owners are also committed to promoting cultural visibility for the Francophone communities in the region and were happy to provide funding for the French translation of the website through their Official Languages Minority Community Grant.

Users can visit the Port Lands website and access the Mohawk and French language versions right now by clicking this link www.theportlands.org

About The Port Lands
Following the creation of the Seaway in 1956, local leadership announced the creation of a port in Cornwall to accommodate shipping and receiving for local factories. The harbour was officially opened at the foot of Edward Street in 1967. Annual traffic came primarily from the unloading of raw materials like coal and cotton, raw materials used by local factories like and other companies located in the area of the Cotton Mills.

On April 15th, 2016 the Mohawk Council of Akwesasne and the Corporation of the City of Cornwall signed a historic agreement which resulted in the two bodies acquiring co-ownership of the Port Lands, land which had previously been owned and managed by Transport Canada. As part of this agreement the co-owners agreed to work together in a spirit of good faith, mutual respect, understanding and harmony in the planning, development and maintenance of the Port Lands.