OUT and ABOUT with Seeker Chick Mai-Liis : enjoying a 4 day celebration of The Queen’s Platinum Jubilee.

by Mai-Liis Renaud
in Columns, News, Out and About
Reading Time: 6 mins read 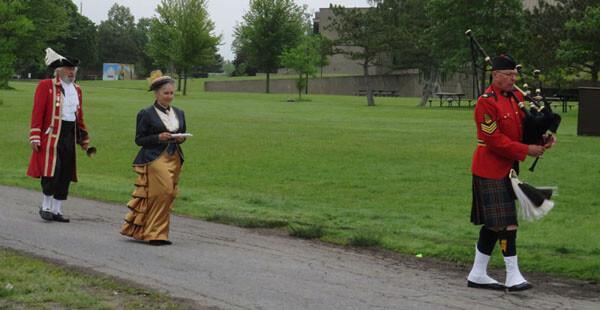 Many of us celebrate certain milestones in our lives especially years spent at jobs but how many of us can say that we have been at the same job for 70 years? Well Queen Elizabeth II certainly can and here in Cornwall we celebrated the Queen’s Platinum Jubilee this past Thursday with a beautiful celebration hosted by the SD&G Historical Society at the Bandshell in Lamoureux Park, while over in England, where I am from, celebrations began as well on Thursday and continued through to today – with 4 days of celebrations altogether!

My mother was telling me about Queen Elizabeth’s Coronation on June 2nd, 1953 and how they watched this event on a small black and white television. She also remembers when Queen Elizabeth’s father, King George VI died and his daughter was away on a trip. On her return the newspaper headlines read “Elizabeth leaves as a Princess and returns as a Queen”. She became the Queen at age 25 and is now 96 years old. All I can say is WOW!

Apparently that is exactly what The Queen said – 3 times to be exact – (as I learnt from Andre Pommier) when 5 years ago, Jim Brownell presented her with a brooch designed by Andre Pommier of Pommier Jewellers. The brooch was designed featuring the regimental badge of the SD&G Highlanders and had to be shipped to England two weeks ahead of Jim’s visit as it had to get through the many stages of Security before it reached The Queen. The Queen is the Commander-in-Chief of the Stormont, Dundas and Glengarry Highlanders.

The Cornwall Centennial Choir sang “God Save The Queen”. England’s National Anthem and MC Thom Racine welcomed everyone and the special guests of the day. It was definitely a chilly day but over a hundred people were in attendance.

Ashley MacLeod and her family entertained with Scottish tunes, some sung in Gaelic, violin playing and some Highland dancing.

The celebrations concluded with O Canada sung by the Centennial Choir and Piper Gilbert Young piping us out.

During her reign, the Queen has made 22 official tours of Canada, more than any other Commonwealth country. Her travels have brought her to the east, west and north, to large cities, small towns and tiny hamlets. She has witnessed firsthand several key moments in Canadian history including the opening of the St. Lawrence Seaway in 1959 here in Cornwall. The Queen has visited Cornwall and SDG several times: Her first visit was as Princess in 1951 representing her father, King George VI and consisted of a train stop along her route to Toronto. In 1959, she visited Cornwall as part of a royal tour, where she opened the St. Lawrence Seaway, and stayed at the Cornwallis Hotel. In 1967, she visited the city as part of her Canadian Centennial tour. While here, she signed the city’s Golden Book with Prince Philip, and in 1976 she visited Upper Canada Village. One of the most publicized visits was during the royal tour of 1984, which was also Cornwall’s bicentennial year. Her Majesty has said in multiple speeches that she always regarded Canada as home and shares in the pride we take in our achievements.

On Thursday evening a beacon was lit by SD&G Historical Society President and Town Crier Wes Libbey and Carole with 3,000 beacons being lit across the UK and the Commonwealth for the Queen’s Platinum Jubilee Celebrations.

On these special days I do miss being back in England to share in the festivities throughout the extended Bank Holiday Weekend from Thursday June 2nd to Sunday June 5th but thankfully we have so many ways to connect with the UK that I have been able to share in these special activities all the way from Canada.

Did you all see the beautiful coach that Queen Elizabeth rode in during her Coronation? The same coach led the Platinum Pageant which closed the Jubilee celebrations in London today. The Queen has not made many appearances during the past 4 days as she is after all 96 years old and is finding that she gets tired quite fast but she did with make a surprise appearance on the Buckingham Palace balcony today and thrilled the tens of thousands of people who had gathered on The Mall hoping to see Her Royal Highness.

How can Canadians fix fitness problems caused by a pandemic? Don't Miss Monday Morning Motivation, today at 10am.