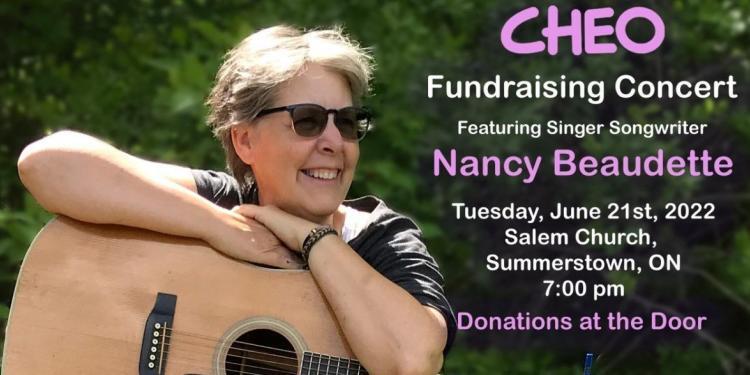 Nancy Beaudette, will be performing this coming Tuesday, June 21st at 7pm at Salem Church in Summerstown at a Fundraising Concert for CHEO. The event is sponsored by Williamstown Historical Society and Glengarry Living Archives with donations will be accepted at the door.

With musical roots originating in Eastern Ontario, Canada, award-winning singer-songwriter Nancy Beaudette has been performing internationally for over thirty years. On the border of Glengarry County, she was raised on French fiddle-music and Irish and Scottish reels, and as a youngster, she cut her teeth chording to her grandfather’s old-time fiddling in the family home.

Nancy has eight full length CDs, and has acquired numerous accolades throughout the years.

In 1997 Nancy won a CGMA for song of the year (Canadian Gospel Music Award – highest honor for gospel music in Canada), and has been a Winner or Finalist in some of the industries most distinguished competitions, including being a two-time finalist in Kerrville New Folk, Mountain Stage New Song Competition, Mid-Atlantic Song Contest, Great American Song Contest, the Independent Music Awards, and Global Peace Song. On-stage and off, this beloved songwriter practices hometown hospitality.