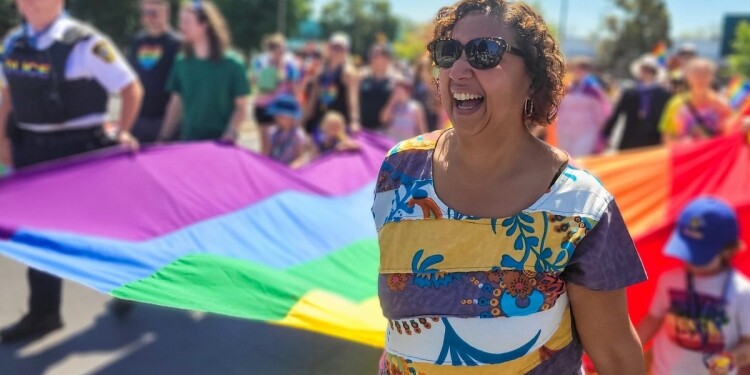 Article and Photo(s) by Jason Setnyk

Cornwall, Ontario – On Saturday, July 9, 2022, a large crowd gathered in front of the Aquatic Centre to walk in a parade celebrating diversity and pride. The participants marched up Sydney Street, Fifth Street, and back down Pitt Street to Lamoureux Park where hundreds more were gathered. The parade celebrating solidarity was impressive, from rainbow flags to signs to chants of equality.

“When I think about the support we received this year, I’m not surprised to hear over 800 people were marching in the parade and seeing over a thousand people here already, and we only just started. The support we received this year is unlike anything I’ve ever seen. I’ve been with Diversity Cornwall since 2018, and we’ve never seen anything like this, and it’s incredible,” said volunteer coordinator Rebecca Sorrell-Forrester.

At Lamoureux Park, there were speeches and entertainment at the bandshell, a vendor’s market, kids’ zone, BBQ, and beer garden.

Many politicians came out to the event, union members, and members of non-profit groups.

“I’m thrilled to be here. It’s a beautiful day. We’re here to celebrate but also to say there is still much work to be done. We’re going to do it together in solidarity, and it’s going to be okay,” said Senator Bernadette Clement.

“It’s a darn good turnout, I’m not sure if it’s a record, but it’s probably the best I’ve seen. It’s about inclusivity; all people are welcome in our community. It doesn’t matter what race, colour, or creed. This community is friendly and welcoming, and we’re starting to be more open, in my estimation. We’re more welcoming, especially with diversity and immigration. This community is very welcoming,” Cornwall Mayor Glen Grant stated.

“It’s fantastic, the turnout, the weather is great, everyone appears to be in a great mood, it’s amazing,” City Councillor Justin Towndale added.

Also in attendance was City Councillor Elaine MacDonald, who helped co-organize a protest in front of City Hall in 2003 when there was hesitancy about raising the pride flag. This happened just before same-sex marriage was finally legalized in Canada.

“It’s fantastic to see such a huge turnout, and it’s heartening to see more people marching than watching; that means there is a lot of support in Cornwall,” Wendy Stephen explained.

Many parents attended this Diversity event to support their children.

“As a mother, I can’t thank you enough today for helping pave that way to make a better world than what most of us grew up with,” said United Way Executive Director Juliette Labossière in a speech.