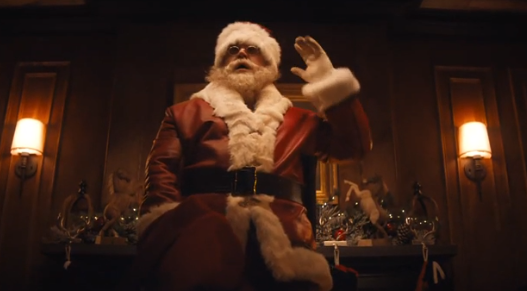 I had high expectations.

The story isn’t new; rich family taken hostage for money, but with Santa saving the day, it promised to be a new take on an old topic. Did it deliver?

At first, I didn’t think it would. Writers Pat Casey and Josh Miller and director Tommy Wirkola started the show at, what felt to me, a very slow pace. But then, as Santa–played by none other than David Harbour (Stranger Things’ Hopper)– started to slay the naughty on his list in a fashion akin to Art the Clown in “Terrifier 2“, it certainly got my attention.

The story was developed enough, but the writing was weak at times. Nonetheless, despite a slow beginning, the flick did deliver big on both Christmas Cheers for the nice list, and punishments for the naughty list. What I found most interesting is how we get to see a bit of Santa’s Origin Story. Without revealing too much, know that it’s a story that is like none other. But it was sadly too brief, and it left me wanting to know more. Maybe it was deliberate? Perhaps we will see a “Violent Night 2“? I hope so. There is so much more left to discover about the making of Kris Kringle depicted in the flashbacks Old Saint Nick periodically has. It would make for a totally awesome movie on its own.

Furthermore, as Santa is also being portrayed as much more “human” than ever before– he drinks, he bleeds, he feels emotions that are not necessarily “jolly”– and ends up coming across as a truly endearing being, flaws and all.

Of course, John Leguizamo is perfectly casted in the role of “Scrooge“, the mastermind behind the home invasion, a man who had Christmas ruined as a child and clearly wants revenge. But the star of the show is most definitely “Trudy”, played by Leah Brady, who never for one minute stops believing in Santa.

Somewhat reminiscent of “Home Alone” the last 45 minutes of the movie are fast-paced and full of action. However, it’s definitely not for everybody. It is extremely gruesome, explaining the Rated R classification. Blood, guts, and extremely painful-to-watch booby traps consequences will certainly delight horror movie fans.

But those who are looking for a feel-good movie will be left crying.

How To Improve Your Sleeping, 6 Interesting Ideas