Try these Ribs by Sharyn Thompson 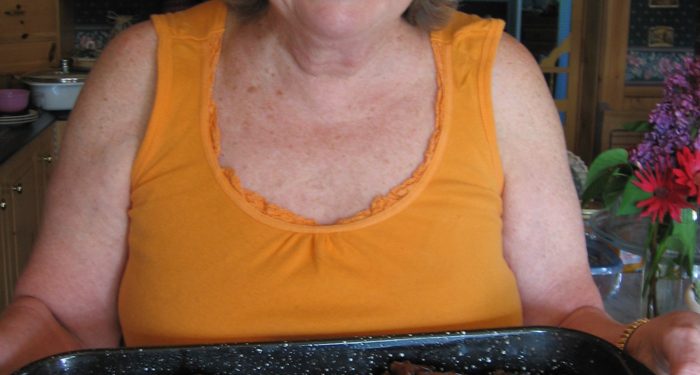 I have been craving a good feed of spareribs lately. I made my daughter Jen’s recipe for beer-braised sticky ribs this past Sunday. Instead of finishing them on the barbeque, I did them in my oven. Both ways are great. I made triple the recipe so we had plenty. While my oven was on, I baked some fresh asparagus spears and re-heated a casserole dish of oven rice. Yummy!

It’s time to fill your hummingbird feeders. Our little hummers were back this past Friday May 17th. They are late arriving this year. Last year they were back on May 5th. I expect the bad weather down in the States was a factor. Here is the recipe to feed them. Never add red food colouring as the dye can damage their kidneys. Choose a hummingbird feeder that has some red colour on it. Check out my picture of one of our hummingbirds. I just love to sit and watch them!

Bring to a boil 2 cups of water and 1/2 cup of white sugar. Just heat until the sugar is dissolved. Take off the heat, cool and fill the feeder with the syrup. You should replace the syrup every few days when the weather is hot. The syrup can mould. Be sure to wash and rinse the feeder each time you fill it.

BACK TO THE RIBS: for a single recipe: this will serve 4

about 1 kg. pork back ribs (these have more meat on them compared to spareribs)

-Slice the ribs into 2 or three rib portions. This will make eating them later much easier.

-In a large Dutch oven, mix together the beer, barbeque sauce, maple syrup and soya sauce.

-Place the ribs in the pot. Stir to cover each piece of pork rib. It is OK if they aren’t completely immersed in the mixture.

-Cover the pot and bring the sauce to a boil over HIGH heat. Then turn down the heat to MEDIUM LOW  and gently simmer for about 2 hours, stirring occasionally, until the meat is fork tender.

-Using a slotted spoon, carefully lift the ribs from the sauce. Place them in a shallow baking pan.

-Over HIGH heat, bring the sauce to a boil, stirring often. Reduce the liquid until it thickens. This will take about 20 minutes.

-If you are making this ahead of mealtime, at this point, refrigerate both the reduced sauce and the ribs.

-If you are refrigerating the sauce, once cold, skim off any fat that floats to the surface.

-To glaze the ribs in your oven, just brush the sauce over the tops of the ribs and bake in a 325 degree F. oven for about 15 to 30 minutes, brushing the tops with the sauce every few minutes.

-To finish the ribs on your BBQ, oil the grill. Heat the sauce in your microwave. Have the grill set to MEDIUM and brush the warmed sauce over the ribs. Have the BBQ uncovered. Continue to brush the sauce on the ribs, turning them occasionally. Cook for 8 to 10 minutes on the BBQ.  Serve the warm sauce along with the ribs for dipping. ENJOY!