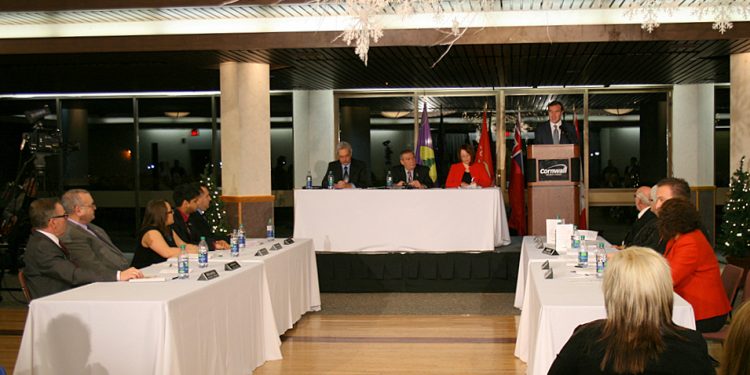 Cornwall Ontario – Over a hundred people were in attendance when the newly elected Cornwall City Council had their inaugural meeting on Monday December 1st at the Cornwall Civic Complex to take the Oath of Office.

Young offered three nuggets of wisdom to the new Council. “1- Declare yourself a success. 2- It’s not about you, this is about service. 3- The key responsibility in a leadership team is to pave the path forward”.

In his Mayoral Inaugural address Leslie O’Shaugnesssy thanked all who ran and asked for them to remain involved. Then he congratulated all the City Councilors for their respective victories.

Promises were also made by O’Shaugnesssy that this council will be transparent. “I assure you that my door will always be opened and that decisions will be made by council as a whole,” said O’Shaugnesssy.

Members of the new council also made comments:

Mark MacDonald: “I am also anxious to get started… I believe, I truly believe that it’s Cornwall’s Big Bang moment… The expectations are now high… we need a council that have some common goals… It’s not gonna be easy cause we’ve been handed a big mess…”

Andre Rivette: “I would just like to thank my family. My daughter is here on facetime. I’d like to thank the residents of Cornwall for giving me a fifth term on city council… I feel very privileged that citizens allowed me to represent them one more time.”

Caryline Hebert: “I certainly couldn’t be here with out my family… A very special thank you to my mother, Aline, who was the best campaign manager one could get. I set to run because I want to bring positive change to this city.”

Justin Towndale: “I want to say to the people of Cornwall thank you. I’m very humbled by your confidence. Thank you to all the people to worked on my campaign. Special thanks to my parents and to my donors”.

David Murphy: He thanked his campaign manager and his good friend Dan Allaire. Thanks his family as well. “This city will not be the same 48 months from now”.

Claude McIntosh: He thanked all his loved one and the people who voted for him. Claude McIntosh is new to council and came in second out of 29 candidates.

Elaine MacDonald: “Thank you everybody for the honour to be able to serve. Tonight we were made councilors, but being councilor is not about being something but about doing something.”

Brock Frost: “Thank you guys, to everyone who supported me and voted for me. You have given me the want and the desire to work hard for you”.

Maurice Dupelle: He took this time to thank all the people who helped him getting here again this time around. “Cornwall is on the move”.

Bernadette Clement: ” I am deeply honored to have received such trust from the citizens. Let us shine as a city.”