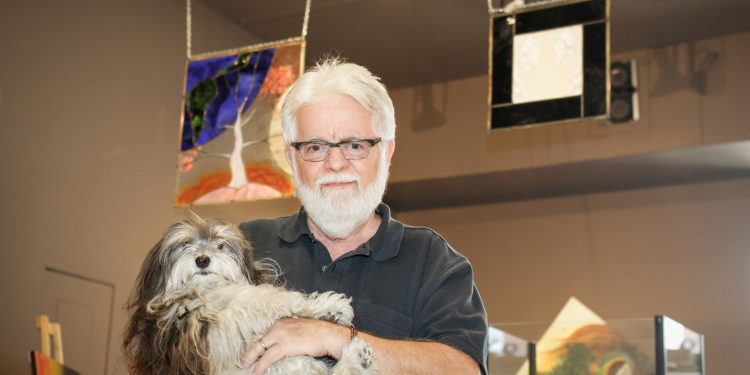 Cornwall Ontario — Terry Mosher, known by his pen name Aislin, has been a political cartoonist for the Montreal Gazette since 1972 and he is still published in that newspaper today.

He visited The Art Gallery in Cornwall in preparation for an exhibit that will take place from September 13, 2015 to October 8, 2015. His prints and books will be for sale. Aislin will be visiting the gallery on Saturday September 19, 2015 to meet and greet the public. The art show will also feature other local cartoonist from the area including Frank Bruelle.

Aislin graduated from the École des Beaux-arts in 1967, and paid for art school by drawing caricatures and portraits on Rue du Trésor in Quebec City for tourist. Soon after he landed his first newspaper job as a political cartoonist for the Montreal Star before eventually joining the Gazette.

Aislin has an impressive portfolio of published work as a freelance cartoonist. His drawings and cartoons have appeared in Time Magazine, The New York Times, Canada’s Reader’s Digest, The Atlantic Monthly, Harper’s, and Punch just to name a few.

Here is an interesting piece of trivia: Aislin created the original artwork for the board game Trivial Pursuit.

He was the recipient of two National Newspaper Awards and he was also the youngest person to be inducted into Canada’s News Hall of Fame.

Aislin’s pencil has also created some controversy. He was the first artist in Canadian history to have his work denounced by a Member of Parliament. In 1993 MP Robert Layton stated that his work was “a crime against fundamental Canadian values of decency and mutual respect” in the House of Commons. Great art is often controversial.

1 – You are described as Canada’s nastiest political cartoonist, why is that?

Those aren’t my words. I don’t know if it is nasty so much as I like to take chances. When I was younger I was a real rascal in terms of snubbing my nose at the system. I don’t know if I do it as much anymore but occasionally I do. It’s very important I think that cartoons be a part of the public discussion, otherwise you are boring people, and that is not a good thing to do. So occasionally if you are a little bit controversial, or you’re thumbing your nose at things, that is probably a good thing.

2 – Over the past forty years who have been your favourite politicians to cover?

It always depends on eras. In the beginning I was very fortunate starting out. I had Pierre Trudeau, Jean Drapeau who was Mayor of Montreal, René Lévesque who was Premier of Quebec, so they were tremendously interesting times especially with the development of the real Quebec debate. At that time I suppose my favourite politician to draw would have been René Lévesque with Jean Drapeau coming a close second. But then in the 80s came Brian Mulroney and he rapidly became a favourite target if you will. Especially with the controversy over a number of things such as free trade and so on. I knew Brian quite well so I felt like I almost owned him in terms of cartooning him and being an English Montrealer. Then in the 90s it was more Jacques Parizeau, Lucien Bouchard, and my personal favourite Louise Beaudoin who was the Language Minister in Quebec. I began drawing her in leather outfits with whips and chains like a dominatrix. That was a hugely popular series for about five, six, seven years. More recently, of course, it has been Stephen Harper and a whole series of Liberal leaders. It’s interesting how each era takes on different personalities and almost a different approach.

3 – What makes political cartoons so funny and entertaining? Why do people enjoy them so much?

I think a big part of it is how cartooning came about. It was the turn of the last century when political cartooning really began to thrive. They had these big boring editorial pages with nothing on them except rows and rows of print and no one was reading them. Someone decided in the 1890s, lets illustrate these editorials, perhaps draw the eye to the page a little bit more. Well it backfired on them because rapidly the cartoons became far more popular than the editorials and still are today. I think it is a focal point, a resting stop for the reader of a newspaper. Now more so on the web where you expect a momentary hit of entertainment or amusement or anger or whatever it happens to be and people start to look forward to that particular spot. It can happen to anybody, Rob Rogers in Pittsburgh, or any number of other people. They have their audience as I do in Montreal, and people start to look forward to that particular point of view. That’s why I’m saying you have to surprise them, and you have to refresh yourself all the time, and you can’t bore people with that spot, that soapbox we have in the middle of the newspaper.

4 – Has Social Media changed how cartooning is being done?

Sure, dramatically. The internet itself has changed. I now draw cartoons more for how they appear on a computer screen or hand held device than how they appear in the printed newspaper. You have to have a lot less detail, it has to be very dramatic, it has to jump off the page, dramatic use of colour, minimum of words, another words ‘boom’! People use to spend ten to twelve seconds looking at a political cartoon in the editorial pages of a newspaper, now it is two-three-four seconds, if even that on a hand-held device. You have to be quick, and you have to be eye catching, often it helps if you are absolutely brutal.

5- What are your thoughts on visiting Cornwall and displaying your work here?

I think it is fun. The thing is communities have satellites. Cornwall like it or not is very much a satellite of Montreal, Ottawa, and even as far away as Kingston and Toronto. So it is fun to reach out. I’ve done this in other communities, where I’ve gone out into the townships, where I’ve gone to Hudson, or far away as Ottawa, and spoken to people, and in fact had exhibitions. I think it is a good idea to reach out and see what is there. We’re going to find out who is here in Cornwall.

Thank you for the interview Terry Mosher.

The Exhibit will take place from September 16, 2015 to October 3, 2015 with Aislin (Terry Mosher) visiting the gallery on Saturday September 19, 2015. More information about the exhibit will be announced at a later date.