Meet the SDSG Federal Candidates in the October 19th 2015 Election 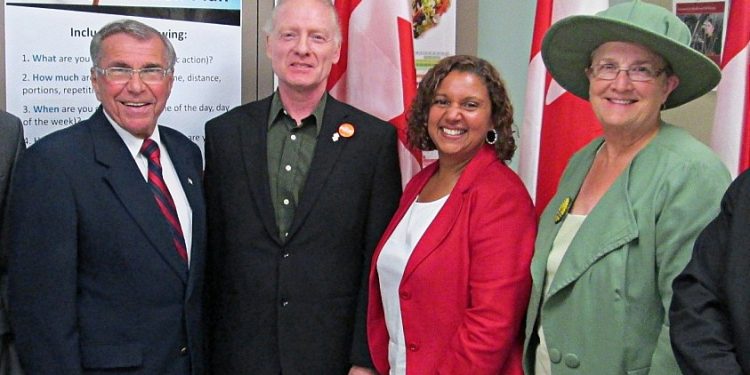 Cornwall Ontario — Millions have already voted in the advanced polls, and millions more will vote on October 19th. Ridings all over Canada including Stormont Dundas and South Glengarry will be electing the next government. For information on how to vote visit Elections Canada.

For information on each party and their leader visit these websites:

Each candidate was asked the same questions: 1 – What makes you the best choice for our Member of Parliament? What is your most significant achievement in this community? 2 – What is the most important Federal issue affecting people here in the riding of SDSG? How will your party address this issue? 3 – Why do you think your party leader is the best choice for Prime Minister?

Here is an opportunity to learn about the local candidates, their qualifications, their priorities, and hopefully this will help you make an informed decision in the ballot booth.

Democracy is a like a muscle, you must exercise it to have a strong one. Learn about the candidates, learn about the political parties, and go vote!

About Conservative candidate Guy Lauzon: He has served as the Member of Parliament for Stormont-Dundas-South Glengarry for the past 11 years. He currently serves as the National Conservative Caucus Chair.

He says he is a well-respected Member of Parliament for his dedicated work ethic and continued visibility throughout the various communities he represents. Guy says he is also known for delivering good customer service to constituents on their issues with the federal government and for ensuring that the local community receives their fair share of federal funding. During Guy’s time as our community’s voice in Ottawa, he says he has delivered major results by lowering taxes, supporting economic growth, and delivering significant infrastructure funding throughout the riding to projects like the Cornwall’s Benson Centre recreation complex, the new International Bridge crossing, the new local RCMP detachment, the South Stormont Municipal Offices, the Iroquois and Morrisburg Wastewater Treatment Plants, and tens of millions of dollars in local road improvements.

Guy also worked to deliver 218 Service Canada call centre jobs in the riding bringing millions of dollars in salaries annually into the area. Guy lives in St. Andrew’s West with his wife France, where he returns from Parliament Hill every night when the House of Commons is in session to attend local events and meet constituents at a grassroots level.

I have been honoured to serve as our community’s representative for the past 11 years. My staff and I work hard to provide great customer service on federal case files.

My proudest achievement was bringing 218 Service Canada jobs to Cornwall. That’s over $13 million in new salaries right in our community. It was a tough fight, but it was a highlight to be able to announce the jobs.

I am also really proud of the many projects we have been able to announce with federal support. The Benson Centre, the wastewater treatment plant, and most recently, the Marleau Avenue upgrades are really good examples of helping with key investments.

2 – What is the most important Federal issue affecting people here in the riding of SDSG? How will you party address this issue?

The economy continues to be the important issue for local residents, and I believe, nationally as well. Our government has been focused on job creation for many years and our targeted investments have made a difference.

We have supported organizations like the Eastern Ontario Training Board to offer programs for young female leaders, people with disabilities, and those who need additional training to get employed. Our government continues to offer more incentives in skilled trades as well, which is key for economic growth here locally.

Additionally, our low tax plan has supported thousands of businesses in our riding, and that has enabled them to grow, hire more employees, and boost the local economy as well.

3 – Why do you think Stephen Harper is the best choice for Prime Minister?

I have had the pleasure of working alongside Prime Minister Harper for over a decade. He’s a tough and decisive leader that has brought Canada through fragile global economic times. Other countries haven’t done as well because they haven’t made the tough, but necessary choices.

Whether it is taking a principled and bold stand on the world stage against Putin or ISIL, or leading our federal government to a balanced federal budget, Stephen Harper is the Prime Minister we need in a fragile world economy and for our country’s security.

About Liberal Candidate Bernadette Clement: She was born and raised in Montreal and attended law school at the University of Ottawa. She’s been a lawyer with the Legal Clinic in Cornwall for 24 years and also serves as Deputy-Director. Bernadette is a Board Member of both the Counseling and Support Services Agency and the Kinsmen Community Residence. She was first elected to City Council in 2006 and was re-elected in 2010 and 2014. As a councillor, she is on several committees, including the Committee seeing to the joint transfer of Federal waterfront properties to the City of Cornwall and the Mohawk Council of Akwesasne.

1 – What makes you the best choice for our Member of Parliament? What is your most significant achievement in this community?
I’ve spoken to a lot of residents of SDSG, and they tell me they are tired of not feeling represented on Parliament Hill. They want a MP who will speak and fight for them in Ottawa, and someone who truly understands their constituents. They want someone who will listen to their concerns and get things done. I know that I can be that person.

2 – What is the most important Federal issue affecting people here in the riding of SDSG? How will your party address this issue?
Families are the backbone of our community, and we need to make it easier for parents to raise their children. The Harper Conservatives childcare program is both ineffective and non-tax deductible. The Conservatives are sending cheques to the richest in our society and are asking for most of it back at tax time. I believe that fairness is the best policy. The Liberal childcare plan gives more money to the families that need it, and less to millionaires, all while cutting the middle class tax rate by 7%. And our plan is tax deductible, so you keep the entirety of your cheque.

3. Why do you think Justin Trudeau is the best choice for Prime Minister?
No other party leader has equaled Justin Trudeau’s ability to connect with Canadians. All across the country, people are coming to his events not only to meet him and take selfies, but also to listen to him talk about the things that matter most to them. There’s a real sense of excitement and energy in the Liberal Party now that hadn’t existed for some time. Also, under Justin’s leadership, the party has been highly committed to creating policies based on evidence rather than ideology. Even in these early days of the campaign, our platform is by far the most substantive and responsible.

About NDP Candidate Patrick Burger: He is a teacher and worked as a professor of English Literature at John Abbott College for the past 18 years. “I believe that education is key to building a stronger Canada and ensuring success for future generations”. He is also the proud owner of a small farm in Lunenburg. “I understand the importance of agriculture to our region and am committed to investing in rural economies. With the NDP, I want to help family farms prosper and remain viable for future generations”. Patrick and his wife Amanda have been happily married since 1998. They have three rescue horses and a cat named Barney.

I have a reputation for integrity and for knowing my own mind. I am not a yes-man, but someone who comes to decisions based on my own values and reflections. I represent a party whose goal is to create a Canada where no one is left behind, and there are needs in this riding that are not being addressed by the current government. My most significant achievement is that a group of like-minded people — passionate, dedicated and motivated by a desire for a fair and just society — the SDSG NDP Riding Association, has chosen me as the candidate in this election.

2 – What is the most important Federal issue affecting people here in the riding of SDSG? How will your party address this issue?

There are so many issues, but if I was to choose one for our riding with an aging population, it would have to be the issues affecting seniors. One third of our seniors face a steep drop in their standard of living when they retire. Poverty is on the rise amongst seniors, particularly women. The NDP will restore the age of OAS and GIS eligibility to 65. We’ll work with the province to expand long-term and home-care services, we’ll reinstate door to door mail delivery and introduce a national pharmacare program so seniors won’t have to choose between buying food or their medication.

3 – Why do you think Thomas Mulcair is the best choice for Prime Minister?

I have been impressed with Tom’s principled leadership and trustworthy character since he quit the Québec Liberal cabinet because of the culture of corruption within the Liberal Party. He’s a leader who can make difficult decisions and who has the experience needed to replace Stephen Harper. As we have seen over the years, Tom knows where he stands — and backs it up with action. His solid character comes from his background: he’s the second oldest of ten kids, and he knows what it means to work hard and live within your means. This is the kind of man we need as the Prime Minister of Canada.

Kennedy was recently sent these questions, and this article will be updated when we get her responses.