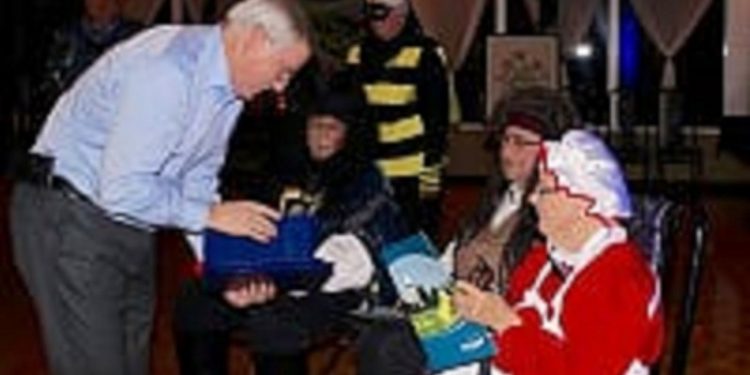 Cornwall Ontario — On Friday October 30th, the Collective for a centre for the arts staged a very successful gala to showcase the lifelong contribution of three giants of local amateur theatre. Edith Styles, Lionel Tessier and Tom Thompson. Among the three of them, Edith, Lionel and Tom served in every capacity, from actors to set designers to directors and producers and contributed over 200 years of drama, cabaret and musicals to grateful audiences. Their achievements laid the foundation of the flourishing theatre scene that animates Cornwall’s arts calendar today. The honorees’ ties to Vagabond Theatre and Seaway Valley Theatre Company are still strong and the good wishes and shared memories of the partygoers from those groups seemed to mean much to Stiles, Tessier and Thompson in addition to the formal awards presented on behalf of the city, the province and in Edith Stiles’ case, from the federal government too.

The gala was the third event organized by the Collective for a Centre for the Arts/Collectif pour un centre des arts, which established itself in late 2013 to engage the broader community in the long held dream of a multi-art culture centre. President John McMartin noted that work on the feasibility study for a centre has begun and called on everyone to celebrate that milestone and participate in the work of the study as it begins its community consultations. John believes the next step will be the release of the subsequent report, and hopes its release will coincide with the Collective’s next event, a Valentine’s Breakfast at the Navy Veterans’ Club in February 2016.

Attendance exceeded over 100 individuals and groups and entertainment was provided by the incomparable duo DJ Shellshock and Madame Mix-A-Lot. Prizes for costumes were provided by the evening’s sponsors, among whom are Benson’s, Cornwall Warehousing, Pommier’s Jewellers, Life’s Little Pleasures, Gordon Jewellers, Laura’s Fine Flowers, Physical Limits, Schnitzel’s, Best Western Parkway Inn and Conference Centre, Home Hardware, Carolyn Davis and Shoppers’ Drug Mart. The major sponsor was St-Alberts Cheese Co-Operative, through whose generosity each guest was given a trick-or-treat bag of fresh curds as they entered. The Collective draws great inspiration from St-Albert cheese plant, which overcame great challenges to rebuild after its disastrous fire. The arts centre will be a tremendous challenge, McMartin acknowledges, but he insists it’s time, long overdue in fact, for Cornwall to have a centre for the production, display and making of the various arts. Acknowledging the breadth and strength of artistic activity in the city, John quoted the Collective’s logo: “We have the arts. Now let’s build them a home.”