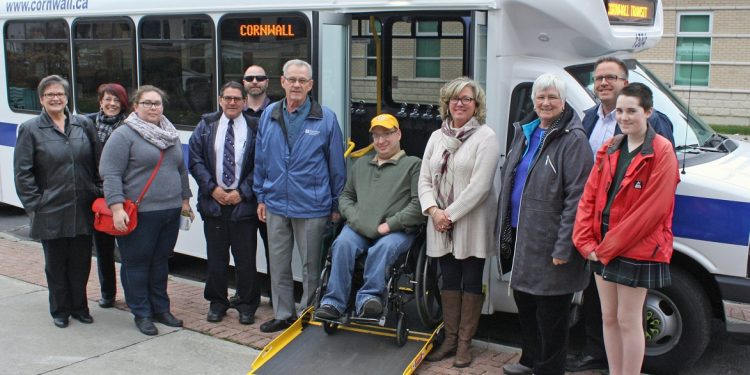 The two new buses from Creative Carriage Ltd. arrived earlier this month and the maintenance staff at Cornwall Transit has been busy preparing them for the road by adding the familiar blue and white stripes and installing fare boxes, bus radios, antennas and other equipment.

A typical Handi-Transit bus travels about 35,000 kilometres in a year and the service itself provides an average of 41,000 passenger trips annually.

Members of the City’s Transit Committee got a first-hand look at one of the new buses following a committee meeting on Thursday and they were quite impressed with what they saw.

The buses cost $180,500 each and Cornwall Transit is also waiting on delivery of a new conventional bus ($482,000) in early 2016. These investments are being financed over an 8-year period and the City is using a portion of the provincial gas tax funds it receives annually to cover the cost.

The bus acquisitions formed part of a joint purchase that Cornwall Transit participated in through Metrolinx, a Crown Corporation charged with administering urban transit projects in Ontario. Through this Transit Procurement Initiative (TPI), the City was able to save money by reducing unit costs through higher volume purchases and performance-based specifications, avoiding duplicate procurement costs while improving product quality.

With the new acquisitions, the average age of the Cornwall Transit vehicle fleet now stands at 10 years and the goal is to reach an average age of 6-7 years. The normal life cycle of a Handi-Transit bus and a conventional bus is 8 and 18 years, respectively.