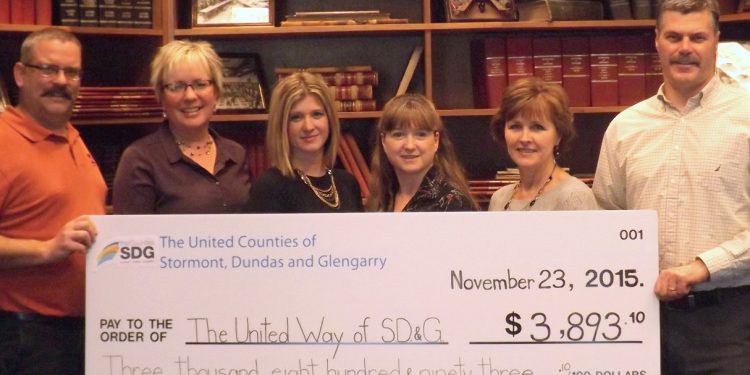 “The United Way is very thankful for the support and partnership with the United Counties SDG”, says Michael Galvin, United Way SD&G 2015 Campaign Chair. “Year after year the staff continues to surprise us with their dedication and the size of their donation. Without partnerships like this there is no way we could ever reach our fundraising goal”.

United Counties of SDG raised funds for the United Way Campaign through employee payroll deductions and special events such as a staff breakfast and raffle. United Way also recently received a donation of $3,500, proceeds from the Warden’s Golf Tournament. “As always, we are extremely grateful for the support received by United Counties of SDG – thank you for being United Way Champions!” stated Lori Greer, Executive Director.

“Staff at the United Counties of SDG are behind the United Way 100%”, said Tim Simpson, United Counties Chief Administrative Officer. “We live and work in this community and can see the benefits our contributions make to enrich the lives of our neighbours, friends and family”.