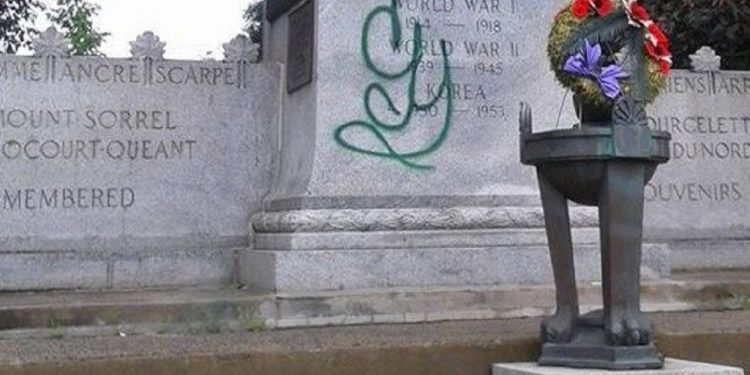 Cornwall Ontario – The Cenotaph located on Second Street West in Cornwall Ontario was vandalized with spray paint graffiti. There have been two updates since the story was originally published. There has been an arrest and the War Memorial was also cleaned of graffiti.

UPDATE (Tuesday July 12 2016): Dustin O’Byrne, 21 of Cornwall was arrested on July 11th, 2016 and charged with mischief to a war memorial, four counts of mischief and breach of probation. It is alleged sometime between July 9th and July 11th, 2016 the man spray painted letters on cenotaph located at the Legion Memorial Park on Second Street. It is also alleged the man was responsible for spray painting four other buildings in the area of the war memorial. Police were contacted and an investigation ensued. As a result of the investigation, members of the Criminal Investigation Division along with Community Patrol were able to form grounds for the arrest of O’Byrne. On July 11th, 2016 the man was located by police, taken into custody, charged accordingly and held for a bail hearing.

UPDATE (Monday July 11th 2016): City Councillor’s David Murphy and Carilyne Hebert both confirmed on social media that staff from the City of Cornwall’s Parks and Landscaping Department have restored the Cornwall Cenotaph to it’s proper state, and that the graffiti was cleaned off by 9am Monday morning.

This is the spot that hosts the annual Remembrance Day ceremony.

Last November Lieutenant General Marquis Hainse was at the Cenotaph for the City of Cornwall’s Remembrance Day ceremony which honours veterans and those who lost their lives in war.

Many in the community have expressed sadness and disbelief over this vandalism including a City Councillor and a former MPP.

“I’m saddened to see the Cenotaph vandalized. It is a monument to our glorious dead and deserves the utmost respect,” said City Councillor Justin M. Towndale.

“I’m saddened to learn of this cowardly act of vandalism towards Cornwall’s cenotaph and all that it represents. It boggles my mind that an act of disrespect, like this, was made to a monument that should be regarded as sacred. When will they ever learn the meaning of respect and remembrance?” added former MPP and Honourary Lieutenant-Colonel of the Stormont, Dundas, and Glengarry Highlanders, Jim Brownell.

A spokesperson for Friends of Vets, who’s uncle was killed while serving in World War 2, shared what the Cenotaph means to him.

“It is disturbing to see this type of action done. You figure that people would know better. I guess we have not been teaching enough about respect and some people are not learning what the meaning respect is. Early in this year we had people swimming in the fountain at the Cenotaph and we now have graffiti. So some people just do not get what this area is about.  My uncle was killed in WW2 and his name is on the Cenotaph. It is a special place for many, many people. Maybe we could all take some time and think about respect and learn and talk about why somethings need to be respected. Who ever did this, it is disrespectful, senseless action obviously does not get the meaning of what War Memorials are all about and why the names are on it. The names put on there gave their all to keep us free and to help make this world a better place,” said Steven Forrest who was a cook in the Canadian Military, the Facilitator for Friends of Vets, and also a Legion member for 32 years.

The local Legion President also thinks education about the Cenotaph is needed.

“I am appalled at these acts of vandalism to our Cenotaph. So much disrespect for our fallen Comrades who gave the ultimate sacrifice so that we as Canadian citizens could enjoy our freedom. These (culprits) should be to sit with our Veterans and listen to their stories, find out what they went through and are still going through, maybe then they would have some respect for the Veterans and others and they might understand why we have these Cenotaphs,” said Linda Fisher who is President of the Royal Canadian Legion Br. 297 Cornwall.

The City and the Cornwall Police are aware of the situation. There are plans to clean-up the Cenotaph as quickly as possible.

“The City is aware, police have been notified, and the City will be looking at getting it cleaned up as soon as possible,” said Kevin Lajoie who works for the City of Cornwall on Sunday night.

The perpetrator(s) of the Cenotaph vandalism could also be responsible for other acts of vandalism around the City. Some people have said they recently witnessed similar graffiti tags on other Cornwall buildings and properties.

A photo of this vandalism was posted earlier today on Facebook with the hopes of finding the culprit.

If you have any information concerning this crime please call Crime Stoppers at (613) 937-8477.