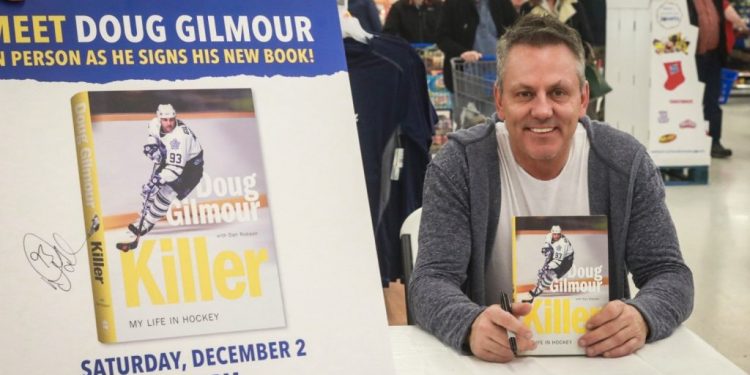 “Killer: My Life in Hockey” is the name of his new book co-written with Dan Robson and published by Harper Collins.

Hundreds lined up, many wearing Maple Leafs jersey’s, to meet the hockey legend best known for his killer instincts on the ice.

Those same killer instincts helped Doug Gilmour and the Cornwall Royals to win the Memorial Cup championship in 1981. A mural of Doug Gilmour can be found on a wall inside the Cornwall Civic Complex where the Royals use to play hockey.

“I think one of my fondest memories would be coming off the bus from Windsor after we won the cup. It was a great year for the hockey team and something that I will always cherish,” Doug Gilmour reminisced.

Doug Gilmour was drafted to the NHL in 1982. Over the span of 20 NHL seasons he played with the St. Louis Blues, Calgary Flames, Toronto Maple Leafs, New Jersey Devils, Chicago Blackhawks, Buffalo Sabres and Montreal Canadiens.

He has had many career highlights, including scoring the Stanley Cup game winning goal for the Calgary Flames in 1989.

In 1993, Doug Gilmour helped bring the Toronto Maple Leafs to the brink of the Stanley Cup finals with a team record 35 playoff points during that run. However a controversial missed call – a Wayne Gretzky high stick against Gilmour not seen by the referee – would change the momentum of that game and series.

That same year, Gilmour was the recipient of the Frank J. Selke Trophy, and runner-up to Mario Lemieux for the Hart Trophy.

What stories will hockey fans enjoy reading the most in his new book?

“It’s up to every individual. There are all kinds of different stories from my siblings telling it, to my friends, and teammates. They’ll have to read it and choose their favourites,” Gilmour stated.

Towards the end of 2002-2003, Doug Gilmour was traded from the Montreal Canadiens to the Toronto Maple Leafs. He played one final game with the Leafs to end his NHL career.

He became the coach of the Kingston Frontenacs of the OHL, and now he is their General Manager.

How will the Frontenacs do this season?

“We’re doing okay right now. I don’t do predictions, but we want to make sure we make the playoffs,” Gilmour replied.

Hockey fans enjoyed the opportunity to meet Doug Gilmour and get their book autographed.

For those who missed the book signing today, there is still a chance to pick up a copy before the holiday season. According to the book’s description: “His memoir is as revealing as it is hilarious… and his love for the game and for life are legendary”. It will make the perfect gift for any hockey fan.

This was the final stop for Doug Gilmour on his book tour across Canada.

Nats fall to Wolves in shootout