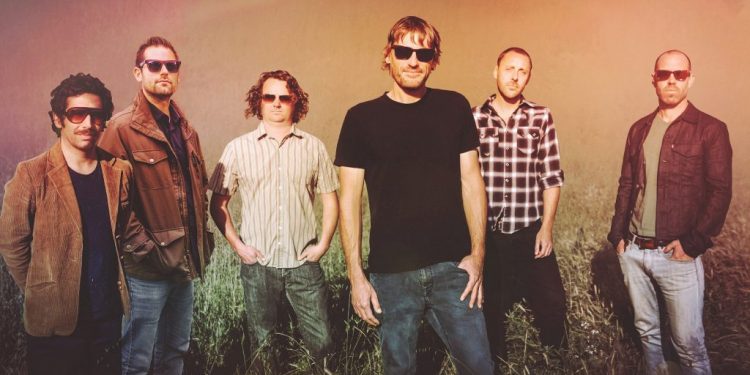 “It’s been in the conversation for years. Finally, Fat Mike started talking seriously about it, and we decided to do it. It was nice having Fat Mike around. We went through a couple of weeks of deciding the songs, going back and forth through email. Some of the first suggestions were good songs but didn’t translate so well to reggae. Once we had a good ten ideas, we went to San Francisco and laid down the basic tracks. It was nice, we agreed on most things. Occasionally we’d have some differences of opinion, and we would work it out, but overall it was very smooth and enjoyable. We’ve known Mike for a long time and are used to his unique and interesting personality traits,” Mad Caddies guitarist and co-founder Sascha Lazor said.

Mad Caddies recently released a single for the Green Day cover song “She.” Sonically, the song has a reggae and ska vibe.

“Yes, all the songs are reggae, with two ska songs, and one 60’s garage/soul kinda vibe,” Lazor explained.

On Punk Rocksteady, the Mad Caddies cover Bad Religion, Operation Ivy, Misfits, Descendents, and more. The song selection process proved to be challenging at times. The band wanted songs that translated well to reggae, and to have some lesser known tracks selected too.

“Picking the songs was kinda time-consuming because like I said, Some songs didn’t translate so well to reggae. Once we picked the songs, it was fairly straightforward. Mike picked the Descendants song. We kinda wanted to do something like “Good Good Things,” but Mike also wanted some lesser known tracks. We didn’t want every song to be the generic, obvious popular song from that band. We wanted a mix of something very well known like “She” all the way to “Jean is dead,” Lazor reflected.

It was Mad Caddies vocalist Chuck Robertson who suggested which Nofx song to cover for the album.

“The Nofx song was difficult. Obviously, Mike cared about what we picked. Chuck Robertson suggested “She’s Gone”. We all loved the idea till we had to learn it. That song is a pain. It’s always changing. We kind of had to learn it piece by piece. But it’s one of my favorites on the album for sure.

There are songs that the Mad Caddies recorded, that didn’t make this album, and will be released or used at a later date.

“Yes, we did a Balkan/klezmer/reggae version of “Blood Stains” by Agent Orange. It didn’t make the cut. It will be used for something in the future. It ’s very unique and very Mad Caddies sounding now. We also did a version of “Thieves” by Snuff. No vocals ever got laid down on that one, but I’d like to finish it up one day. I think it’s cool. It was a dark, cumbia kinda vibe,” Lazor disclosed.

This August 2018 marks the 20th anniversary of Mad Caddies on Fat Wreck Chords.

“It’s been great on Fat Wreck Chords. We’ve toured with a lot of the bands and have become good friends over the years. And the actual label has always been great to us. It’s a beautiful thing after all these years to have that kind of history with them. There is lots of support from Fat Wreck Chords.

Mad Caddies return to Montreal on May 9th with a concert at the Corona Theatre.

“We can’t wait to get there. It’s been a long time, and Montreal is one of our favorite cities. I used to live there and have some great friends and very fond memories. We’re also Putting together a nice set list that will have tons of old songs as well as some of the new covers. That’s the nice thing about this album is we don’t have to worry about people not knowing the songs,” Lazor concluded.