by Jason Setnyk
in 5 questions with..., News and Announcements
Reading Time: 4 mins read
92 7 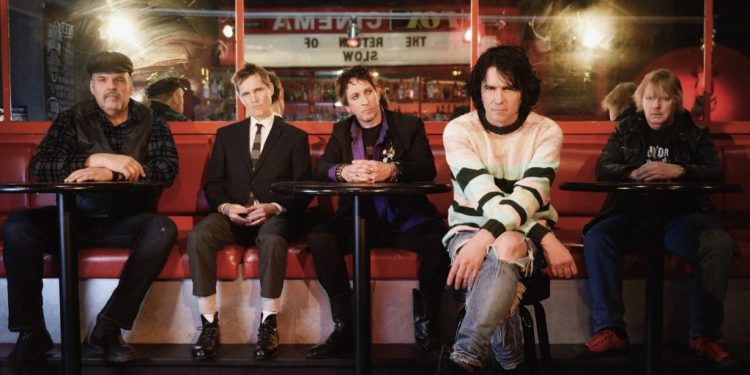 Montreal, Quebec – After a series of sold-out reunion shows on the West Coast, one of Canada’s most influential bands is ready to show the rest of the country what all the hype is about. See SLOW live on Saturday, May 12th in Montreal at Casa Del Popolo.

SLOW was formed by Thomas Anselmi, Christian Thorvaldson, Stephen Hamm and Terry Russell. Ziggy Sigmund was added to the line-up soon after as a second guitarist. The band released the 7” I Broke the Circle in 1985, followed by Against the Glass in 1986, which featured the legendary “Have Not Been the Same,” one of the most iconic songs in Canadian music history.

It is almost impossible to overestimate the effect of the band on Canadian music. Formed in the mid-80s in Vancouver, and releasing only one album and one 7” on Zulu Records, the band has consistently been called one of the most influential punk rock bands in Canada and forerunners of the Seattle grunge scene. Perhaps most infamously, SLOW is also the band that brought Expo ‘86 to its knees when The Xerox Theatre was canceled in the wake of their incendiary, politically charged performance.

“There have been a lot of wild rock ‘n’ roll bands in Vancouver,” says Vancouver Sun journalist John Mackie, “But SLOW took it to a new level.”

In August of 2017, spurred by the re-release of the SLOW catalogue on Artoffact Records, the band reformed.

1 – Tell us about how your tour in Western Canada went?

The shows have been good. We hadn’t played together in so long but it felt odd as if no time had passed. My fear was that it would be dead musically, a nostalgia thing. It feels lucky to be playing some rock and roll. Real rock and roll is a rare music nowadays and we seem to be some of the last people that can play it.

2 – What do you remember most about the Expo ‘86 when The Xerox Theatre show was canceled in the wake of an incendiary, politically charged performance?

The action at Expo, which was essentially a protest, wasn’t focused on any particular issue. The displacement of the poor on Vancouver’s downtown east side was disgusting, and that was the main reason other bands had chosen not to play, but our protest was something more abstract. We simply had the desire to express an alternative to the corporate takeover of the city that was in its infancy at that time. We had been invited to support that takeover and in essence, help sell it to the rubes. This marketing of Vancouver by a bunch of two-bit backwoods hucksters was gross to us and we wanted to make it clear that we stood apart from it, that we were real and free. It wasn’t about specific politics, it was free expression where free expression wasn’t wanted but was needed.

3 – Do you feel songs like “Have Not Been the Same” were ahead of your time? Sonically and visually it helped influence the grunge movement of the early 90s. Do you feel like trailblazers?

Grunge was in the air and was essentially when punk rock finally merged with it’s, more hidden, hard rock influences. Punk had become very conservative and was focusing on community politics. This seemed like a new form of conformity to me and it was fun to rile those people, who were intent on projecting their half-baked ideas onto the rest of us. Mixing the music that got you beaten up with the music of the ones doing the beating was hard for some people to accept.

4 – There is a new album that is in the works with Dave (Rave) Ogilvie producing. What can you tell us about the new album and working with Dave?

Dave Ogilvie is a brilliant guy. He has a deep understanding of the studio and how to best create an atmosphere and framework where good things can happen. We also decided we wanted to record to tape, not so much for the analog sound but for the set of limitations it imposed- we’re making this new album without the use of digital editing or tuning. Rave can roll with anything and everyone has been working with him for decades on various things. He gets great sounds and is a close friend, so it’s really a nice situation and has already led to fantastic results.

5 – What can you tell us about your new members and what they bring to the band: Kurt Dahle (New Pornographers), Vanessa Dandurand (The Ballantynes) and Jody Glenham (The Dreamers). Will they be on the new album? Are they touring with you for your Eastern Canadian dates?

Yeah, right away I saw that the way to Make Slow Great Again was to put on an updated version of a real old-fashioned show. It’s loose, tight, random, rehearsed. It’s like seeing a revival from the 60s, but now, and all the players are tremendously talented. It’s such a great feeling to hear those vocals in have not been the same. We could never afford to have singers back then. This is the show we always wanted to do.

6 – What would you like to say to your fans in advance of your May 12th show in Montreal at Casa Del Popolo?

Just come see us. My friend and I went to see James Brown a decade or so ago and I told him, really take it in, it’s the last time you’re gonna see this. And that’s what this is like- a mammoth, frozen in Arctic ice, thawed and somehow lumbering around. Come and see the mammoth before it realizes it shouldn’t be lumbering and falls over and dies. We’re going to make sure you go home having had an experience. Get a little bit free with us.

Tickets for the Montreal show are just $22.