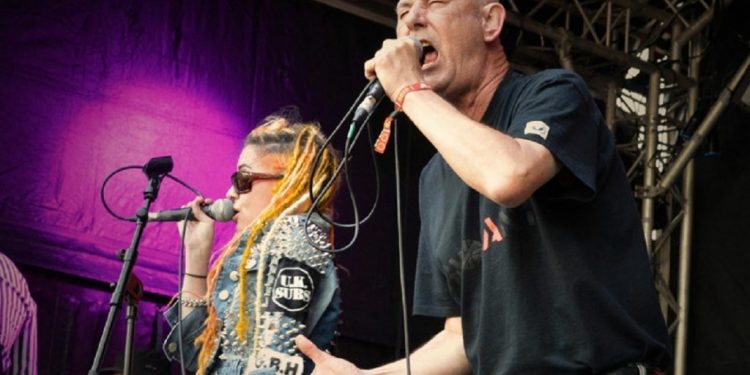 Singer/songwriter Steve Ignorant co-founded Crass with Penny Rimbaud in 1977. Their debut album titled The Feeding of the 5000 included songs such as “Punk is Dead,” “Fight War, Not Wars,” “So What?” and “Do They Owe Us A Living?”.

Crass released 6 LPs before splitting up in 1984, but not before they faced the ire of Margaret Thatcher and her Conservative Party for their criticism of the Falklands War. Conservative Party MP Timothy Eggar wanted to prosecute Crass under the UK’s Obscene Publications Act. A year later The Dead Kennedy’s were prosecuted under a similar law in the United States spearheaded by Tipper Gore and the PMRC.

According to Steve Ignorant, the political and lyrical ideas of Crass are just as relevant today. There are similarities between the current Trump administration and that of the Reagan and Thatcher style conservatism of the late 1970s and early 1980s.

“Unfortunately, those Crass songs are still as relevant today, all you have to do is change certain names. I was saying to somebody the other day that I was reading Charles Dickens and that I realized not a lot has changed since that book was written. Dickens writes about poverty and depression, homeless people and child exploitation – just look around in the streets today. Oppression by world leaders has been going on for centuries – Reagan, Thatcher, and Trump were or are a part of that – I suppose the monster has many guises,” Steve Ignorant replied.

A song like “Fight War, Not Wars” still has as much meaning today as it did 40 years ago. What does that say about humanity if a song like that is still relevant today?

“It says that this world is still run by megalomaniacs who stop at nothing in their greed for power. I’ve been fighting against those idiots for 45 years, and I’m damn well fed up with it,” Steve Ignorant added.

The Crass song “Punk is Dead”, which has been played over a million times on Youtube, is also still relevant. Two well-known punk bands responded lyrically to that song. Exploited said “Punk’s not Dead”, while Jello Biafra of the Dead Kennedy’s penned “Punk’s not dead, but it deserves to die” in the song Chickenshit Conformist. According to Steve Ignorant, each band got it right in their own way.

“We were all right. The song Crass wrote said “Punk is dead” in the sense that it had been bought up by the corporations – whereas before as a punk you made it yourself and created your own identity. When you could just buy the punk uniform in the high street, it was just another fashion”, Steve Ignorant replied.

Crass went on to inspire many bands, and some artists have revisited their music over the years. For example, anti-folk artist Jeffrey Lewis recorded an album titled 12 Crass Songs. The Jeffery Lewis album creatively covered many poignant Crass songs including the feminist anthem “Walls”.

“I felt with Jeffrey Lewis that some tracks worked better than others, but it was great to hear someone interpret those songs in such a different way,” Steve Ignorant stated.

After Crass, Steve Ignorant played in Conflict, Schwartzeneggar, Stratford Mercenaries, Current 93, and Thought Crime. Also, Steve Ignorant is a wood sculptor. Furthermore, he volunteers on the Sea Palling Independent Lifeboat. Additionally, he has penned an autobiography titled All The Rest Is Propaganda.

In 2011, Steve Ignorant was joined by former Crass members Rimbaud and Eve Libertine in 2011 for a concert performing The Last Supper. Steve Ignorant is still in touch with some members of Crass, but there have been no talks about future collaborations.

“I’m still in touch with some members of Crass but no talk of a reunion or anything like that. But if me and Pen, for example, decided to do something together then that’s a possibility,” Steve Ignorant disclosed.

Steve Ignorant with Paranoid Visions is looking forward to playing the ’77 Montreal Festival. Two years ago, he played Rockfest in nearby Montebello, Quebec. He welcomes the opportunity to play in La Belle Province again.

“I’m really looking forward to it, and I’ll be hanging around so if anyone wants to come and say hello feel free,” Steve Ignorant concluded.

Also playing ’77 Montreal on Friday, July 27th at Parc Jean-Drapeau is Rise Against, AFI, Suicidal Tendencies, Me First and the Gimme Gimmes, Anti-Flag, The Interrupters, Sick Of It All, L7, D.O.A., The Rezillos, Planet Smashers, Jeff Rosenstock, No Policy, Iron Chic, and more. Tickets for the festival are $70.