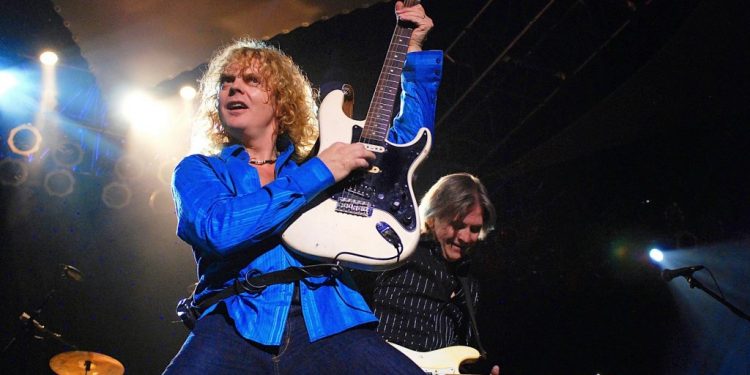 Cornwall, Ontario – Carl Dixon Sings the Guess Who are the headline band for the third day of Cornwall Ribfest on Saturday, July 28th, 2018 at Lamoureux Park. This tribute to the Guess Who features former members of the legendary Canadian rock band. Carl Dixon (vocals) will be joined Bill Wallace (bass, vocals), Laurie MacKenzie (guitar, vocals), and Mark Santer (drums, vocals) – each of whom played in The Guess Who.

“As the title of my show suggests it will be a night of The Guess Who hits. I was the lead singer of the band, the Burton Cummings substitute, for about eight years during two different runs. I also have Bill Wallace, a former member of the band who wrote some of their hits (e.g., “Clap for the Wolfman”) playing bass and singing with me. He was a part of the lineup for ten years with The Guess Who. Also, the guitarist Laurie MacKenzie, and the drummer Mark Santer (filling in for Garry Peterson) were in The Guess Who. It’s all people who played in The Guess Who to various extents and playing a full show of The Guess Who hits,” Dixon explained.

Carl Dixon was the vocalist of The Guess Who from 1997-2000 and again from 2004-2008. Between his two stints in The Guess Who he was the guitarist, keyboardist, and a vocalist for April Wine between 2001 and 2004. He was also the vocalist and guitarist of Canadian hard rock band Coney Hatch touring and opening for bands like Iron Maiden and Judas Priest, and receiving music video airplay on MTV.

What is Carl Dixon’s fondest memory playing in The Guess Who?

“My fondest memory in The Guess Who was probably when we recorded our live album in a theatre in Chicago. My daughter was little, and she got on stage and played tambourine with us. She was five years old and it was the first time she flew on an airplane – and just to make the show. It was a fun night,” Dixon reminisced.

What are Carl Dixon’s favourite The Guess Who songs to play live?

“I love singing “These Eyes” because it’s such a brilliantly written song and people respond to it so positively. It’s a nice challenge for a vocalist; you must be able to sing to do that song. I like the rolling feel of “Running back to Saskatoon” as well. It has a cool groove from the guitars, and the bass and drums work so well together. It’s so Canadian and it’s my pick for a more rocking song,” Dixon noted.

“I love the music. A Guess Who 45 is the first record I ever bought when I was a little boy. They were the first band I ever saw in concert at the CNE grandstand one summer, where I would end up playing the CNE ten years later, and I ended up in the band many years after that. It was all connected I suppose,” Dixon stated.

When Carl Dixon auditioned for The Guess Who, his previous experiences made him ready for that moment.

“Because I had so many big-time experiences before that – a record deal, being on MTV, being on the radio, big tours, meeting all kinds of people that I saw on the radio or in magazines, and now I was one of them – so it seemed like I could do this. It would be a good next step, because I know I can sing this music, and I enjoy this music. It was still a thrill to get the chance, but I wasn’t overawed by it. I felt I belonged here. The confidence I got getting a record deal with Coney Hatch at 21, being internationally released and recognized at such a young age, gave me the confidence to take on anything in music in the years that followed,” Dixon explained.

The road to becoming a professional music began at ten years old for Carl Dixon when he got his first guitar, a hand me down, from his uncle. It wasn’t the greatest guitar.

“My first guitar was a really bad hand me down from my uncle when I was ten years old. It was so cheap it was hard to pull the strings down. It hurt my little fingers trying to play that. I got discouraged and gave up after six months and decided that I hated the guitar. I grew up, and I got more interested in music. I played drums next and did that all through high school. I was also interested in singing, and was a mad fan of the music and got deeply into it. I got offered to join a band because I could sing the Doobie Brothers, and no one else there could sing that high. I pretended to remember how to play guitar from my lessons and went home and practiced like crazy. I joined my first band when I was 15, I was in high school in Barrie, and ended up playing with some musicians in their early 20s. At the time they seemed so old to me, but they had a band, and there I went,” Dixon said.

Carl Dixon joined Coney Hatch and co-wrote many of their hits, such as “Hey Operator” and “Devil’s Deck”. On his first major tour with Coney Hatch,  they hit the road with Judas Priest. He learned a lot from that experience.

“Coney Hatch was my first big-name band. It was a big learning curve when we played our first big tour with Judas Priest. We started out in Quebec City with them and went right across the country, and down the western portion of the United States. We had a couple of opening spots with Trooper and one big show with Ted Nugent at the CNE in Toronto before that. We were doing club shows opening for people like Eddie Money and Edgar Winter and Peter Frampton before getting the call for the Judas Priest tour. It was kind of like going to University, none of us had gone to University, so this was our training for the things we had to learn. We learned about professionalism, how to convey things in a big space so that the whole arena feels something from you. We also learned to structure it to do it consistently the same way every night and make sure that you always deliver and are ready to perform. To reach out to the audience with big gestures. Having the lights and sound coordinate with our efforts. There were so many details. Also, how a band conducts themselves when they are not on the stage,” Dixon reflected.

In addition to MTV airplay, Carl Dixon’s music could also be heard elsewhere on television. This includes the song “Taste of Love” which he co-wrote. It aired on an episode of Baywatch, and in a scene with iconic actress Pamela Anderson.

“I was working with a now-deceased friend of mine Brett Walker, who had a hit with the group Alias called “Waiting for Love” in the 90s. We were writing a bunch of songs down in L.A., and we had this idea for a song called “Taste of Love.” We weren’t the wild rocker kind of guys; we were the kind of guys who were shy to write songs about wanting a girl or telling her she’s sexy. We had to get over our inhibitions. We would write a line back and forth, pass a piece of paper back and forth. We had a title called “Taste of Love.” I would write the first thing that came to mind and pass it across the table to him, and he would write the first thing that came to mind. Back and forth, we went that way, and it enabled us to get out of our inhibitions and being locked into ‘oh I can’t say that’. We did that for a couple of hours until we had eight verses. We went for lunch, came back, and selected the best three, and suddenly we had a pretty good song. It got me my publishing deal. They put it in front of Jim Jamison who was the singer of the theme song of Baywatch. He was looking for more material and recorded that. They worked it into an episode called “Lifeguards Can’t Jump” where this is a fellow following Pamela Anderson everywhere, so they put my song with a scene featuring Pamela Anderson striding down the beach in her bathing suit,” Dixon responded.

Life was going great for Carl Dixon, until 2008 when tragedy struck. Carl Dixon was in a serious car accident while in Australia, so serious that it could have ended his life.

“What happened to me is about as serious as it can get. By any measurement, I shouldn’t be alive today from the things that happened to me. A lot of things went right and fell into place after things went so disastrously wrong. I was in Australia, and I forgot to drive on the other side of the road there – simple as that. I had a head-on collision at night with a guy. I was totaled, broken to pieces, ripped apart, but I got amazing medical attention and care. Who knows how many angels were hovering over me to get me through that night. After many months in the hospital, I emerged. One of the main things I learned is how important it is to do things now. Don’t wait for some later date and figure I’ll get to it. If it’s important, do it now because we don’t know when things will end. There are so many things I’ve learned. The importance of kindness, and how much of a difference it makes when you’re kind, and the world can feel that and kindness comes back to you. I had a motto I told myself every day in the hospital: no fear, no weakness. I would say that over and over to myself through the day. I was so badly hurt, I couldn’t even turn myself over on my side on the hospital bed without the help of two nurses. I was immobilized for a long time, and I loss The Guess Who job because of that accident. I couldn’t return to it for a few years, so they had to move on. I learned the power of our own thoughts. The doctors in Australia told me I was the most determined patient they had ever seen, and that’s what made all the difference in my survival and my recovery. The thoughts we hold and carry each day with us are important,” Dixon replied.

Derek Sharp replaced Carl Dixon in The Guess Who after the accident. Now recovered, Carl Dixon is playing music again. He is paying tribute to The Guess Who, and playing Cornwall Ribfest. But this will not be Carl Dixon’s first show at Lamoureux Park in Cornwall. He played Lift-Off 2004 in Cornwall with April Wine. 8 years later Cornwall’s own Roy Nichol joined April Wine.

“Yes, their new guy, Roy Nichol, is from Cornwall. I played the Waterfront (Lift-Off) festival in Cornwall with April Wine in 2004 I believe. I look forward to playing Cornwall again, and playing all the hits of The Guess Who,” Dixon concluded.

Cornwall Ribfest takes place from July 26th to July 29th. The music lineup on Saturday, July 29th is Grungebot, Shelter Valley, Radio Nova, Coldrift, Mena Hardy, Capital Beatles, and Carl Dixon sings The Guess Who. The music on Saturday starts at noon, and Carl Dixon sings the Guess Who starts at 9:30 pm. For more info on Ribfest and the bands playing each day visit their website.

Marijuana Legalization in Canada What Does it Mean