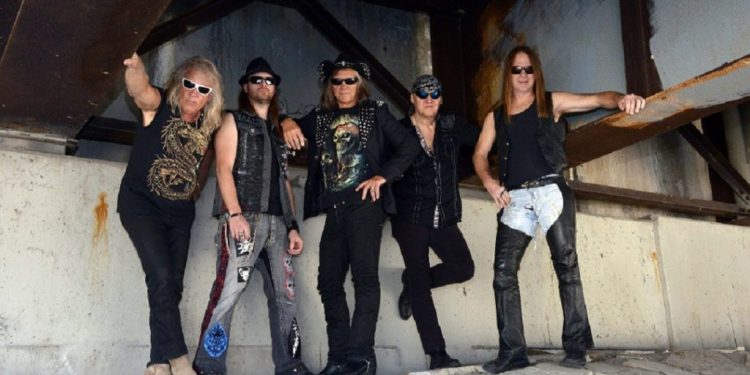 Helix, who will be celebrating their 45th anniversary next year, recently released a Greatest Hits CD called ICON.

“They asked me what I thought should be on there. I also offered a few songs I own the masters for, like “Good to the Last Drop, and “Running Wild in the 21st Century” and it came together nicely. Most of the songs were done when we were signed to Capitol EMI U.S. in Los Angles. Over the years the ownership of those masters reverted back to yours truly,” Helix frontman Brian Vollmer explained.

The bands biggest hit was the song “Rock You” that came out in 1984 on the album Walkin’ the Razor’s Edge. The lyric “Gimme an R, O, C, K,” was very popular with fans. The song reached #32 on the Canadian Billboard charts. Brian Vollmer’s autobiography also refers to the song, because it’s titled “Gimme an R.”

“At that point in our career we had released the album No Rest for the Wicked and “Heavy Metal Love” was a big hit for the band. The song “Rock You” was written by Bob Halligan in New York and came to us through his manager Barry Bergman. The song was the chorus, the verses were irrelevant. I changed the lyrics and verses but never got a writing credit because Barry Bergman didn’t believe that was instrumental in the song being a hit. He basically said take no credit, or we’ll take the song somewhere else. We didn’t want to lose the song, so we passed on the credit,” Vollmer said.

“The song was first played at the Alrosa Villa in Columbus, Ohio – the same venue Dimebag Darrell would be murdered in many years later. When we played the song for the first time there, it was an immediate success. We recorded the song, and it appeared on the album Walkin’ the Razor’s Edge, and the rest is history,” Vollmer added.

Helix was not immediately signed to Capitol Records. It took persistence and tenacity to get signed to a major label.

“We were rejected many times, and some of the labels were even angry we had the audacity to approach them with such an inferior product as one executive (of a major label) complained in a letter. I saved the letter, and have it framed in my basement. That’s a part of the career every band goes through. You’re not going to be accepted the first time. You must keep getting up and taking a swing at the ball and believe in yourself until you make it happen. It took us many years until we got signed to a major label. Persistency is what you have to have in the music business, especially nowadays,” Vollmer responded.

Helix has toured extensively with bands such as Kiss, Aerosmith, Rush, Mötley Crüe, Alice Cooper, and Motörhead among others. Touring with Lemmy Kilmister was a personal favourite for Brian Vollmer.

“My fondest memories were touring with Motörhead. I have the utmost respect for Lemmy Kilmister. He is about as genuine as you can get. He’s just a very nice person. I loved going on tour with them, it was great,” Vollmer recollected.

Brian Vollmer has also made cameo appearances on Trailer Park Boys. Also, Helix was revealed to be Ricky’s favourite concert to see on the show.

“There was an episode where they had a monologue and it kind of went from there. I ended up doing a tour with the guys. Later I was in the movie Trailer Park Boys: Countdown to Liquor Day. This week I’m in the Maritimes and just did an episode of SwearNet on Tuesday morning, and it was released on Thursday,” Vollmer noted.

In addition to Trailer Park Boys, “Planet Helix” was featured on a 2007 episode of MTV Cribs.

“They came to the house many years ago and spent the whole day filming for seven minutes of footage. It got lots and lots of exposure. There was a time for about a year when you couldn’t rotate through the channels and not see a commercial about our house. It helped keep the bands profile up for that period,” Vollmer replied.

The band members of Helix are looking forward to playing Heavy Montreal, and to see their friend (Metal Queen) Lee Aaron again.

“It’s going to be nice coming back to Quebec. I always liked the City of Montreal. It’s a great opportunity to come back to the province. We just played with Lee Aaron last Thursday in Red Deer, Alberta, and it was a great show. We’ve been friends since the 80’s. It’ll be great to hang out again,” Vollmer disclosed.

“We give it 110%, we play all the hits, we play a couple of new songs, and after the show, we always go to the merchandise booth and meet fans, and get pictures taken. We stay as long as they want us to stay. If it weren’t for the fans, we wouldn’t be around nowadays. For a band that doesn’t get that standard commercial radio airplay, we need that connection with the fans. We’ve always had a very grassroots approach to our music,” Vollmer concluded.

General admission for Heavy Montreal is $165, and tickets can be purchased online or at the gate.

Cornwall Ribfest 2018 welcomes tens of thousands from far and wide