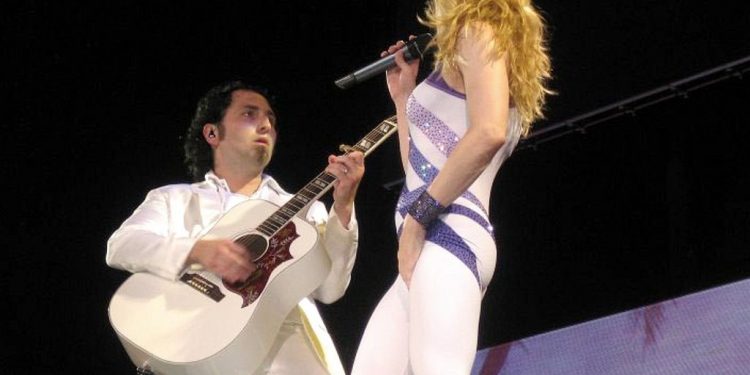 Los Angeles, California – Monte Pittman, perhaps best known as the guitarist of Madonna, demonstrates a myriad of talent with his two new solo albums set to be released on August 31st. The albums titled Better Or Worse and Between The Space are both coming out on Metal Blade Records. The acoustic album and the heavy album show respectively that not only is Monte Pittman an elite guitarist, but he is also a top-tier vocalist and a creative songwriter. For Monte Pittman releasing the two albums at the same time made sense – because sometimes he plays acoustic shows, and sometimes he plays heavy shows. This way he has something for all his fans.

“As a guitar player, I love playing both. Sometimes I only have the capabilities to do an acoustic show. Some people like my acoustic music. Some people like my heavy music. Some people like both. There are people who only like one or the other. I like having something for everyone. Releasing two different albums at once is something I don’t know if anyone else has ever done so I thought that was interesting. For my live show, I wanted to have some acoustic songs that were heavy and a faster tempo. I also wanted some heavy songs that got to the point to fill in the space of my other material,” Pittman noted.

The song “Evidence,” which is a single off the album Between the Spaces, was released last month. It’s a powerful song with fierce guitar rifts. The music created by Monte Pittman is the perfect fit for Metal Blade Records.

“It’s great having a group of people that are your friends and also you can trust their input. Metal Blade has survived many storms out there. Brian Slagel is responsible for a majority of the music I grew up listening to. He has a gift for knowing what people will want to hear and what they will like,” Pittman replied.

Monte Pittman also dropped a single called “Depth Perception” off the acoustic album Better or Worse last month. It’s a high tempo tune with an enticing tone and it is tightly put together with a clever bridge towards the end of the song.

According to Monte Pittman, the creative process for writing heavy songs and acoustic songs is essentially the same.

“It’s usually the same. Sometimes I will write a heavy song on an acoustic. That’s how I wrote “A Dark Horse.” Usually, when I pick up my guitar, I’ll start playing a riff when I’m not thinking about it. If that stays in my head, I know I’m on to something. It usually comes to you when you least expect it, so I’ve learned to start videoing myself on my phone when I’m just playing in case I come up with something. Then I can see what I’m playing instead of just listening back,” Pittman pointed out.

Workhorse is a good adjective to describe Monte Pittman, as evidenced by all the work he put into creating his new solo albums. He did everything on these albums except for the mastering done by Alan Douches, and the artwork created by Aaron Lea.

“Alan did The Power Of Three album so to balance it out; I had him do it. Aaron Lea has been a friend of mine since we were kids. He made a flyer for me, and I was really happy with what he did. That led to us talking about him making the artwork for these albums. He also created a new logo for me. Aaron is an incredible artist, and I hope more people become familiar with his work as a result of this,” Pittman stated.

“That’s what I learned to play on (the Gibson Les Paul). Now I play various ESP guitars. When I first tried out an ESP a few years ago, it made feel how I felt when I first started playing. It made me a better guitar player because I never wanted to put it down,” Pittman said.

Monte Pittman first started playing guitar at 13 years old, by 14 he started his first band, and by 15 he became a guitar teacher. Growing up his influences included Ace Frehley and Steve Vai.

“I got my first guitar when I was 13. I started my first band with my friends at 14. I started teaching at 15 as an apprentice to my teacher. It all started with Kiss for me. My first influence was Ace Frehley. I started playing guitar at a perfect time where music was at a crossroads. The thrash bands were blowing up, Steve Vai was pushing the guitar past its boundaries, Pantera was about to come out with their first album on a label, and the Seattle bands were about to start taking over. I got to witness all sides of it,” Pittman reminisced.

“(With Madonna) We got along great from the first time we met. She has always been a very dedicated student. When we played Letterman, she had only been playing for about a month. Now I can look back at that being a moment where my life instantly changed forever,” Pittman recalled.

In the years that followed Monte Pittman played on three Madonna albums: American Life, Confessions on a Dance Floor, and Hard Candy. He also got credit as a composer, co-writing the song “Easy Ride”, the final track off the album American Life. He also appeared on several of Madonna’s live albums.

Over the past 18 years, Monte Pittman has toured across the globe with Madonna half a dozen times. He has also played The Grammy Awards, MTV Video Music Awards, and the Super Bowl Half Time Show with Madonna. The 2012 Super Bowl was an epic performance watched by over 110 million people, a record viewership at the time.

“A lot of these things go by so fast, you realize what it is when you look back in it. The Super Bowl is a great example. You have around 8 minutes to get everything set up. There’s someone who has a job for every moving part. It was amazing seeing all of that be put together,” Pittman disclosed.

Monte Pittman has learned a lot working alongside Madonna over the past two decades.

“She’s always been so cool and supportive. She expects the best out of you and pushes your boundaries. She pays attention to the fine details, and that’s something I’ve learned from her,” Pittman added.

In addition to being a soloist and playing guitar for Madonna, Monte Pittman has also played for Prong, Adam Lambert, Karmin, and he also did a tour with Ministry.

Playing with Madonna was a turning point in Monte Pittman’s career, but so was the 2007 release of the album Power of the Damager by Prong. He wrote 5 of the 13 songs on the album, along with performing bass and back up vocal duties.

“I love that album, and that was such a fun experience. That actually was a turning point because I played bass. While going through that process, it made me look at the guitar differently. I think it made me a better guitar player. It wasn’t connected to me working on my solo career, but I learned so many things from Tommy and working with Prong that has really helped me now. It was like going to school. Prong school,” Pittman mused with a smile.

What can fans expect from Monte Pittman’s upcoming tour which includes a gig October 21st at the Gramercy Theatre in New York City?

“They can expect my best material. This is an exciting time for me. It’s been tough choosing which songs to play. Now I’m at the point where you only get to play a couple of songs off each album. I’ll have an acoustic section in the set where I get to play something off Better Or Worse. It all fits together really well,” Pittman concluded.

Fans can pre-order both albums via Metal Blade now.