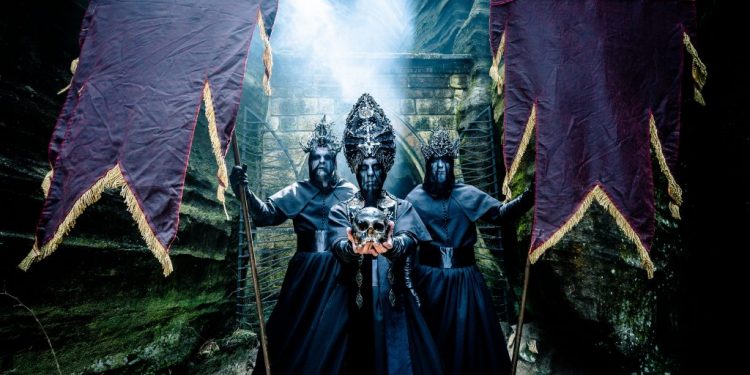 Montreal, Quebec – Polish metal band Behemoth are playing a concert in Montreal on November 4th, 2018. Recently, Behemoth released their studio album “I Loved You At Your Darkest” on Metal Blade Records. The title of the band’s album is inspired from a verse in the Bible. This may seem ironic when you consider their last album was called “The Satanist”.

“In the past, usually we’ve been choosing one strong word for an album title. It has always meant to be a statement, something powerful, and full of meaning. So there was Demigod, The Apostasy,  Evangelion, and then ‘The Satanist’ came into being. As we thought about it, this couldn’t go any further. We thought there was no way to top this word as the album title, so we made a turn sideways.  A verse from the bible as Behemoth’s album name – is already a twist. Grammatically, it’s a full sentence – it seems like a rare thing for an album title so we liked it even more. Plus, the meanings you can find behind this verse – they only make the entire thing more interesting. We enjoy making things seem uncomfortable or provocative. As long as it provokes or causes people to think – it’s all good. These words – are supposedly said by Jesus to a human. It’s a deep and beautiful sentence in the given circumstances,” Behemoth bassist Orion explained.

Orion explains the writing process for the new Behemoth album. When the band is in writing mode, the band is extremely focused; it’s like nothing else exists for them.

“Ideas for ILYAYD started to appear sometime in the middle of ‘The Satanist” cycle. This time, the album title was one of the very first things that came into being. Then the ideas for a very few particular riffs and motives. When we were slowing down with shows, we were speeding up with composing. Locking up in a rehearsal room for weeks between the tours, and then for longer, when we were done with the major touring part. After we had 6-7 songs pretty much ready, we’ve recorded a demo, at the same time testing Monochrom Studio for future drums recording. When we’re within this writing mode, it’s like nothing else really exists. We meet every day, same hours. Nergal brings some ideas, usually stripped down to a very few notes or one melody – and we work on them together. It’s all based on listening and imagining, we never even try to look at each others’ fretboards. It’s a very creative time and I enjoy it a lot. When working on basslines – I’m listening to the entire band. The song matters, not particular instruments. When we compose and arrange, it’s never really about showing off. Fewer notes are quite often better than too many. It’s all about finding the right exact spots to stand out and knowing where you should let others speak,” Orion replied.

Behemoth is pleased to be working with Metal Blade Records and with Nuclear Blast.

“It means to have good people working with you for your bands best interest. Some of these people are really close to us and some help us out a lot,” Orion disclosed.

On the Behemoth album, the band worked with Matt Hyde who did the mixing, and with Tom Baker who did the mastering. The band decided to produce the album themselves.

“Matt Hyde was a winning team member for ‘The Satanist”. We thought he did an amazing job for this previous album. We had a few other guys that we wanted to work with for the next album, but finally, after all, we decided to stay with Matt. He’s an amazing sound engineer and he understands us. Finding a proper language to speak about music and sound is not an easy thing. And technical language is not the right way to communicate. With Matt – there’s this common ground. And Tom Baker – his portfolio speaks for itself. He’s a top-class mastering engineer. This cooperation was quick and effective. He did one mastering version, we came back to him with one or two things we wanted to be different – and he returned with a version number two. This one stayed for the album,” Orion noted.

The first single off the new Behemoth album is titled “God = Dog”. Orion explains the inspiration of the song and the use of crucifixion imagery in the Behemoth music video.

“If you look into the lyrics for this song, you should notice a quote from Crowley. This leads straight to the literal inspirations for the song. The imagery we used for the video is a vision we had while we were taking photos with Sylwia Makris. Any inspiration comes from all sorts of things, it’s rarely a direct thing. It’s like a patchwork of life experiences. It’s books, films, art in general. I don’t really know if the imagery of crucifixion fits the genre of metal music. I couldn’t care less. It fits the idea for our album. If our thinking was ‘what would fit metal genre’ – we would probably end up with the horribly photoshopped skull on the front cover. We’re not good at fitting in, and hopefully, we’ll never be,” Orion elaborated.

“The “Messe Noire” DVD was released by the end of “The Satanist” period. We felt this album and this part of our history needs to go on video, as it all felt special. Back then we were playing the full album live, plus some extra songs in the second part of the set. It’s been too long since we released the previous live record, we also had numerous videos done for this album that we wanted to include in the release. “Messe Noire’ feels like summing up something truly important in our history. I even watched this thing recently with friends back again and I’m glad we did it. Also, I believe the next one we’ll do in the future will be even more interesting. But when would that be – at the moment I have no idea. There’re other things to accomplish for now,” Orion added.

Recently Behemoth toured with Slayer for the band’s final world tour. One of Orion’s fondest memories was sharing a birthday party with Kerry King.

“It was exactly what I expected it to be. An amazing tour with great big venues and thousands of people, awesome music that I love, being able to watch Slayer every night, socializing with legends from the posters hanging in my room back from when I was a kid. Pure greatness. I’ll remember it for a lifetime for sure. And the coolest thing, for me personally was to share a birthday party with Kerry King. What a night it was,” Orion recalled.

Metal fans in Montreal can expect an amazing concert on November 4th. Behemoth looks forward to returning to Canada for the concert.

“Canada has always been a good place for us to visit. Ever since we’ve done this crazy winter run with 24 shows in Canada – only it feels like we need to come back more often. We appreciate you all there. It will be a pleasure to conquer Montreal once more Behemoth,” Orion concluded.

Heavy Montreal, Greenland Production and Evenko present Behemoth along with At The Gates and Wolves in The Throne Room. Doors are at 6 pm, and the show starts at 7:30 pm. Tickets are on sale for $39.50. Fans can purchase tickets online.

TeacherCon to to bring coding lessons to Cornwall classrooms