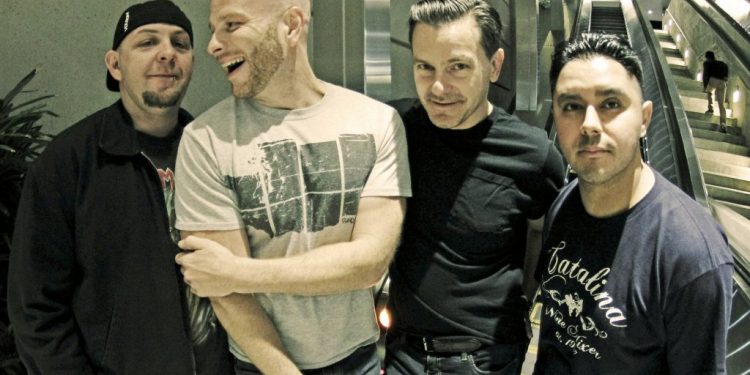 “For decades Ten Foot Pole has been an “underground” band, meaning that we never had any radio hits but we played thousands of shows around the world. Over those years we developed an extensive discography of favorites, non-favorites and hard to find music. In our recent tours, a common question among people that really enjoyed the show was which (old) record to buy. My response was typically something like “If you liked the song John, it’s on “Unleashed”. If you liked Kicked Out of Kindergarten, it’s on “Subliminable Messages”. If you liked Old Man, it’s on Rev, but you might notice it sounds different as we had a different singer then, though I was the songwriter, and he was a pro ball player.” So rather than head down that path, I wanted to have one collection that could represent the band, so that when we earned new fans on the road, we could let them take home great sounding recordings of our favorite songs. Then if they end up really liking the band, they can always go back and check out the old recordings and more obscure tunes,” Jagard said.

The two new songs off the album “Setlist” are a teaser for their upcoming record.

“We put two new songs on the record to show that we were still writing, and as a teaser for the upcoming record. Setlist was meant to kind of re-establish our identity, and musical history, right before we put out a whole album of new stuff. A couple of favorites from our new song collection at the time, Scars is kind of the heavier and screamier tune and I Don’t Want to Go seems a bit more melodic. We have been pleasantly surprised to find that Scars is a fan favorite at shows, and we usually play it last or nearly last as it takes its toll on my voice. I Don’t Want to Go has been a lot of fun because of audience participation screaming the backing vocal, which is my favorite part of shows -backing vocal sing alongs,” Jagard added.

Ten Foot Pole is working on a new album. One possible name for the record is “Don’t Be A Dick” – but that has yet to be confirmed. The new album will also be self-released, and Ten Foot Pole will be utilizing crowdfunding.

“The drums, rhythm guitars and lead vocals have been recorded, but we are taking a little break, waiting for our producer Ryan Greene to have a spare moment. We are considering calling it Don’t Be A Dick, after one of the catchy new tunes that audiences seem to enjoy singing along with, but that isn’t confirmed. To free us from dependency on struggling record labels, I’m paying for the recording myself, and set up a Patreon site, to see if the crowdfunded recording could allow us to keep making music. As I probably should not go deep into debt making records instead of sending my kids to college, I will wait to see how the Patreon subscriptions turn out to figure out the budgets of future projects. So far, several people have generously signed up to support the band, so I’m optimistic; we are super appreciative, and offer some tokens of gratitude, such as first access to the new songs. Also, I’m stoked that our Patrons receive our newsletters, so unlike on Facebook, I don’t have to spend money to send information such as tour dates to our whole list. Please check out the Patreon link from TenFootPole.com if you are interested in supporting our writing and our recordings, and if you would like to be among the first to hear the new music and want to receive newsletters and stuff,” Jagard answered.

This past summer Dennis Jagard hit the road with Chris Del Rio for an acoustic tour which included an Ottawa concert.

“The acoustic tour was great. I wasn’t sure how it would do and was open to lots of different types of situations, so we played at bars, houses, backyards, theaters, and festivals. My favorite was any venue where there were quiet listeners but happy backing vocal singers—and sometimes that was at houses, as well as the expected theatrical venues. We did play lots of new songs, surrounded by tons of old songs (most shows were around 2 hours long!), and it was very intimate and casual, as I opened the floor to questions. The tour didn’t impact which songs are on the new record since those are already half-recorded, but several brand new songs are on my favorites list for the next (probably acoustic) record,” Jagard revealed.

In addition to the acoustic tour, Dennis Jagard also hit the road this past summer as a sound engineer for Weird Al Yankovic. Both musicians have had interesting experiences with Prince. Prince once wanted to call Dennis Jagard “Denny Feedback”. Furthermore, Prince wasn’t a fan of Weird Al’s parodies.

“My discussions with Al so far have been very focused on the services I provide, we haven’t gotten chummy quite to the point where I am not embarrassed to tell him about my band, or to talk about Prince stories. He may be aware of my background both with the band and my past sound customers, but so far he hasn’t brought it up. A few of the musicians in Weird Al’s band have seen me singing around the hotels and venues. I try to be discrete, but when you live and travel with someone for months at a time, and sing every day for an hour loudly, it’s hard to keep a secret. A couple of the musicians have come out to the acoustic shows, and even offered to possibly play a solo or two on the new record, as I think it would be fun to have some guest solos—of course, they are incredibly talented to be able to play the Weird Al repertoire,” Jagard stated.

2018 is also the 20th anniversary of the Epitaph Records compilation Punk-O-Rama Vol.3. The song A.D.D. was a stand out on a great compilation CD.

“I’m grateful for the support we got from Epitaph that enabled us to get our music in front of so many punk music fans,” Jagard replied.

The song A.D.D. was inspired by a story Dennis Jagard heard from a teacher friend.

“A friend who had just started being a teacher told me about a situation at her school where literally half the kids in the class were medicated based on the recommendation or advice or diagnosis from the teacher. I realize there are some people that seem to benefit from meds, but I’m pretty sure the percentage of people is less than half of a random group of kids. Also, since I had a bit of a run-in with authority in school, see the autobiographical song Kicked Out of Kindergarten for details, I’m pretty sure if I had been in that teacher’s class I would have been targeted for diagnosis and treatment. I thought it was interesting to write the song from the perspective of a kid that just wants to fit in and be good and smart,” Jagard explained.

“Canada has always been a bit of a paradise for me—friendly and courteous people, lots of punk music fans, and a general feeling of safety and support. So I love going there and meeting people, playing shows, and testing out the roadside services plumbing,” Jagard said with a smile.

He also really appreciates the Ottawa fan base for all their support of Ten Foot Pole over the years.

“We really appreciate you! I’m super excited to play the old songs, and even more excited to know that we have a new strong record on the way! I’m grateful my audio career has built to a point where I could take a little break and revive the band a bit, to spend some time on stage in the spotlight, and sing my little songs, either in an acoustic environment or a full-rocking band version. We’re really looking forward to it,” Jagard concluded.

Doors for the concert at Mavericks this Sunday are at 7 pm. It’s all ages. Ticket are available online at Show Pass for $15.