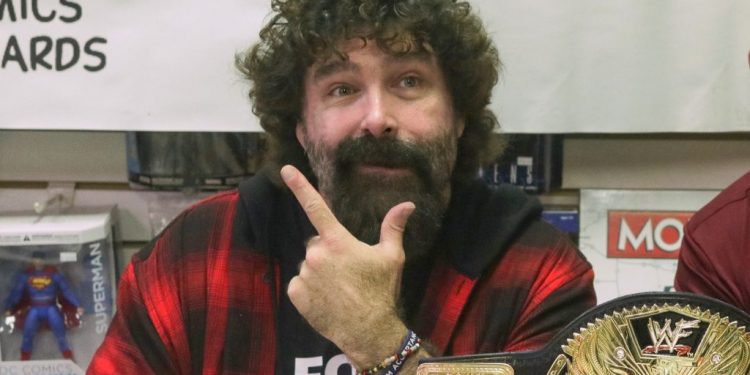 Cornwall, Ontario – On October 9th wrestling fans in Cornwall had a nice day meeting Mick Foley. Approximately 300 people were lined up along Pitt Street for the opportunity to meet the WWE Hall of Fame wrestler and New York Times best-selling author at Fantasy Realm.

Recently the WWE Network had a feature on the 20th anniversary of the Hell in the Cell match between the Undertaker and Mick Foley’s persona Mankind.

Next, the Undertaker chokeslammed Mick Foley on top of the roof of the cage and the chain-link mesh gave way, and he fell to the mat. Mick Foley was knocked unconscious from the blow. When he regained consciousness, he was smiling despite being bloodied up, having a dislocated jaw, and a tooth dangling beneath his nose.

It’s a match and imagery fans will never forget.

“It was special enough that I did an entire show on the Hell in the Cell match with the Undertaker for the 20th anniversary. I’m really glad that the WWE came out and saw the show and saw fit to record it for posterity,” Mick Foley reminisced.

Mick Foley is best known for his personas as Dude Love, Cactus Jack, and Mankind. His favourite persona was the second reiteration of Mankind.

During his time in the WWE Mick Foley was a three-time WWE Champion, an eight-time Tag Team Champion, and the first ever Hardcore Champion.

His first WWE Championship occurred on Monday Night RAW when he defeated The Rock in a no disqualification match.

Mankind was using his finishing move the mandible claw when Ken Shamrock belted him with a chair. Billy Gunn proceeded to tackle Ken Shamrock, and members of DX and the Corporate team battled outside the ring. It looked like the Rock was going to win.

Then one of the biggest pops in WWE history occurred. Fans erupted in cheers as they heard the sound of glass shattering on the PA system – the start of Stone Cold Steve Austin’s theme song. Stone Cold ran down to the ring, picked up the chair and knocked The Rock on his head. Mick Foley proceeded to pin The Rock for the three-count. After the match, Mick Foley dedicated the win to his children.

The match was a turning point for the WWE in the Monday night wars for ratings against WCW. WCW announcer Tony Schiavone tried to play spoiler announcing that Mick Foley was going to win later that night. This action backfired as over a half million fans changed the channel to see Mick Foley’s victory over the Rock. WCW never recovered from the ratings hit, and 22 months later WCW was sold to WWE.

Despite his championship wins and various accolades, such as co-headlining a Wrestlemania, Mick Foley says he never lead the company.

“I was filling in temporarily for the biggest stars. I never lead the company,” Mick Foley said humbly.

Mick Foley fans would disagree, they see him as one of the top stars of the Attitude Era.

Three of his eight tag team championship wins were with Dwayne Johnson. The Rock ‘n’ Sock Connection cut some of the best promos of that era. The chemistry between the two was entertaining, funny, and is still beloved by fans decades later.

“You already gave the answer. It was just chemistry with The Rock. It was two guys that played off each other well. It was a nice combination of completely different and opposite personalities,” Mick Foley replied.

Although retired from wrestling, Mick Foley still appears on WWE television. Until last year he was the GM of RAW working alongside Stephanie McMahon.

“I enjoyed my time working on RAW with Stephanie McMahon. I needed a hip replaced, and a knee replaced, so I couldn’t do it as long as I would have liked to, but I enjoyed being back there,” Mick Foley noted.

The last time Mick Foley wrestled in Cornwall was just after the Montreal Screwjob at the 1997 Survivor Series. Shawn Michaels was awarded the title in a controversial match against Bret Hart.

“I had walked out for a day, and I didn’t go to Ottawa after Survivor Series. It was a little bit contentious in the locker room. I guess Mr. McMahon did what he thought he had to do to keep the company alive and we moved on,” Mick Foley pointed out.

The last time Mick Foley was in Cornwall was for a spoken word event a few years ago.

Mick Foley enjoyed being back in Cornwall, meeting and interacting with the fans once again.

“I love doing the meet and greets. We had less than two weeks to promote the Cornwall event, and there is quite a lineup out there. It never ceases to amaze me that people still know who I am and will lineup to meet me,” Mick Foley concluded.

What’s next? UFC and WWE fans will be excited to learn that Ken Shamrock will be in Cornwall on Tuesday, October 30th, 2018 at Fantasy Realm. The event takes place from 6 pm to 8 pm at 227 Pitt Street. For more information visit the Facebook event.