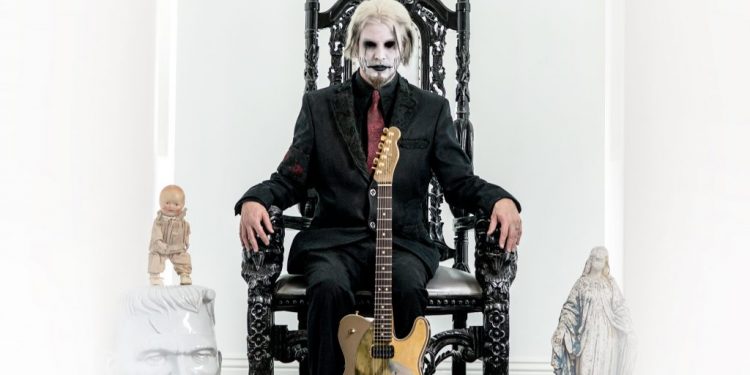 Ottawa, Ontario – John 5 and The Creatures are playing The Brass Monkey in Ottawa on Friday, March 22nd, 2019.

This is the first time John 5’s backing band The Creatures play in Canada.

“We’re so excited because we’ve never been to Canada with The Creatures. We’re beyond excited to come to Ottawa and rock. It’s going to be a huge show, a crazy rock and roll party! Guitars and monsters and all sorts of crazy stuff will happen. We’re really looking forward to it,” John 5 stated.

Their new album is called “Invasion,” and it comes out this July. To help promote the new album, John 5 has been releasing a new video and song each month.

“It comes out in July. I’ve been working on putting out videos for each song, releasing one song a month. I’m just doing my thing, getting people to check out the music, and check out the videos. It’s a new day selling records, and it’s been working well, releasing a new video online once a month,” John 5 added.

The animation for the video “Zoinks” pays homage to the cartoon Scooby Doo. It features the voice of Mötley Crüe bassists Nikki Sixx who plays a cameo role in the video as the villain.

“Being a fan of Scooby Doo as well, I loved it. I wanted to solve my own mystery and have a celebrity villain like in Scooby Doo. We had Nikki Sixx as our villain. We kept laughing so hard when he was doing that low voice. It was so funny, and we were laughing our asses off, and it was great,” John 5 reminisced.

The video also featured a voice actress who was on the Brady Bunch.

“Susan Olsen was one of the voices, and she was Cindy on the Brady Bunch. We had Fred Coury help me out with the score and some of the voices,” John 5 said.

Brett Boggs who was the animator for the video has an extensive portfolio and works for Disney. His work over the years includes Big Hero 6, Tangled, Christmas Carol, The SpongeBob SquarePants Movie, and more.

“The animator was Brett Boggs, and he is a genius animator. He’s brilliant, and he did all the animation. He works over at Disney and has worked on Frozen and Wreck-It Ralph,” John 5 noted.

“I love all the songs on the new album, like “Zoinks” which was the first video we did, and “Crank It” which was the second video, and the third one is called “I am John 5”. There are so many great tunes on this album. I’m super excited for this,” John 5 said with confidence.

John 5 is an impressive guitarist. When fans think of metal music, they might expect non-stop intense shredding, but John 5 comes up with impressive and creative melodic grooves.

“I like to change it up and make it interesting. I’ll start with a good groove or a good rift and change it up. It doesn’t have to be rock. If there is a good groove people can latch on to it,” John 5 explains.

The new album “Invasion” was produced and mixed by Barry Pointer.

“Barry was someone I met, and who had said check out this awesome studio. We went, and the engineer didn’t show up one day – something happened.  Barry said he’d run the ship and help till the engineer gets here. Barry was great. He’s nice and talented; I said dude, I want you to do my record. You’re amazing, you’re great! That’s what I did, we had him do the whole record, mix it and everything. He’s just a monster”, John 5 went on.

It was a similar story for John 5 back in the day. He went from being a hired gun to becoming the full-time guitarist of David Lee Roth in 1998. He attributes his success to persistence, professionalism, and word of mouth.

“I think it was just word of mouth, going from place to place. Also, who is reliable, and who is professional. They were calling on me, and I was super excited about it because everything worked out so well,” John 5 recounted.

“I learn something from every artist I work with. I listen to what they had to say. They know the answers, they’ve done this before,” John 5 observed.

John 5 is also interested in serial killers. On his album “The Devil Knows My Name,” his songs are named after famous murders.

“Yes, on the record “The Devil Knows My Name,” the song titles were based off serial killers. It was the theme of the record. The album did well. It’s so strange how these guys can murder people and not have any remorse or sorrow or anything like that. It’s crazy how that happens,” John 5 declared.

Marilyn Manson is also interested in serial killers. He named his bandmates after famous murders and famous stars, but he did something different for John when he joined the band.

“When I met Marilyn Manson, and he asked me to be in the band, he wanted to start doing everything with numbers. I thought that was interesting. Your name is going to be John 5 he said, and he gave me the name. He went that way with numbers which is cool, and I didn’t get a famous star / serial killer name. I’m glad I got the name I got because I’m still using it today,” John 5 confided.

It will be a reunion of sorts for John 5 when the Rob Zombie and Marilyn Manson “Hell Never Dies Tour” hits Ottawa on August 16th at the Canadian Tire Centre.

“We’re so psyched to be going back to Canada. We love it there. It’s a blast, it’s so much fun. It is like a reunion because we’re all friends, so we have a really good time. It’s summertime, we play crazy loud music. It’s a blast,” John 5 continued.

There will also be a new Rob Zombie album coming out later this year. The title of the album and the release date will be announced at a future date.

“We’ve been working on it for a little while. It’s all mixed, mastered, and finished. In my opinion, it’s Rob Zombie’s best record, and I know the records so well. I play them all the time and perform them all the time. I believe in my heart of hearts this record is his best one,” John 5 added.

Unlike their stadium concert in Ottawa this summer, the upcoming John 5 show at The Brass Monkey will be very intimate.

“I love it. I have a really good time getting up on these stages like the one at The Brass Monkey. The fans are right there. I love playing huge places too. It’s the best of both words experiencing both. I really enjoy being on stage and playing music,” John 5 divulged.

Jared James Nichols is opening for John 5 and The Creatures at The Brass Monkey in Ottawa on Friday, March 22nd, 2019.

“He’s so talented. It’s amazing blues power! He’s an amazing guitarist and singer. I’m so happy we got to have him on this tour. He’s on the whole tour, and we’re super psyched about it,” John 5 answered.

“I’m looking forward to playing Ottawa, and seeing you all there,” John 5 concluded.