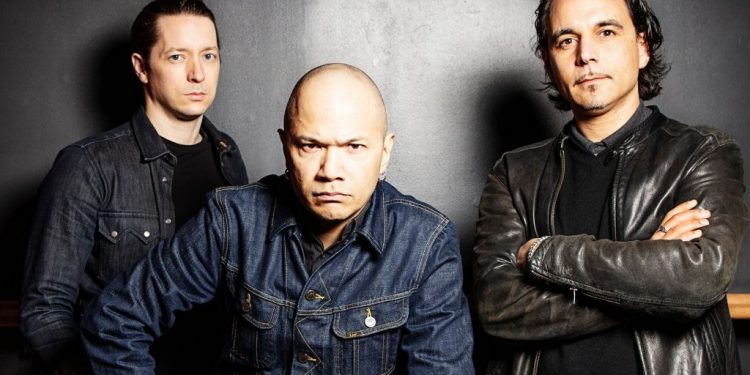 The upcoming tour is a promotion for their new and highly anticipated album called “A Rock Supreme” which comes out April 26th.

“The title of the album is a simple reference to “A Love Supreme” by John Coltrane,” Danko Jones explains.

The artwork for the album was done by Ulf Lundén.

“Ulf Lundén is an artist whose work we like a lot. He’s done the last few Graveyard covers. We always thought Graveyard covers were well done. All our previous albums have this one very powerful stoic image, whereas Ulf’s stuff is a collage. There is so much going on in the image,” said Danko Jones.

“We reached out to him, and he had this artwork for another project, but it never came to fruition. We liked it a lot, so he re-did it, and made it more centric to us. There are references to old albums, there is an SG guitar that I play, and more. We like it because it’s an album cover that you need to look at many to get every piece of detail,” Danko Jones went on.

Four singles have been released in advance of the album including the autobiographical and energetic song “I’m In A  Band”.

“We have four singles out, which is a new thing for us, we usually only have one before an album drops. We have four and have been releasing them since the fall. I’m told this is how people roll out albums these days due to internet and streaming. We put out a song in the fall called “We’re Crazy”, before the holidays we put out “Burn in Hell”, then we put out “Dance Dance Dance”, and a few weeks after that we released a lyrics video for the song “I’m In A Band”. I am in a band, getting on stage and playing shows, getting on the road to the next gig, so it’s autobiographical. There is no deeper meaning. We’re a hard rock band, we know our place, and this is what we do,” Danko Jones reminisced.

The music video for “Dance Dance Dance” was directed by Amir Chamdin, and the video was done in a single take.

“It was done in one take. Amir Chamdin is the director, and he’s a great director we’ve wanted to work with for quite a few years. Amir has done pretty much every video out there for The Hellacopters, and he’s also done videos for Björk. He’s out in Stockholm, and we’re in Toronto, and he did the video in Stockholm. The concept is pretty much what you see there: three dancers and one take. The song is about a girl dancing, so we have three girls dancing. That’s pretty much it, there is nothing deeper than that,” Danko Jones stated.

The new album “A Rock Supreme” was recorded by studio professional Garth Richardson at his very own Farm Studios in Vancouver, British Columbia. Richardson has an impressive music resume which includes recording for Rage Against The Machine, Red Hot Chili Peppers, Rise Against, and others.

“We usually do records in Toronto, except for one other record, we’ve done them all in Toronto, and we’re used to being home. Going to Vancouver for a little over a month that played into the recording, although I can’t pinpoint how. Just being away from home helps you focus as well. Garth comes with a ton of experience. He really picks up on tones, he was helpful when I was recording vocals. It was easy to record vocals with him, and guitar tones, and drum sounds. Of course, in pre-production with the songs and the arrangements, his ideas and suggestions were well noted. We took almost all the suggestions he threw at us. Him just bringing a wealth of experience to the table is what you get with Garth. With that experience comes the ability to sit-in with the band. He makes the working environment easier,” Danko Jones reflected.

In addition to music, Danko Jones also released a book last year titled “I’ve Got Something To Say”.

“The big thing I learned from the whole process is that the book world works a lot slower than the music world. Once I handed the book into Feral House it was almost a year and a half before it got released. In the music world, depending on what level you are, for example, a major label – there is a rollout that needs to be done or whether you’re some bedroom musician on Soundcloud, whatever the case, it’s a much shorter roll out time. With an album and the finished recording to the first person that hears it finished and mastered is only a few months. That was a big difference, I was so used to not having to wait too long. It tested my patience because I knew this thing was already in the bag, but we had to keep waiting,” Danko Jones noted.

From an artist who worked on American Splendor, to another who worked on Captain Canuck comics, to Danzig, several impressive artists provided illustrations for the book.

“It takes great patience to write a book, but the book I wrote is a compilation of articles I wrote for rock magazines over a period of 10 years. When I started writing my book, I combed through the articles I had written and picked the best ones and put it together. I got friends, and I got illustrators who I’m a fan of to illustrate stuff. Everyone from Damian Abraham of F-cked Up to Danzig to Richard Comely of Captain Canuck comics to Gary Dumm of American Splendor (and others) all contributed illustrations for my book. It was a collaborative effort,” Danko Jones stated.

“Duff McKagan, from the band Guns N Roses, wrote the forward to it,” Danko Jones added.

Danko Jones has had an impressive career. For example, he was nominated for four Juno Awards. Also, Danko Jones opened for Beck at Maple Leaf Gardens in 2000, and in 2002 they opened for The Rolling Stones for the “40 Licks” World Tour kick-off concert.

When did Danko Jones know he made it as a professional musician?

“The moment it happened is when we quit our day jobs and we just went on the road. It was around the spring of 2001. That didn’t happen until after the Beck show. That’s the moment you’re a musician when it’s what you do. That’s how I define it.  When we played with The Rolling Stones in 2002, we were a full-time band. The night before the Rolling Stones gig, we were in North Bay playing a show, we were on tour,” Danko Jones explained.

Now Danko Jones is on tour again. Fans in Kingston can expect to hear songs off the new album mixed in with hits and deep cuts from their 12 album discography.

“It’s going to be us playing our songs. Of course, we’ll be playing songs off the new album because it’s a promotional tour. It is what touring is all about. We’re promoting the new record. Of course, we’ll be playing songs fans know (and became a fan of our music listening to) in our discography. It’s a tight rope to walk with 9 studio albums and 3 compilation records of our songs, we have 12 albums to choose from. There is only so much time. We can’t do 4-hour shows. We pick and choose, and try to do new songs to remind people of the new album, old songs that fans know, and some deep cuts for people who might have seen us more than 2 or 3 times, and songs that will entertain yourself because you’re the one playing them. Playing the same songs night after night gets monotonous. There is a mish-mash of everything,” Danko Jones concluded.

For more info on the Kingston concert on May 10th, check out the event page.