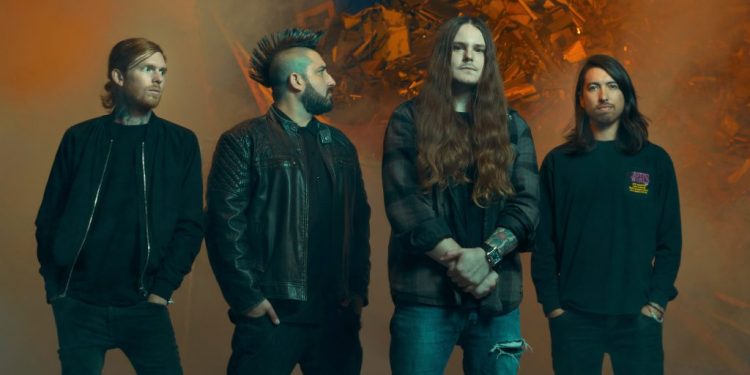 Ottawa, Ontario – California metalcore band Of Mice & Men are touring with Beartooth, and both bands are playing The Bronson Centre Theatre in Ottawa on April 16th.

Of Mice & Men have enjoyed numerous accolades as a band since forming in 2009. For example, Of Mice & Men have reached the top of the Billboard charts, they also had over 150 million streams on Spotify and over 20 million views on Youtube. Of Mice & Men have toured around the world and have shared the stage with bands like Metallica, Linkin Park, and Queens of the Stone Age.

This past autumn Of Mice & Men were in the studio recording new material with renowned music producer Josh Wilbur. Last month fans got to hear a new single called “How To Survive”. The new song is much heavier than the recordings from their previous album titled Defy. “How To Survive” has already been played over 1 million times on YouTube!

“After touring on Defy we wanted to go for a heavier sound. Yes, it was intentional. We looked at our upcoming tours in 2019, and this is the sound we wanted. We worked with producer Josh Wilbur who has worked on a ton of incredible metal albums. He has an incredible resume and he’s worked with bands like Lamb of God and Trivium. It was cool to work with him because we got somebody who knows when a rift is sick and when a rift is wack. We completed the new material and have something that everyone is really proud of and we dived into a new level of heavy. People will be able to hear that coming soon. The song “How To Survive” is the start, just wait,” said Of Mice & Men drummer Valentino Arteaga (also known as Tino).

Sonically, the new songs composed by Of Mice & Men will fit nicely when played on their upcoming tour with Beartooth.

“We’ve been friends with Caleb (Shomo) for many moons. We’re really excited to go on tour with them. We made a ton of new and heavy music. For me, Of Mice & Men will always be the metalcore band from Southern California. We don’t fight the term, but we love playing all kinds of music. At the same time, we love metal, and we love what we get to do. Having a heavier live sound is exciting for us, and we can’t wait to get on the road and do it live. We already have been playing “How to Survive” during a sold-out tour. We played that song every night. It was one of the most hyped songs in the entire set. We’re on our sixth album. The fact that our audience and our fans are being that excited and streaming it heavily, and consuming it and loving it, it’s incredible. It’s hugely invigorating and exciting for us to be at this point of our career and still be making music that resonates with our audience, and they love it, and they engage in it, and they take it and make it their own,” Tino disclosed.

“For us, the success comes from being able to make a living by playing music and having fun doing it. Then sharing that around the world, and going on tour, and seeing the world and performing our art for the world. To know that we have that many people listening to us is hugely encouraging. What people don’t realize is that we as musicians will do this forever. We don’t care as musicians if one album is more popular than the other. People, and magazines, and webzines talk about that. Do you know what musicians talk about? The next song that they’re writing. Once a song is out, we’re talking about the next song. It’s a constant theme of creativity. We put albums out to the world and it’s interpreted the way the world wants to interpret it. We already created it, it’s our piece of work we’re sharing with the world. If it resonates, it does, and if it doesn’t, it didn’t. I think we try to make the most honest music possible. I think that’s why it resonates with so many people. Our fans come out to the shows and love the new music, and they love the old music too. We had a Twitter vote, and they voted for the first song off our second record called “O.G. Loko”. The song is 9 years old, but we threw it in our setlist because the fans voted for it on Twitter. We love engaging our audience, engaging our fans, and having them be a part of the experience. We wouldn’t be here without them, so it’s important to include them however we can. It’s our lives, it’s our community we grew up in. They need it, and we need it,” Tino added.

The lyrics of “How To Survive”, written by Of Mice & Men frontman Aaron Pauley explores the themes of isolationism and surviving while being an outsider. The lyrics resonate closely with Tino and the other members of the band.

“We can relate to it right now. When we write music a lot of it is reflective and introspective to ourselves. At any point in life, you can feel marginalized. You can be headlining arenas around the world or touring festivals, and still, feel like there are people against you. Or there are problems in your life that are out of your control. That’s relative to anybody’s life, and we all feel that way at some point. It’s a battle cry not only to ourselves but to our audience that we know what that’s like and feel that. It’s a real feeling. You can come out on top, you can overcome those feelings, and overcome that isolation and marginalization that other people put on you. It starts with you. You push your own boundaries and create the reality around you. If people are going to judge you, you have to find a way to let it not affect you as much as it would normally. With our music, we write it about ourselves, and how we feel. When we put out to the world, we realize it’s not just us, we find out everyone feels this way at one point. Everyone needs that kick to the next level to realize what’s important or what needs to be done,” Tino stated.

Tino has been a musician since he was just four years old, and he picked up his first drumkit at the age of 15. It was a decision that would change the course of his life. It would eventually lead to him drumming for Of Mice & Men.

“I’ve always played music. The first instrument I learned was the violin and I was four. I went from violin to piano, then from piano to guitar, then I learned saxophone and flute. It wasn’t until I started a punk band in my parents living room when I was a teenager that I got a drumkit. The drummer didn’t have a drumkit. I really wanted to have band practice at my house. I was playing guitar at the time, but saved up my money and bought a Pearl Export kit off Craiglist for our drummer, so he could play drums at my house, and if we had a show he could play the drums because he didn’t have a drumkit. Our band broke up, and I had a drumkit at my house, and I thought I should learn how to play it. I was 15 at the time, and I’ve been playing drums for over half my life now. It’s funny how that all came about. The drums are fun, and they’re therapeutic too. I’m definitely not an angry person, but music, and metal, and the dark side of music has always spoken to myself and my drumming. Being able to create that music, but know it’s not only therapy for myself but for our audience and listeners, it’s really cool. The drummer is the only one in the band doing the very primal rhythm and drums. It’s a primal thing that dates back to before civilization. Now I’m playing the best drums on the planet,” Tino recollected.

Of Mice & Men released their debut album on Rise Records in 2010, and they are still on the same label today.

“I went to high school with the vice-president of Rise Records Sean (Heydorn). We were in the music industry together since high school – plotting, and scheming, and dreaming. We’ve been lucky enough to put out five albums, a live album, and a DVD. They are a second family to us, they’ve always taken care of us. When other people complain about their record labels we don’t share the same complaints. We’re fortunate enough to have a great working relationship with them. For us, working with Rise has been awesome. They trust us, they see our dream, and they let us achieve that. We’re stoked with the new material coming out. They were hugely helpful in getting everything together, putting us in the studio, and allowing us to create some of the best music Of Mice & Men has ever created. We’re really excited for that, and thankfully Rise has always been in our corner,” Tino noted.

This year was a first for Tino when he was invited to the Grammy Party. Although Of Mice & Men were not nominated for a Grammy, it was an incredible experience for Tito nonetheless.

Tito and the rest of the band Of Mice & Men are looking forward to returning to the nation’s capital.

Spectrasonic presents Beartooth: The Disease Tour Canada with Of Mice & Men, Hands Like Houses, and Like Pacific on Tuesday, April 16, 2019, at the Bronson Centre Theatre. Doors open at 6:00 pm and the concert starts at 6:30 pm. Tickets range from $35 to $39.50 and can be purchased online via Ticketfly. The Bronson Centre Theatre is located at 211 Bronson Avenue in Ottawa, Ontario.