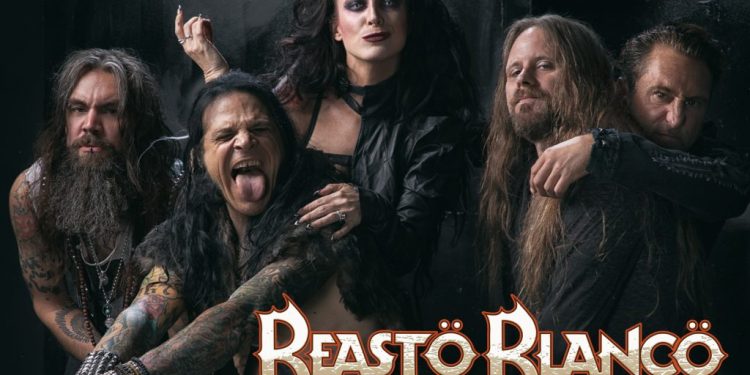 Beasto Blanco also has a new album coming out titled “We Are.” It’s the band’s third studio album, and it’s to be released via Rat Pak Records on May 24th.

The title of the album “We Are” encompasses the idea that everyone involved with the band, from fans to management, are all a part of the band and experience. Therefore, “We Are” Beasto Blanco.

“When you have a band, and you’re creating music, and put so much effort into writing and recording songs, building the show, and touring, you do it for the fans. Over the years we’ve accumulated this wild pact. They are diehards, and they are considered our loyal beasts, and we couldn’t do any of it without them. It’s the fans that push us to be better. From management to lyrics, to merchandise, everybody starts coming on board and is very passionate about the band Beasto Blanco. This is our way of saying “We Are” Beasto Blanco, and when you say it, you say it like you’re talking about yourself, so everybody is Beasto Blanco who’s been involved with this thing, and even those learning about it now,” Chuck Garric stated.

The album “We Are” was produced by Ryan Greene. He’s an A-list producer who has worked with many great talents including Alice Cooper.

“Ryan Greene has been instrumental in making this last record. He did produce our second record, the self-titled Beasto Blanco record, but on this record, we handed over the full creativity and reigns to Ryan Greene to make sure he was getting out of us what he thought we were capable of doing. I presented Ryan with about 17 songs; he picked the songs he thought we should record. I gave him the freedom to dissect them, manipulate them, change them, and re-arrange them. He did do that and made all of us push harder to sing differently or try different things. He brought out the best in each of us, and it gave us the courage to go for it and try, and it made us better musicians, and it made for a cool experience. It’s something I always wanted to have a music producer do – to take control and let me be the artist and him be the producer. We agreed upon most of the changes,” Chuck Garric explained.

Chuck Garric has been a bassist with Alice Cooper since 2002 and loves working with the music legend. However, Beasto Blanco is an opportunity for Chuck Garric to be a songwriter, and to take ownership of songs that are his own.

“Absolutely, there is that desire. I’ve been a bass player in some of the best bands in the world. I still play with a legend, and it’s an honour, and I’ve learned so much, and I am still learning. I’m also a songwriter and creator. I have my own vision and Beasto Blanco has given me that freedom to express myself and let Calico and I act out the things we’ve wanted to do for so many years. It’s given us the freedom to express ourselves without answering to anybody. This is our thing, and it’s done our way, and we love it,” Chuck Garric said.

Calico Cooper became known for his stage performance theatrics with Alice Cooper with the character of the sadistic nurse. Now, Calico is making a name for herself and breaking away from her father’s shadow. This idea is expressed in the lyrics to “Perception of Me.”

The gifted singer has found an outlet to express herself, not just as a vocalist, but as a producer. She wrote, directed, and produced her first ever music video for the song “The Seeker.” In the music video, there is a woman in a gown, running barefoot in the desert, seeking refuge in a church from would-be assailants.

“Imagery wise I got the idea for the video while driving through the desert from Phoenix to L.A. I kept listening to the song knowing we were going to do a video, and for some reason, I kept imagining this woman just running barefoot in this nightgown in the desert – almost like a mirage. Next, I asked myself why is she running, and who is she running from? I created this old western scenario where this woman had just run out of a town where she had been attacked. She’s running for safety to the nearest church to hide in there. I thought of the imagery of her seeking refuge, and when she’s cornered, she’s not afraid anymore. She walks up to the biggest one of them, looks him in the eyes, and says do your worst. You can break my body, but you can’t break my spirit,” Calico Cooper explained.

Both Calico Cooper and Chuck Garric have excellent chemistry together. The vocal interplay between the two is outstanding.

“We’ve worked together on multiple levels. We met with Alice Cooper’s band and developed a professional relationship. When you know what someone’s capable of, you can push each other. When we sing, I’m singing at him, and he’s singing at me. There’s a banter there and when playing live it’s another beast. On the record, I love the way our voices sound together. It’s like the Natural Born Killers; I love it. We play off each other. If he does something on stage that’s different than the night before, that’s okay. It’s not a choreographed show. I feed off the energy. He’s angry or being ridiculous and goofy; it’s going to change the show because it’s real. I think fans have a sense that it’s not staged, but that it’s real. Real interactions, real emotions, just real,” Calico Cooper went on.

“I think sonically, it’s great for the listener. For me, I’ve always loved bands that each song has something different than the other. I love the dynamic of our two voices in one song. I think two different stories can be told here. The two different perspectives that mean the same thing. Everyone wants to get from point A to point B, but it doesn’t mean you have to take the same path. We can each have a different experience getting there. That’s the idea, that there is so much for you to hear when listening to the record or listening and watching us play live, there is so much there for your senses,” Chuck Garric added.

In addition to excellent vocals, the guitar work is incredible too. For instance, the song “We Got This” has powerful rifts. Garric explains the songwriting process for that song.

“Like anything, we have a demo version. Songs like “We Got This”, there’s me on guitar coming up with the structure of the song. It gives Ryan and Chris an idea of the arrangement or an idea of what the verse or chorus sounds like. “We Got This” is a great example, because if you were to play the demo version that I sent Ryan and Chris, and then you hear the version they created – it’s two completely different animals. I was shocked because that guitar rift I came up with, a monster rift, they took it to another level. They challenged my playing, they challenged myself, and they did that on every song. What we tend to do is get the main chords and structure down, and then Ryan and Chris would go at it and knock it out of the ballpark,” Chuck Garric stated.

On May 14th, Beasto Blanco is playing The Brass Monkey in Ottawa. It’s a more intimate venue, but fans can expect a stadium-quality show.

“I love playing small venues that are packed. You’re sweating; everyone’s sweating, the heat from the stage lights and the crowd, and there’s something organic and real about it, I love that. We’ve also played sold out stadiums in Germany, Switzerland, Austria, and now we’re playing bigger theatres here on tour, and we do some club shows. For us, we approach everything the same. It’s an arena-style show no matter where you’re at. It doesn’t matter if it’s a 100-seater or a 50,000-seater, we’re still going to give you the same show. Sometimes it goes off a lot better at smaller venues because they’re not expecting that kind of show,” Chuck Garric stated.

“When you come to a Beasto Blanco show, you are a part of that, “We Are” Beasto Blanco, and you’re a part of the show. It’s going to be an interactive experience. Come ready to party, because we’re coming loaded,” Calico Cooper added.

New fans who are seeing Beasto Blanco for the first time are in for a treat.

“Come with an open mind; I always like seeing something for the first time and experiencing it, and not having any expectations, and becoming involved in it. There is something miraculous about going into something and not sure what it is or if you’re going to like it. After a couple of songs, you realize, it’s amazing, and I’m going to become a part of this. One of the best compliments I ever received was from Lindsay years ago. It was at a club in Nashville when she said that I didn’t want to leave the spot I was standing in. I didn’t want to get a drink, I didn’t want to go to the bathroom. I didn’t want anybody to even talk to me. I wanted to be in this show, and I wanted to be present because if I turned around, I was going to miss something,” Chuck Garric concluded.

Don’t miss out on this amazing concert. Doors for the show on Tuesday, May 14th, 2019 are at 7 pm, and the event is 19+. Tickets are $17 and can be purchased online via TicketZone. Opening for Beasto Blanco is Feed After Midnite and Darren Michael Boyd.