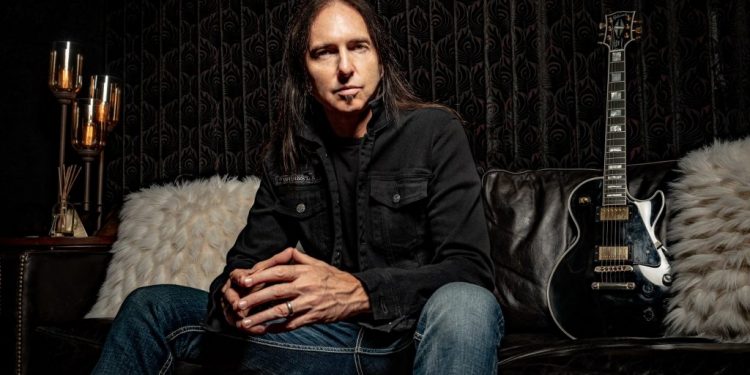 In addition to his solo career and playing guitar for Alice Cooper, Damon Johnson has also played with Brother Cane, Thin Lizzy, and Black Star Riders.

Damon Johnson’s new solo album “Memoirs of an Uprising” has received a warm and positive reception from music fans. On this album, Johnson has returned to lead vocals.

“It’s been great to feel the positive reaction from my fan base that I’ve decided to get back behind the lead vocal mic again,” Damon Johnson noted.

The new album is self-produced and was recorded during scheduled breaks of the Black Star Riders tour.

“I produced the album myself and recorded it over some breaks in my tour schedule with Black Star Riders in late 2017 and early 2018. Drums and bass were tracked at a friend’s studio here in Nashville, and all vocals and much of the guitars were recorded at my house. By the time I had decided to depart Black Star Riders and focus on my solo career full time, the album was ready to be mixed,” Damon Johnson explained.

“Memoirs of an Uprising” was self-released on Double Dragon Records.

“Double Dragon Records is my own label imprint, so I’m learning a great deal as I do all the heavy lifting of promoting and distributing the album myself,” Damon Johnson added.

A music video for the single “Shivering Shivering” delivers a minimalist approach allowing the music to speak for itself.

“There’s no doubt that I always want the music to speak for itself, and the video was also quite minimalist as I was spending my own money to film and edit it. A great young director in Nashville, Chris Hopkins, did a fantastic job on it,” Damon Johnson recalled.

The songs on the new album were co-written with Jim Troglen.

“As for the songwriting, there’s no specific approach or formula that I use. I co-wrote all these songs with my great friend Jim Troglen, and our years of experience writing separately and together kept us feeling fearless during the writing. Whether we start with a title or a story or a riff or a vocal melody,” Damon Johnson said.

Johnson is a talented guitarist. He mostly plays Gibson, Epiphone, and Les Paul guitars. His first real guitar was a Fender Jazzmaster.

“My first real guitar was a Fender Jazzmaster that my uncle gave me. The action on the neck was nice and low and that guitar always felt easy to play, which helped me greatly in those early days of learning songs with my friends from junior high school,” Damon Johnson reminisced.

“Most of my guitars are Gibson and Epiphone, and mostly Les Pauls. I’m also using my Gibson 335 and Korina Wood Explorer as well,” Damon Johnson added.

Damon Johnson’s big break came when he joined the band Brother Cane. Their song “And Fools Shine On” was featured in the horror film “Halloween: The Curse of Michael Myers”. It was a huge thrill for Johnson to hear their song used on the iconic horror film.

“That was a pretty big thrill to have our song in any film, especially a horror flick that so many of our friends and family were planning on seeing anyway. I did indeed see it in a theater in its first month of release, so my friends that I saw it with made a big deal out of it when the end credits started and “And Fools Shine On” comes blasting out of the speakers,” Damon Johnson recalled.

For five years Damon Johnson was the guitarist for Alice Cooper, touring and recording with the master performer. Johnson also shared songwriting credits with Alice Cooper on the song “Woman of Mass Distraction”.

“I’ve always said joining Alice’s band was like joining the circus. There’s no other gig like that on the planet. Alice is a master performer, so it grew my confidence as an entertainer standing next to him for those five years. And the entire process of making that ‘Dirty Diamonds’ album in 2005 was a mind blower for me. It was another career thrill to sit next to Alice with a pen and paper and watch him turn into Alice Cooper: legendary songwriter,” Damon Johnson replied.

While still guitaring for Alice Cooper, Damon Johnson got the call from Thin Lizzy guitarist Scott Gorham to work with them. Johnson, who was already a huge fan of Thin Lizzy, and he did a cover of the song “Borderline” on his debut solo album titled Dust, welcomed the opportunity.

“Obviously it’s a massive career highlight for me. The music of Thin Lizzy had already impacted my own career in a multitude of ways, so it was nothing I had ever even considered a possibility that I would be asked to play guitar with them. I still enjoy playing those songs to this day,” Damon Johnson disclosed.

Last year, while Damon Johnson was playing with Black Star Riders, the band was on tour with Judas Priest.

“Judas Priest are like family to me and to all in Black Star Riders, so we knew it would be a great hang to tour America with them. But I’ll always look back on that tour as being the time period that I decided to “go it alone” and chart my own course, which I’m very grateful for,” Damon Johnson responded.

Damon Johnson looks forward to his return to Canada. He recalls playing Canada with Brother Cane in the early 1990s, and again during his years with Alice Cooper.

“Canada has been good to me from the very first time I played there with Brother Cane back in the early ‘90s. And we would always do a string of dates across the country during my years with Alice Cooper as well. But it’s been quite some time since I’ve been there playing my own music, so I’m absolutely thrilled for the opportunity to perform for Canadians again. I’ve got a mountain of material to pull from, and fans can count on me performing music from my entire career in addition to some of my songs from Memoirs,” Damon Johnson concluded.

See Damon Johnson on Friday, June 21st at La Maison Tavern in Cornwall, Ontario. The show is 19+, doors are at 9 pm, and tickets are $20. Advanced tickets are available at the bar, Buds Records, Melody Music, and the Lotto Kiosk in the Cornwall Square Shopping Mall. For more information visit the Facebook event page.