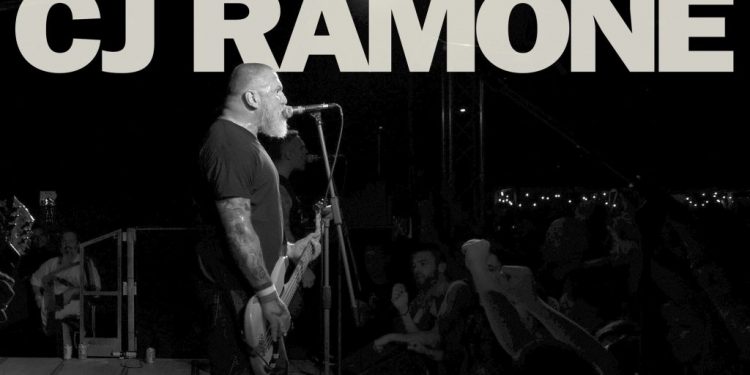 New York, New York – CJ Ramone has released his 4th studio album titled “The Holy Spell” on Fat Wreck Chords. The title of the new record describes his passion and his love of making music.

“I’m enjoying making and writing music now more than I ever did. It’s like everything else in life, the longer you do something the more you understand and relate to the finer points of it. There’s a depth to the songs on “The Holy Spell” that I did not have even on the last record. But at the same time, it’s a really fun record,” CJ Ramone elaborated.

“Dan Root is probably the best guitar player I’ve ever played with, plus he’s got a great voice, and he’s fun to watch live! Pete Sosa is hard hitting and plays like a veteran even though he’s a young man. He’s a rock solid drummer which makes my job easier. Nate Sander is so well steeped in music, and he can do just about anything. He’s my utility guy, playing everything from guitar, to trumpet, to the piano. He can sing with the best of them and his harmonies make me sound better than I am,” CJ Ramone replied.

“It’s definitely the best experience I’ve ever had. 21 days with only one weekend off. I slept in the control room, fully immersed in the making of music. Paul and I worked on “American Beauty” together and knew we had good chemistry. The only thing missing was our man Steve Soto. Paul and I have both worked with him for so long, that even though he wasn’t there physically, Steve’s on the record.

The song “Rock On” is a farewell tribute to Steve Soto of the Adolescents. Steve Soto worked toured and recorded with CJ Ramone, and more importantly, he was a close friend.

“My best memories of Steve are the laughs we had more than anything else. He was a really talented guy. Check out his last solo album “Songs about Girls and Earthquakes”. He did his best to help his friends any way he could. I’m glad we got to do records and tour together. I would’ve liked to have another 20 years playing with him,” CJ Ramone reminisced.

There are two covers on the new album: Dave Edmunds’ “Crawling from the Wreckage” and Webb Pierce’s “There Stands the Glass”. These songs are a throwback to the music CJ Ramone’s parents listened to when he was growing up.

“My mom and dad were both big country music fans so I grew up listening to a lot of country for a very long time. I moved away from it for a long time after I found heavy metal and punk rock but I always kind of circled back to it at some point. I picked the Webb Pierce song “There Stands the Glass” because it’s a classic drinking song and Webb Pierce sang some really great melodies. That song easily lent it’s self to the punk rock style and is probably the most ripping song on the record. “Crawling from the Wreckage” by Dave Edmunds (written by Graham Parker) is one I’ve always wanted to do. I dig the whole theme of the song: fast cars drinking and rock ‘n’ roll,” CJ Ramone explained.

“I got into heavy-metal before I got into anything else on my own. Black Sabbath was the first band I have a really got into on my own. When the British metal bands came out like Iron Maiden, Judas Priest and the rest, that became my world. The Scorpions from Germany too! Everything I listened to before that was my parent’s influence. I found punk rock through the Ramones! The Clash, The Damned, The Sex Pistols, Buzzcocks, Vibrators, followed soon after. Metal appealed to me because of the heavy, aggressiveness of it and the imagery that went along with the lyrics,” CJ Ramone elaborated.

“The Ramones had the heavy guitar sound and speed, with pop melodies and lyrics about being an outcast, love and horror films. Instantly, I identified with it,” CJ Ramone went on.

“I dig Starcrawler’s version, it has a haunting sound to it. Hearing it, I can’t help thinking about the first tour I did with the Ramones as it was for the “Brain Drain” record that this song was on. We played “Pet Sematary” every night and it was one of the highlights of the set,” CJ Ramone disclosed.

In addition to the remake of Pet Sematary, there was also a theatre play in Toronto based on the Ramones and their experience with Phil Spector titled “Four Chords and a Gun”.

“I heard about the play, but have not seen it. He was known to point guns at people. Not acceptable, but It was part of his larger than life personality. I don’t think Phil intentionally murdered Lana Clarkson. I’m not saying he didn’t shoot her, I just don’t believe he meant to pull the trigger. He pointed a gun at Johnny during the recording of End of the Century,” CJ Ramone said.

Over the decades the Ramones have become entrenched in pop culture, and CJ Ramone was immortalized on the iconic cartoon sitcom The Simpsons.

“It was one of the highlights of my career! I got to curse on primetime TV,” CJ Ramone noted.

In addition to the new album, CJ Ramone is still touring and playing shows. He will be playing the Joey Ramone Birthday Bash in New York City on May 19th.

“The Joey Ramone Birthday Bash is always fun. My best Joey memory is sitting in his apartment listening to music and talking. I appreciated his friendship and miss him every day,” CJ Ramone replied.

“I will be in Vancouver June 1st at the Wise Hall, with a few more dates later on this summer.

Reminiscent of the song “Touring” off the Ramones album “Mondo Bizarro”, CJ Ramone states it’s the best job in the world.

“It’s the best job in the world, and with the best fans in the world. The Ramones legacy gets passed from one generation to the next, and it’s an awesome thing to watch,” CJ Ramone concluded.