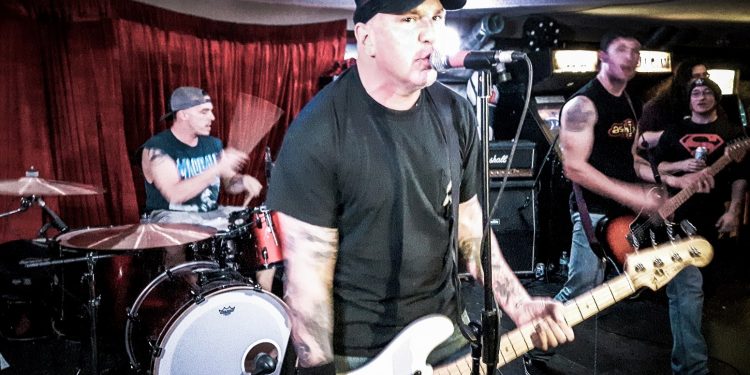 Montreal Quebec – There are over seven billion people on this planet, but only 7 were ever in the Ramones. In 1976 the Ramones took the world by storm with their blitzkrieg of punk rock music.

“American Beauty” was produced by Paul Miner, and was put together in 11 days.

“Paul Miner is a really great producer. He works so quickly and efficiently that the creative process navigates bogged down. We marched through the record in 11 days. Mostly because he kept everything rolling. A lot of things we used on the record were actually his ideas. I am probably going to hit him up for my next record for sure. The recording went so quickly there wasn’t time for anything but recording,” said CJ Ramone.

The title of the new album is “American Beauty”. What is the most beautiful thing about America? According to CJ Ramone it all boils down to unity.

“There are so many people from so many different places to build a country together without common backgrounds or even common language I think it’s pretty beautiful in itself,” CJ Ramone reflected.

This theme of unity despite differences sums up the Ramones beautifully. For example Johnny Ramone was a Republican, while Joey Ramone was a Democrat. Despite their differences they worked through it. What can we learn from this example, especially after a contentious American election?

“It’s about the common good. No matter which side you’re on you have to understand that we are always better off together. Winning is not what it’s all about, but finding a way to make it work for everyone is what our country was built on. Johnny and Joey understood that the Ramones were important to a lot of people and they did what was necessary to keep the band together,” said CJ Ramone.

Unfortunately several members of the Ramones have passed way over the years. The song “Three Angels” commemorates Joey, Marky, and Johnny.

Instead of re-naming the song “Four Angles” after Tommy passed away, CJ Ramone wrote a new song titled “Tommy’s Gone”, an acoustic track that will appear on “American Beauty”. It commemorates the original drummer of the band. CJ Ramone considers Tommy Ramone to be the architect of the Ramones and told him just that when the two were hanging out at CBGB’s in New York one day.

“I had a discussion with Tom at CBGB’s about his role in the band. I told him I knew he had been the architect and he asked me how I knew. I told him if you deconstruct the Ramones career and look for the place where they go off the rails, it was when he left the picture right after ‘Road to Ruin’. The next great album, I would call it a comeback album, was ‘Too Tough To Die’. The record where Tommy came back as producer,” CJ Ramone stated.

The song “Girlfriend In A Graveyard”, is another amazing song off the new album. Much like the Ramones song ‘Chainsaw Massacre’, it was inspired by an old horror film.

“It was inspired by one of the Hammer films. I was having a little bit of writers block so I put Dracula A.D. 1972 on. Caroline Munro is in that one as well as several others. She was the hottest vampire girl ever! Instant inspiration!,” said CJ Ramone with a chuckle.

“Yes I am a pretty big fan of Tom’s. In fact I had picked “I don’t wanna grow up” because I thought it fit three months perfectly. “Pony”, it’s probably my favorite Tom Waits song. In fact when we finished recording it I was not sure it was going to make the record. It sounded standard punk rock style to me and that was not good enough. It wasn’t until we added the mariachi horns to it that I felt it was good enough,” CJ Ramone responded.

The Ramones cover of “I Don’t Want to Grow Up” hit #30 on Billboard’s modern rock list, while their final studio album hit #148 on the American Billboard 200.

At the Ramones final show, released as the album “We’re Outta Here!” CJ Ramone had the opportunity to meet Eddie Vedder (Pearl Jam), Tim Armstrong (Rancid), Lemmy (Motorhead), and Chris Cornell (Soundgarden) – whom each joined the Ramones on stage to play with the band on various songs.

“I did that whole tour on a rigid Harley I’d built with a friend. There’s too many memories to pick a favorite, but I can say for sure playing onstage with them was one of the greatest experiences of my life,” said CJ Ramone.

“My favourite to sing was “Strength to Endure”. Mostly because Dee Dee wrote it, but also because I could relate to the lyrics,” CJ Ramone reminisced.

After the Ramones retirement they received recognition and accolades for their contributions to rock music. For example Spin Magazine ranked The Ramones as the second-greatest band of all time, second only to The Beatles. They were ranked #26 in Rolling Stone Magazine’s list of “100 Greatest Artist of All Time”, and they also ranked #17 on VH1’s list of “100 Greatest Artists of Hard Rock”. In 2011 the Ramones were awarded a Grammy Lifetime Achievement Award, and before that, in 2002 the Ramones were also inducted into the Rock and Roll Hall of Fame.

Although CJ Ramone himself was not inducted, Tommy Ramone, the original drummer, credited CJ with keeping the band young. CJ Ramone was not in attendance when the Ramones were inducted, but he was happy for his band mates.

“I was happy for the Ramones because it was important to them. It really did not mean much to me,” CJ Ramone disclosed.

One of the other surviving members of the Ramones is still playing and touring. Is there any possibility of CJ Ramone collaborating with drummer Marky Ramone in the future?

“No, I have three of my own records out now and have been working a long time to build a career on my songs. I’ve only got a few years left and I want to spend that time writing recording and playing what I write,” said CJ Ramone.

CJ Ramone is heading out on an extensive North American tour this spring which includes some Canadian dates including Toronto and Montreal. On May 13th he is playing The Legendary Horseshoe Tavern in Toronto, Ontario. The next night, on May 14th, CJ Ramone is playing Les Foufounes Electriques in Montreal, Quebec. Big Eyes are touring and opening for CJ Ramone and will be playing each of those concert dates.

This summer CJ Ramone is heading to Europe for another massive tour, and in the fall and winter he has plans to tour South America, and possibly Japan and Australia. For more information on the upcoming CJ Ramone concerts visit the Fat Wreck Chords website.