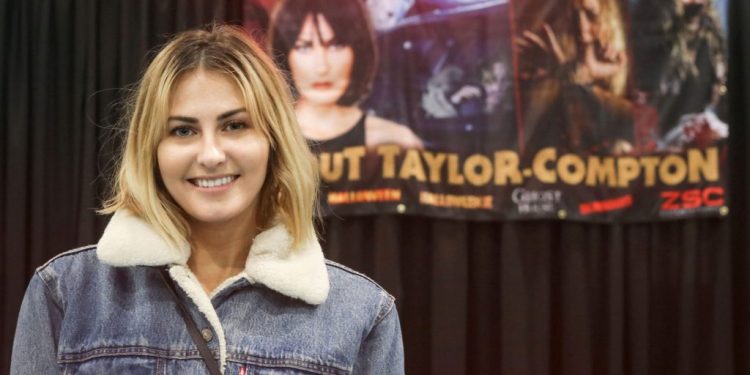 Cornwall, Ontario – Actress Scout Taylor-Compton, best known for her roles in Rob Zombie’s Halloween movies, The Sleepover, and Gilmore Girls, was one of the special celebrity guests at the 2019 Cornwall Area Pop Event.

At the age of 17, Scout Taylor-Compton was cast as Laurie Strode in the remake of John Carpenter’s Halloween directed by Rob Zombie. The role of Laurie Strode was first made famous by actress Jamie Lee Curtis who starred in the original movie series.

“I was 17 when I was cast. I think because I was so young it didn’t hit me that I was given such an iconic role for such an iconic franchise. I think that helped me in not comparing myself to Jamie Lee Curtis and make Laurie Strode as I saw her,” Scout Taylor-Compton disclosed.

Working on Halloween was an exciting experience for actress Scout Taylor-Compton.

“It was exciting working on Halloween, and I was really stoked about it. I also understood, as soon as my name was announced, the pressure of it. Thankfully I had an amazing director (Rob Zombie) who calmed me down at times and trusted me and what I had to bring to the role,” Scout Taylor-Compton added.

The Rob Zombie sequel titled Halloween II focused on the trauma faced by the character of Laurie Strode and hinted how she could be following in the same footsteps as Michael Myers.

“I think it shows everyone is different going through trauma. In the first one, Rob Zombie shows what a young Michael went through with a hell of a trauma with a crazy family. With Laurie Strode in the second movie, he played with the idea of what if they were the same person, what if she followed his footsteps. I thought it was an interesting route to take. I think it would have been really cool to have done the third one,” Scout Taylor-Compton disclosed.

“I was 15 when I did Sleepover. That whole set was so much fun. I think the mannequin scene was fun with Steve Carell, Alexa Vega, and Mika Boorem. We filmed in this mall, dressed up this mannequin, and hid from Steve Carell’s character which was a lot of fun. We also got to shoot in the Universal Studios backlot which I thought was the most amazing thing when I was that young,” Scout Taylor-Compton recollected.

On Gilmore Girls, Scout Taylor-Compton had a recurring role as Dean’s little sister Clara Forester. Were her friends jealous that she was on television with actor Jared Padalecki?

“My girlfriends didn’t really care that I was on TV or in scenes with Jared (Padalecki). I did have a crush on him when I was younger. I love being a part of iconic shows like Gilmore Girls and Charmed. Those are shows I’m going to show kids,” Scout Taylor-Compton replied.

Scout Taylor Compton has also appeared in several horror films and has earned the label of a scream queen.

“I love that title, and I think it’s cool. It’s rad that people like my scream. The first time I heard it, my scream, I was like this is a f-cking good scream. I liked it too,” Scout Taylor-Compton said with a laugh.

What’s next for Scout Taylor Compton?

“I have several movies in post-production that are about to come out this year, and I have a few movies on Netflix. I’m hopefully going to get a TV show I’m creating on the air, and I’m working on directing my first feature,” Scout Taylor-Compton noted.

Scout Taylor Compton enjoyed her time in Cornwall at CAPE.

“I love it at CAPE. I’m having so much fun. Everyone is so sweet. There are so many kids here, and I love kids. Seeing them all in costumes, and the parents letting the kids use their imaginations and creating all these really cool outfits are great. The guests are awesome. I grew up watching Degrassi, plus I love traveling with Lew. I’m having a great time,” Scout Taylor-Compton concluded.

It was announced that CAPE 2020 takes place April 25th and April 26th at the Benson Centre. Visit the CAPE website for more information.