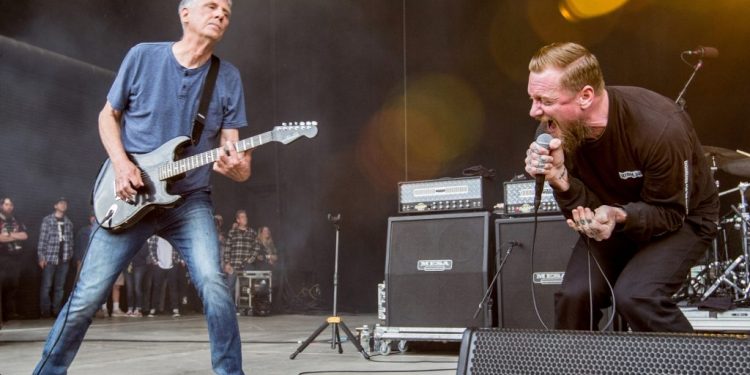 The show is just a one hour drive from Ottawa and a 90-minute drive from Montreal and Cornwall.

Mike Vallely is the lead singer of Black Flag. He has an intriguing background. He’s a professional skateboarder, who appeared on the cover of Thrasher magazine, and also appeared in various Tony Hawk video games. He’s also an actor, and his IMDb credits include The Hangover and Paul Blart: Mall Cop.

After a five year hiatus since Black Flag’s last show, Mike Vallely is excited to be on the road again for the upcoming world tour.

“It means a lot of fun. The time felt right for us to get back out there, and we look forward to sharing and experiencing this music with music lovers all over the world,” Mike Vallely said.

Mike Vallely explains that these songs are still relevant today, and even after 40 years, fans still connect with them.

“I look forward to playing all of them. The songs remain as vibrant and relatable as when they were written and recorded. These aren’t songs trapped in time but instead continue to live and have something to offer with every listen or performance,” Mike Vallely explained.

Mike Vallely became the lead singer of Black Flag a few weeks after the release of the 2013 album titled “What The…”.

The album “What The…” represented a new era of Black Flag music post-Henry Rollins. The artwork was considerably different too.

In retrospect, are there any regrets not going with Raymond Pettibon who designed their earlier album covers?

“I think that the work on “What The…” was set in motion with a lot of optimism by Greg, but it was unfortunately drowned by a lot of cynicism by his collaborator — it’s really too bad,” Mike Vallely stated.

There are no plans for a new Black Flag album – at least not yet.

“There are no talks or plans at this point for a new album. We have so much touring ahead of us, that is our focus right now,” Mike Vallely disclosed.

Black Flag guitarist Greg Ginn has received a lot of critical acclaims. For example, he was included in Rolling Stone magazine’s “The 100 Greatest Guitarists of All Time”. Also, many musicians include guitarists from Rise Against, The Melvins, and Alice in Chains all state that Greg Ginn was an influence.

Members of Black Flag are happy to be returning to Canada; however, the Montebello Rock show is their only Canadian date in 2019.

“We are happy to be returning to Canada and to be playing Montebello Rock, and yes, we would love to get back in 2020 for club dates, but we don’t have any immediate plans for that just yet,” Mike Vallely replied.

Black Flag played Montebello Rockfest in 2014, and they look forward to playing Montebello once again this year.

“We played Rockfest in 2014. We’d like to say to everyone coming out to Montebello Rock that we look forward to playing and to saying hello to everyone. It will be a fun night and show. Thanks for your support,” Mike Vallely concluded.

Tickets for the event are on sale now. To buy tickets, or for more information about Montebello Rock, visit their website.

Signs You Need To Visit An Eye Doctor