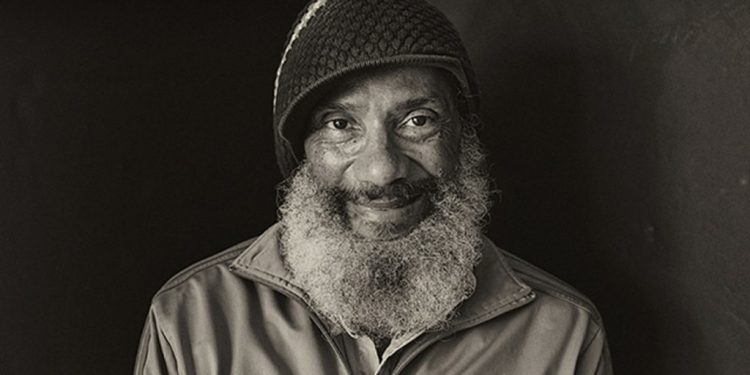 Article by Jason Setnyk | Photo by Jack Grisham of TSOL

Philadelphia, Pennsylvania – Vocalist Paul “HR” Hudson, who was the frontman of iconic punk band the Bad Brains, is releasing a new solo album called “Give Thanks”. The new album comes out October 18th on Hardline Entertainment.

The title of the album is an expression of gratitude.

“What I’m thankful for is when all the people coming together, and I am doing it through my music,” says HR.

HR will be backed by members of the Philadelphia reggae group Kingsound Vibration.

“We were first introduced to brother Stephen in Philadelphia, and we laid down the tracks and main vocals and bass. Josh Freshy did the bass, Ezekiel Zagar did guitar, and Adam Williams did the drums,” HR explained.

“It doesn’t matter how long it takes, eventually these songs will come into reality. After we laid down those tracks, it was hot, it was beautiful. Stephen was the first to do engineering on it. Then we sent it out to California, and Mr. Webb did some production work on it,” HR went on.

There is no official word yet what the first single will be, but fans await in eager anticipation.

Hardline Entertainment, who is releasing the new solo album by HR of the Bad Brains, has also released albums by Pennywise, Strung Out, T.S.O.L, Death by Stereo, Authority Zero, and others.

According to HR, Hardline Entertainment gives a musician such as himself the artistic freedom he needs to express himself without interference.

“It’s been fun, they’ve been so nice to us. They show acceptance of our new music, and they have not been trying to interfere with or change our sound. They got us a nice photographer, who took nice pictures, by the name of Jack Grisham,” HR replied.

The album “Give Thanks” is available for pre-order in opaque black, red, green, and gold vinyl. There is a limit of 100 copies being pressed in each color, and each record will be hand-signed and numbered by HR. The colors red, green, and gold are associated with reggae music and the Rastafarian movement.

The color vinyl variations are reminiscent of the Bad Brains debut album infamously called “The Yellow Tape” because of its packaging. The self titled album had many fan-favorite songs like “Sailin’ On” and “Banned in D.C.”. It was available in gold, red, and green cassette shells.

“I think that is cool, having different color vinyl. When we released our first (Bad Brains) cassette back in 1982, we had some gold cassettes, and later some red cassettes, and some green cassettes. The kids really loved that, and they became collector’s items.

This year is the 40th anniversary of the Bad Brains, who formed in 1979 and quickly became one most influential bands in American punk history. The Bad Brains last show was in 2017 when they reunited to play Riot Fest in Chicago.

Also, a movie and accompanying book came out in 2016 titled “Finding Joseph I: The HR From Bad Brains Documentary”.

The movie looks at the history of the Bad Brains and focuses on the life of HR, including his PMA (positive mental attitude) philosophy. The origins of his PMA philosophy can be attributed to a book his father recommended that he read when he was younger.

“There was a book that came out called “Think and Grow Rich” by Napoleon Hill, and my father said to me one day, that I should check out the book and do some reading. It would help me understand and be more focused about what I’m doing, so I did read the book, and it was excellent,” HR responded.

The documentary also featured various interviews including Ian MacKaye who cited the Bad Brains as an influence on his earlier work.

“He was in the Teen Idles before, he changed so much since he was a youngster. After there was Minor Threat, and after that Fugazi,” HR reminisced.

In 2017, HR had brain surgery to help with a neurological condition called SUNCT that was causing him severe headaches. The surgery was a success, and HR attributes his positive attitude in helping him get through the ordeal.

“I’m feeling so much better now, and thank god for it too. I had a lot of faith in the operation, and I was praying to God that it would help. Those headaches were unbearable. I went to Jefferson Hospital. It only took a few days, it was minor surgery. It did help, and I was able to do the things that I wanted to do,” HR disclosed.

In addition to being a musician, HR has also worked closely with his wife Lori on a series of paintings she did for an art exhibit.

“She put down some excellent artwork, poetry, and pictures, that came out of my lyrics in the band. That inspired her, and she did a beautiful job,” HR beamed.

In addition to the new album “Give Thanks”, HR will be touring the United States and later the United Kingdom.

“We’re going to start with playing shows in the mid-west. We’ll be playing reggae music, which is a lot different than what I was doing prior to that. I’m so happy the youth understand, and I’m going to be performing for them with no negative vibes, just PMA vibes,” HR said.

On July 23rd, HR will be in New York playing an acoustic show and doing a book signing for the paperback edition of “Find Josephy I: An Oral History of H.R. from Bad Brains”. New York is a city near and dear to HR’s heart. He released two live albums at CBGB’s in New York – one was a solo album and the other with the Bad Brains.

“Yes, I do have fond memories of playing there (at CBGB’s). We had guitarist David Jordan, and David Byers, and they were blistering out the tunes with energy,” HR noted.

His final word to fans is as follows.

“Remember to keep the faith, help the underprivileged, and be a little nicer to them. You never know who you’ll meet, or what talents they have. Always help,” HR concluded.

I’ll give thanks for that!

Pre-order the new HR album “Give Thanks” here.