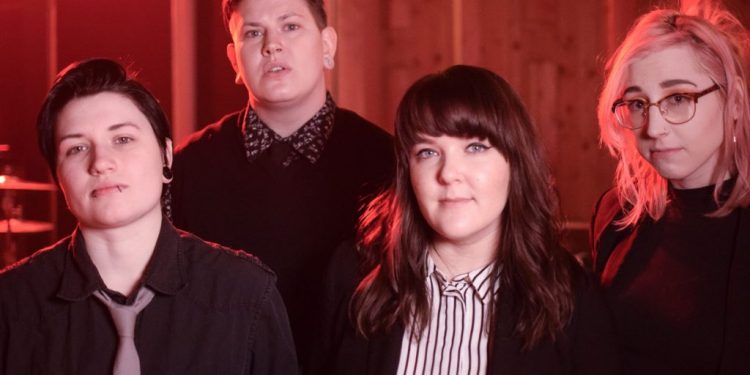 Strange Breed consists of Terra Chaplin, Megan Bell, Nicolle Dupas, and Ally Von Wallis. The foursome is touring across Canada in support of their debut studio album titled Permanence which was recorded at Hipposonic and Fader Master Studios in British Columbia.

“It was a surreal dream come true. Like when you see movies about bands “making it” and they walk into the studio of their dreams, it was like that, without us having to have “made it.” We had heard stories of the legendary Bob Rock working out of there and saw the shower where Steven Tyler would revise lyrics, and pictures of Bon Jovi in the rec room. It really felt like a chamber of Rock and Roll history. Even while we were there we met Vancouver heavy hitters like Mother Mother, Said the Whale, and Peach Pit. We felt a bit out of place at times, as this is our first album, but we are so grateful to have worked there that to have gained that experience and connections to such wonderful people,” replied drummer Megan Bell.

Lyrically the band addresses political and social issues in their songs pushing for positive change. This, in turn, creates safe spaces at their shows where otherwise marginalized groups can communicate and express themselves with like-minded people.

“I don’t think it was a choice really. As a band of 4 queer women, we were/are so frustrated with the social climate of today. We all felt a need to use the platform of music to continue conversations about consent, or queer lust, or misogyny et cetera. We also found that by writing about these “loaded” topics it would act as a tool to help attract like-minded people to our shows who would aid in creating safe spaces and act as allies to marginalized groups with us, as well as silencing the people who talk the loudest with hateful and belittling speech. We want to continue to #MeToo conversation and the #BlackLivesMatter conversation and remind the general public that our struggles will not be silenced or minimized. We will forever act as a voice for those who feel like their story doesn’t matter. We see you, we love you,” Bell said.

Earlier this year, Strange Breed released a music video for their single “Closer”.

“The song “Closer” is about the inner turmoil of queer lust and desire, so we really wanted to feature a group of queer female artists who could visually articulate our message. We reached out to our first fan and dear friend Morgan, who is also a strong member of the burlesque community. Morgan mastered all of the choreography, which sincerely reflects a parallel to our story.
Our director, Lindsey Hitchock, and her team took care of making us look like rock stars with the walls of Hipposonic Studios as the set. We are beyond pleased with how the video turned out,” Bell stated.

The formation of Strange Breed took time, but it was well worth it.

“Lead singer Nicolle Dupas has always been a songwriter/musician dating back to childhood. About 3 years ago she developed a drive that generic “dude bands” or “male-fronted” bands just couldn’t foster, leaving Nicolle to feel ignored and frustrated. Out of frustration, she put a very deliberate add on Craigslist looking for strong-headed female or queer musicians in efforts to start a band. After a couple of months of no response, our new lead guitar player Terra Chaplin responded showing her interest. Nicolle and Terra got together, and it ended up being a successful jam. Terra helped Nicolle finish a song that she had been sitting on for a few years, and they both left the jam feeling connected and inspired,” Bell recalled.

“After a month or so they expressed a readiness to play with a drummer. I had played drums for about 8 years in my teen years and casually offered to temporarily step in so as not to impose on my partner (at that time of 2 years’) project. Again as the story repeats, after a couple of groovy jams, I was welcomed into the band. Ally was brought into the band after Nicolle met her at a local coffee shop, there is an effort to meet new friends. Nicolle was putting on her biggest flex when she brought up the idea of her being in a band. Ally responded enthusiastically as the conversation continued. Nicolle asked if Ally could play any instruments, and Ally responded with “well, I played guitar for a year in high school, and I played saxophone for a bit.” Nicolle followed with “Can you play the bass?” Ally, “no.” Nicolle, “Could you learn?” Ally, “Sure!” And that’s how we all came together,” Bell recollected with a laugh.

From activism to philanthropy, Strange Breed demonstrates that actions speak louder than their thought-provoking lyrics alone. Changing society takes both words and actions, and Strange Breed does both with vigor.

“There isn’t a shortage of non-profit organizations in Vancouver that need support. We all live(ed) in East Vancouver, which is notorious for its homeless population. I think seeing such an up close and personal struggle on a regular basis lead us to lean more towards helping women’s shelters or starting jacket drives. But really, if there is a non-profit organization that needs help, we are happy to volunteer our time and energy.

Fans in Ottawa can expect a safe space when they see Strange Breed live in concert.

“We strongly promote safe spaces for queer people in every space that we occupy. We do not tolerate bigotry or harassment in any shape or form. Even if you’re just “joking around with your buddies.” We want everyone to feel safe being their authentic selves and having the best time possible. That’s what rock and roll is all about!! We can’t wait to meet you,” Bell concluded.

Sparklesaurus and Green Girl are also playing the show. Doors are at 9 pm, tickets are $10, and the event is 19+. Avant-Garde Bar is located at 135½ Besserer Street in downtown Ottawa.

For more information about the concert visit the event page on Facebook.

Forex Trading- How Does It Work?