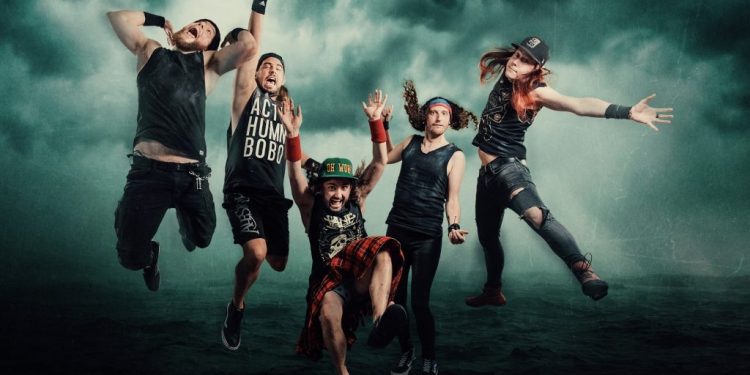 “It started in the dark days of around 2004. I met some friends, and we thought we’d start a band, some goofy power metal band because that was what we were into. I had written this song about pirates and said hey guys, let’s play this song I wrote. They thought it was a cool song, and we played it. The next week I wrote another song about pirates, and before we knew it all our songs were about pirates. People came to our gigs in pirate costumes, so I guess we are a pirate band now, cool! It was never a deliberate thing to be a pirate band, it just happened. It spiraled out of control, and we got to where we are today eventually,” Christopher Bowes recounted.

“We were just local kids in a band from a small town in Scotland, and the whole thing kind of happened accidentally. We got very popular very quickly, more than I ever could have anticipated. We were thrust into this world of being on tour and on these big stages. Some of us didn’t want to be there, it wasn’t the life they wanted, so people quit, lineups changed, and we found cool people to be in the band, and that’s how we ended up with the current lineup of people. The latest one to join the band was our guitar player Máté in 2015. We’ve had a stable lineup since 2015. He’s from Hungary, one of those silly countries from Europe. He’s great, just an amazing guitarist, funny, and fits the band perfectly. Everyone knows what they are doing, they’re professional and fun,” Christopher Bowes replied.

In 2007, Christopher Bowes submitted the Alestorm demo to Napalm Records and were signed to the label soon after.

“It was almost accidental. Around 2004 or 2005 we recorded our first demo, we recorded 3 songs, and we did nothing with it. We did two shows, and that was that. A year later, I thought we should probably do something with this band. On a whim, I just sent our demo to Napalm Records. At that time a lot of our favorite bands were on that label like Týr, so we sent this demo, and they literally replied in under 24 hours saying yes, you’re great, here is a record deal. We didn’t know how shit works, we thought this was normal. We signed this record deal, and things got so big overnight. I guess when they heard the demo, they thought this was going to be big, and it turns out they were right,” Christopher Bowes said with a smile.

In 2017, Alestorm released their most recent album called “No Grave But the Sea”. The album charted number one on the Billboard Heatseekers and number five for Independent Albums.

“You look at those charts, and you think it’s crazy. Number one for Heatseekers, and number five for Independent Albums. But if you look at the regular Billboard 200 album charts, that album was 250th. Even if we think we’re a pretty successful metal band, it’s nothing compared to these huge name bands. If you look at what’s number ninety-seven is in the charts, it’s an AC/DC compilation from the early 90s. Who the hell is still buying AC/DC compilation albums? It’s weird. You think you’re doing something big, but then it’s nothing compared to what AC/DC do week in and week out with an album no one has ever heard of, it’s crazy,” Christopher Bowes reflected.

Notwithstanding this, the charts do indicate Alestorm is more popular than ever in Canada and the United States.

“It’s still good, we’re doing better in the USA and Canada then we ever did before. I hope we can continue that. It’s always depressing when your newest album sells less than your previous one, and people think I guess you suck now. We set obvious targets for ourselves. If we don’t reach that position in the charts next time, we must do some dumb spin thing. I’m hoping people like what we’re doing next because I think we’ve all gone slightly insane and are making stupid albums these days. I hope it pays off, and people like our stupidity. Our next one is going to be very silly and very good. We’re working on it right now, and it’ll come out next year. We’ll see what crazy stuff happens next,” Christopher Bowes hinted.

On the morning of the interview, Christopher Bowes saw the latest draft of the album cover art. He won’t disclose the name of the album or the cover art just yet, but he did indicate a timeline of when the album would be recorded and released.

“This morning I saw the latest draft of the album cover. I’m not going to reveal what it is just year. It’s still all in the formative stage. We’ve written all the songs. We’re going to the studio in January to record all of them. It will all come out sometime next year, probably in May. We’ll see, things take time. Record labels must do all these pre-promo things and send stuff out to journalists. The album is happening, it’s not a maybe, the songs are all written. We have studio time booked, we have a release date set give or take a few days. It’s coming,” Christopher Bowes disclosed.

“Making videos is one of the fun parts of doing this thing once the songs are done. Our record label is very keen on videos. I think they know it’s the future and stuff, so they give us as much money as we need to make whatever the hell we want,” Christopher Bowes responded.

“We know this studio in Serbia, in southeast Europe where they can do anything. It’s crazy. They have this huge warehouse that’s all green screen. It’s great because I email them with the stupidest ideas and they ‘say yup, we can make that happen’! On the last album I wrote these guys that I want to fight our identical twins, except they are midgets and they said, ‘yup, we can do that’! I want things to explode, I want hot babes, and they can make it all happen. It’s incredible. So, I think this next time, I’m going to go completely insane with ideas and it’s going to be stupid. I want to have this video where this lady gives birth to a baby, and the baby has my face and I’m singing the song. We can do all this shit because everything is possible! It’s the funnest thing because we get to act our stupidest desires with a high budget. We get to make our own ridiculous Hollywood movies for free. It’s just the funnest thing,” Christopher Bowes went on.

In addition to the Canadian Tour, Alestorm is also playing a festival in the UK this coming summer of 2020 in which they will share the stage with legendary bands like KISS, Iron Maiden, and System of a Down.

“A lot of the festivals we do, the bands are European metal like Savitar or Blind. It’s cool that we’ll be playing on a stage with System of a Down, Kiss, and Iron Maiden. It’s classic, all the bands I use to love when I was 15 years old. It’s exciting and I’m looking forward to that, hanging out with some cool band’s backstage,” Christopher Bowes stated.

For the Canadian tour, Alestorm has special merchandise – a Canadian themed band t-shirt.

“It’s something we’ve done recently. Let’s get custom artwork for every tour we do. We had a show in the Netherlands back in March of this year, and it was our biggest show ever. We printed a special t-shirt for this show and never printed it again. We’re doing it again for this tour of Canada. Fans love these exclusives, where you’re getting something nobody else in the world is getting. I know a few cool artists who can draw this stuff. We have an idea, and we can get somebody to make this idea happen. It’s one of the coolest things about being in a relatively popular band, where there’s a budget and a fan base that wants it. Our Canada shirt is sick,” Christopher Bowes noted.

Canada is the home of fine beer and whiskeys. What kind of beer does Alestorm drink?

“When it comes to beer, we like shitty ass light beers. High alcohol, low calorie, that tastes like nothing – is my favorite kind of beer. Also, I like Canadian Whiskey, Canada has a lot of whiskeys and good ryes. You don’t get a lot of good rye near us. Good booze Canada, well done,” Christopher Bowes remarked.

Fans of Alestorm can also expect to see the infamous giant inflatable duck at the Brass Monkey in Ottawa on November 6th.

“Yes, we are (bringing the duck)! We ran out of ducks. We found this supplier of ducks online; we’ve been using for ducks for years. Obviously, there are not many people who want to buy 6 feet tall inflatable ducks, so they only made so many of them. I think we bought every single one of them. There are no more, so what do we do? Because they always break when we throw them into the crowd. We found a supplier in China who can make us custom Alestorm inflatable ducks with eye patches and the band logo on them. We’ll be bringing them out for the first time in Canada. It’s going to be fun, and they are going to be 50% bigger than our last ducks at about 9 feet tall. I’m looking forward to going to the Brass Monkey and having a fun time,” Christopher Bowes concluded.

Mexican Restaurants You Need to Try in and around Cornwall