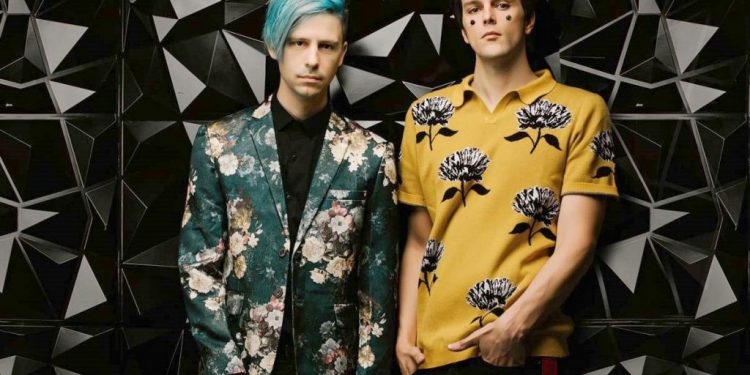 Salt Lake City, Utah – American music duo I Don’t Know How But They Found Me (or abbreviated as IDKHow) released an EP titled Christmas Drag on November 15th, 2019 via Fearless Records – just in time for the holiday season!

I Don’t Know How But They Found Me is an all-star musical duo that consists of lead vocalist and bassist Dallon Weekes (Panic! at the Disco) and drummer Ryan Seaman (Falling in Reverse).

The festive Christmas album is a follow-up to their 2018 debut EP titled 1981 Extended Play.

“Christmas music always seems to be a ‘love it or hate it’ thing with most people, but I have always been a sucker for holiday music. And I’ve written a few of my own over the years, so I thought it would be fun! It was”, Dallon Weekes stated.

Dallon Weekes shared a fond Christmas moment getting a toy guitar at the age of 7. However, he wouldn’t get a real guitar until the age of 15.

“I remember asking my parents for a guitar for years and when I was about seven, they bought me a toy guitar and microphone. I was thrilled to have them, but I didn’t get my hands on the real thing until about fifteen or so”, Dallon Weekes reminisced.

Since becoming a father, Dallon Weekes has a very different perspective on Christmas.

“It’s more work than it used to be. Santa has a lot of jobs and he’s got to be very sneaky about it all. So, I’m happy to help. But seeing how special it all is for my kids is pretty amazing”, Dallon Weekes disclosed.

A music video was released for the first single and title track “Christmas Drag” which is a new version of an old song Dallon Weekes wrote while with The Brobecks. The song has already been streamed over 100,000 times on YouTube in less than one week.

“The song is pretty old, but never got a proper recording or a proper release, so it’s been on my ‘to do’ list for a long time. The lyrics I know are pretty depressing, but it’s about missing someone that you love at Christmas”, Dallon Weekes explained.

There is also a cover song on the new EP: Slade’s “Merry Christmas Everybody”.

“I think I subliminally fell in love with that song over the course of several years of being a ‘Doctor Who’ fan. They always seem to sneak that song in an episode at Christmas. One year, I finally decided to look it up. It’s a crime that it isn’t as popular in the States. It’s a fantastic song”, Dallon Weekes went on.

The other song on the album is called “Oh Noel”. It has a very classic holiday sound with powerful vocals and beautiful piano work.

“I wrote ‘Oh Noel’ with a friend named Nate Pyfer. He is this great singer/songwriter/musician from Provo, Utah. It was all very organic and easy. It was recorded in a single take on the first try using this slightly out of tune, upright piano. I’m really happy with how it turned out”, Dallon Weekes replied.

Dallon Weekes is perhaps best known as a member of Panic! at the Disco from 2009 to 2017. He was the bassist, and he also was a backing vocalist, keyboardist, and songwriter for the band. He’s co-credited for writing hit songs like “This Is Gospel”, “Miss Jackson”, “Vegas Lights”, and “Girls / Girls / Boys” all featured on the Platinum-certified Too Weird to Live, Too Rare to Die. He was also nominated for Best Bassist at the 2015 Alternative Press Music Awards.

“Ryan is super talented and a total professional. We’ve been friends for a decade and he’s just the best dude to work with”, Dallon Weekes noted.

The duo was signed to Fearless Records, and the rest is history.

“Fearless has been very helpful bringing us to more and more people. Which we’re very grateful for”, Dallon Weekes added.

In the meantime, I Don’t Know How But They Found Me are planning a new album, and they also hope to tour Canada sometime next year.

“I certainly hope so! We love playing in Canada! We’re keeping our fingers crossed that we will get to record an album and head to Canada ASAP in the new year”, Dallon Weekes explained.

Dallon Weekes ended this interview with a holiday message for all his fans.

“I hope everyone is able to have a safe and happy holiday, whatever you may celebrate! And I hope we get to see you soon”, Dallon Weekes concluded.

I Don’t Know How But They Found Me are in concert again on December 3rd in Las Vegas. Tickets are available online.

A Guide to Getting into Shape at Home