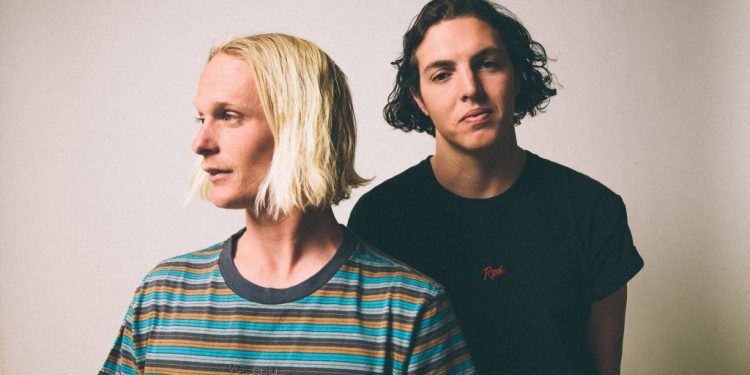 The New South Wales duo of Zach Stephenson and Billy Fleming recently released the music video of their new single “I Missed Out”. Hockey Dad worked with Greg Hodgson on the new music video which has a 1990’s VHS vibe to it.

“We’re super stoked with the new single and how everybody is reacting to it. For the video, we were inspired by the work of Greg Hodgson who has worked with our friends The Pinheads before. He also does a lot of projection work for live festival sets. Greg uses all analog outboard equipment so you will also never get the same glitch in the video twice. We wanted the video to have an energetic, almost live feel and I think the warped VHS vibe worked out really well,” Zach Stephenson said.

Growing up, Zach and Billy lived in the same neighborhood. They played music together and formed Hockey Dad.

“We’re two mates that grew up 2 houses away from each other so naturally, we were gonna start a band and tour forever,” Zach Stephenson reminisced with a laugh.

“Our third album was recorded in the same studio as Blend Inn so we were familiar and comfortable as soon as we started. I think that gave us more room to work on the songs themselves as opposed to working on sounds. We spent a few weeks before the beginning of recording in a desolate house about 5 hours from Sydney. Just to flesh out all our ideas and record any new spontaneous stuff that came our way. In the end, we wrote way more new songs in that house and a good chunk ended up on the record,” Zach Stephenson noted.

Perhaps Hockey Dad’s best-known song is “I Wanna Be Everybody” that has been viewed over a half-million times on YouTube. Many fans believe they can hear a Nirvana influence in one of the songs opening rifts.

“To be honest it wasn’t a direct inspiration at all. It just ended up sounding that way (haha). Our inspirations seem to change from day to day. It’s hard for me to listen to a specific band constantly to get inspiration. It needs to come from something you’ve never heard. Moments like that click your brain into gear and open up a whole other bunch of ideas you never knew were in your head,” Zach Stephenson stated.

The upcoming Hockey Dad tour brings them to Canada, the home of ice hockey.

“The band name comes from a gag on The Simpsons. We really had no idea how big hockey was in Canada until the first time we visited. So it’s always kind of funny and special to represent hockey in the land of hockey,” Zach Stephenson replied.

Hockey Dad will be touring with Australian bands DZ Deathrays and Horror My Friend.

“DZ Deathrays we’re the first band to take us on a full Australian tour in 2014 I think! They showed us the ropes and really helped us out when we were just beginning so we’ve been really great friends since! Horror My Friend are also our good friends out of Adelaide! They are fast and loud and have some of the best hooks imaginable. The whole tour is going to be one big ear-ringing party,” Zach Stephenson exclaimed.

Hockey Dad is looking forward to their gig on December 19th at The 27 Club in Ottawa.

“Can’t wait to see y’all! Please leave us any tips on how not to freeze to death over there,” Zach Stephenson concluded.