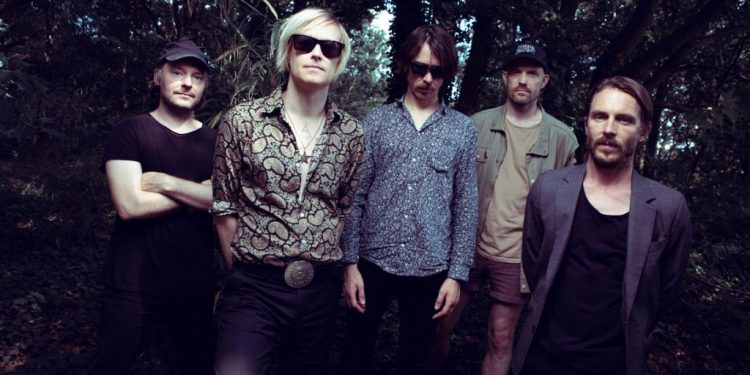 Montréal, Quebec – Political punk band Refused have a new album out called “War Music” and they are going on a World Tour that includes a concert on February 24th, 2020 at the Mtelus in Montreal.

Refused released three full-length albums before splitting up in 1998, including the critically acclaimed record “The Shape of Punk to Come”. In 2015, Refused released “Freedom” on Epitaph Records.

Their fifth album “War Music” came out on October 18th, 2019 via Spinefarm Records. It’s a musical departure from their previous album titled “Freedom”.

“With social media and the reviews, the feedback has been great actually. When we released “The Shape of Punk to Come” that set the bar possibly high. When we did “Freedom” it did clean the slate for us, I think. A lot of people when they heard “Freedom” said this was not what we expected or wanted. For this new record, people kind of lowered their expectations, but not in a bad way. They listened to this record with more of an open mind, and the reaction so far has been very good. There have been tons of great reviews and excitement,” vocalist Dennis Lyxzén explained.

“When you create art, and when you create music, you set out to create what is in front of you. In a way “War Music” is a reaction to freedom, so it a different vibe than “Freedom”. We are forward-thinking people, so we don’t want to rehash the past. I think there are reference points to “The Shape of Punk to Come” and “Songs to Fan the Flames”. I think if people heard “Freedom” and then heard “War Music”, they would recognize some of the ideas more from the past albums than on the previous record,” Dennis Lyxzén added.

Refused combine great music with thought-provoking political lyrics. Politically these are arduous times, and that makes the band’s message even more poignant in the present.

“I think there is an aspect of what we were saying in the scene and in the world of the 1990s that made our politics operate slightly in a different world than it does now. Now we don’t operate so much in a subculture or subgenre but more in the realm of rock music. I guess it makes us more radical because we’re that type of band. Maybe the times we live in influence the type of band that we are, but I also think the times we live in make a lot of people a bit afraid to speak up and talk about politics. We come from a background of punk and hardcore, and it’s always been what we’ve done. But if you’re a rock band today, it’s scary to talk about politics because of the social media climate, the political climate, and the polarization of peoples. I think a lot of people are intentionally not talking about politics, but maybe they should,” Dennis Lyxzén reflected.

There is some optimism though thanks to the youth. For example, Greta Thunberg who is also from Sweden is a strong voice for change.

“I think it’s glorious, I think it’s amazing. I became a vegan in 1993, twenty-six years ago, and one of the things we talked about then was this waste of resources going to producing meat and the effect it has on the environment. People laughed at us and said we were fools and wondering what were we talking about. When a youth movement comes up, and they talk about the environment and they also talk about the effects of the meat industry, it’s amazing. When I was a young punk and wanted to talk about politics, the adult world had a very condescending attitude towards you being political at a young age. People would say it’s good they’re political up to a certain point, but don’t get too radical and too political. Whenever Greta Thunberg does what she does, it’s super inspiring. For us, we’re older, and we’ve been through the wringer a couple of times. When you see what she’s accomplished, what she’s talking about, and the sort of movement that goes with it, it’s powerful, and I will back her every day of the week,” Dennis Lyxzén stated.

Prior to the release of the album “War Music”, Refused released the music video and single for the song “Economy of Death” – symbolizing the struggle between East and West as nothing more than a game.

“It’s funny, the music video for “Economy of Death” is what we call a moving visual. Had we spent proper money on a video, it might have been more substance than two guys rolling the dice. The symbolism of it is that you have politicians and military that are toying with our futures and our lives. The way capitalism infringes its military power upon people is what you see in Chile, El Salvador, Lebanon, and Hong Kong. You see capitalist regimes fighting back against its own people who want to live a decent life. It came quite timely, that song, and that video,” Dennis Lyxzén replied.

Another music video and single from “War Music” is called “Revolution 001” in which Dennis Lyxzén has a dance-off against Swedish Nazis.

“It’s hard for people outside of Sweden to realize that the guys dancing in the video are dressed exactly like the most radical Nazi party in Sweden. That’s what the Nazi’s here look like when they do their demos (demonstrations). They are called the Nordic Resistance Movement or some bullshit like that. Our whole take on it is me having a dance-off against fascism. When they’re on the flag and doing all these hand gestures, some of them look like swastikas. It’s our take on fascism and the rise of the alternative right. The guys in the video are just dancers (and actors), they are not Nazi’s, but in the video, they symbolize the radical Nazi movement in Sweden. Our idea was to make fun of them, make them more homoerotic, and have a dance-off against fascism. At the end of the video, I’m toying with them and directing them. That’s the idea behind the video, and it’s quite funny because the Nazis figured out we did this video, so we’re all over the Nazi websites in Sweden, and our YouTube channel comments are overrun by Nazis right now,” Dennis Lyxzén said with a laugh.

This is not the first time Dennis Lyxzén has faced the ire of the right-wing. He did so with his previous band The International Noise Conspiracy with the song “Capitalism Stole My Virginity”.

“The International Noise Conspiracy was published in a right-wing magazine run by old stock Conservative capitalist. The article in the magazine was about the worst songs about freedom. According to the article, The International Noise Conspiracy song “Capitalism Stole My Virginity” was the worst song written about freedom ever – which I thought was funny,” Dennis Lyxzén said with a smirk.

Although Refused are labeled as a hardcore punk band, their musical style is quite eclectic blending jazz and electronics with rock and punk.

“First of all, we love music, and we’re very open-minded about what music does. When we discovered punk and hardcore, it was a liberation for us, something that opened your mind. For a lot of people punk and hardcore are very defined and a closed room, but for us anything is possible. We just love music, and when we create music and art, the idea is to have a very flexible open mind and incorporate anything that’s going to be exciting now. A lot of weird stuff comes into our music because we love music. We don’t want ourselves to be defined by a certain thing. Granted we are a very heavy guitar-driven band, but you can use different ideas to incorporate into that to make it more interesting,” Dennis Lyxzén noted.

Music fans were disappointed in 1998 when the band announced, “Refused are f#cking dead”. However, the breakup has allowed the band to reunite with more experience and a fresh perspective.

“Back then, it wasn’t in the cards to continue, we were so burned out. We have the experience, we grew, and became different people. I think that is what enables us to be here today to create this music. I think it was a blessing, obviously frustrating at the time, but a blessing because had it continued, we might have put out one more record and broken up for good. This long break apart gave us the longevity we wouldn’t have had – had we tried to stick it out in the 90s,” Dennis Lyxzén stated.

Punk O’ Rama Volume 5 released via Epitaph Records featured songs by both Refused and The International Noise Conspiracy. Compilations were a vital way to hear new music before the era of music streaming.

“There were similar compilations in Europe. I think for a lot of people that’s how they discovered Refused or The International Noise Conspiracy. It’s hard for me to assess the impact, but I’ve talked to a lot of people who discovered our music on this or that compilation. It’s cool that there was a time when the punk compilations could open your eyes to a bunch of new bands,” Dennis Lyxzén recollected.

Refused are a band that have left a legacy. They have inspired countless bands including Linkin Park, Rise Against, Steve Aoki, Paramore, Thursday, Dillinger Escape Plan, Blink-182, and AFI; plus, countless independent bands alike.

“It was weird in 2012 when we were doing a reunion. Someone wrote a book about Refused, and there was an art exhibition about Refused, all these things that signal book endings. But we’re still relatively young, we’re still doing this. When I hear about bands that got inspired by us, it’s humbling, and an honour that people like what we did. At the same time, my head is in the next song, the next project, the next album, and the next move. I tend not to get stuck up in the past. There will be a day when I sit down and think about it, but not today,” Dennis Lyxzén replied.

The Dead Kennedys are another political punk band that broke up before their time, in the 1980s, and became legendary a decade later in the 1990s, despite the members of the band still being relatively young at the time.

“The Dead Kennedys was a huge influence on me, the political ideas, and the fact that they were a very outspoken and intelligent band. The Clash, a similar band, was very political, outspoken, and smart too. The way they did music, they didn’t give a f#ck about the rules. There are a bunch of those bands over time that has really resonated with people. Bands like the Dead Kennedy’s, Clash, and maybe to a certain extent Refused, we write great songs. Without great songs, just the politics would be fine, I guess. At the end of the day, if you’re a musician, you need the tunes, otherwise, you’re just an angry man screaming about politics. Bands like The Dead Kennedy’s and Clash have great tunes, they have great songs,” Dennis Lyxzén said.

Fans of Refused can buy tickets now for the concert on February 24th, 2020 at MTelus in Montreal.

“I’m incredibly excited, we’re brining Youth Code with us, and they’re fantastic. I’m excited to play the new songs live. I like to play in Canada. I know it’s going to be a great night, and I’m looking forward to that,” Dennis Lyxzén concluded.