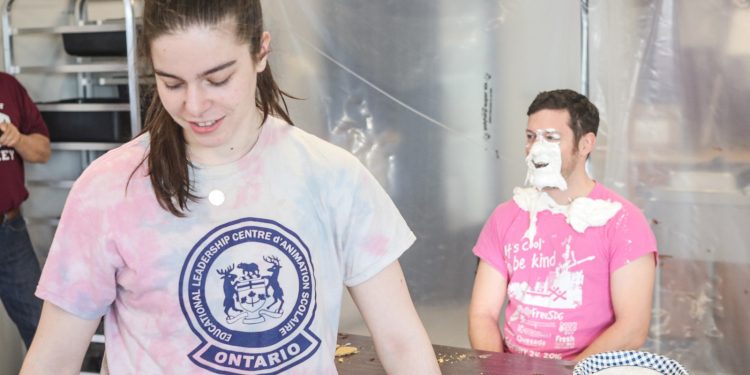 Cornwall, Ontario – Once again students and faculty at the Ontario Hockey Academy (OHA) celebrated Pi Day. Pi Day is an annual celebration of the mathematical constant π. Pi Day takes place on March 14th since 3, 1, and 4 are the first three digits of π.

Since March 14th is on a Saturday this year, Pi Day was celebreated earlier in the week at OHA.

To start, boys coach Kevin Rawlick challenged students to a pie-eating contest and he easily won. Students erupted in cheers, smiles, and laughter.

Also, student-athlete Anna Levia was able to recite the most numbers of Pi and she won the Recite Pi contest. She was a runner-up in the contest the previous two years.

In addition, students paid to throw pies at their coaches, teachers, and principal to raise funds for the local Big Brothers Big Sisters organization. $335 was raised. Pictured above is honour roll student Gabi Davidson Adams after she tossed a pie at Principal Jesse Ferguson.

In summary, students had lots of fun participating in a variety of entertaining and amusing games such as the wheel barrel relay.