Agree to Disagree: Ribfest cancellation ain’t no victory. Why are some councillors acting like it is? 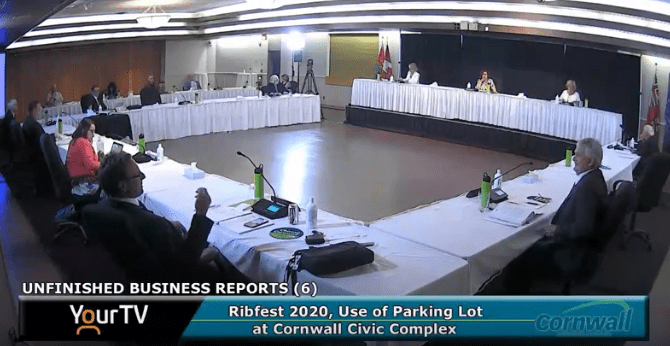 Ribfest is the biggest Summer event of the year in Cornwall.

It is also the Optimist Club’s Biggest fundraiser of the year. But with Covid-19, and the limit on mass gatherings, most events the likes of Ribfest have been cancelled across the nation. So when the Optimist Club, of which I am a member, got creative and came up with an idea to save the event by turning it into a drive through and pick up option, thousands of people, patrons and volunteers alike, found hope. Hope that summer would somehow retain some sort of normalcy.

The event was approved by the Eastern Ontario Health Unit a few weeks ago and yesterday, the motion landed on the council floor. The city had to give permission to the Optimist Club for the use of the Civic Complex’s parking lot.

After deliberating extensively about it, councillors took a vote. The motion was squashed.

The main reason cited was that our local restaurants have suffered a lot this year, so bringing in outside food vendors would be a blow. As councillor Maurice Dupelle stated “I don’t think we can do this to our restaurants who are just starting to re-open.”

While it is absolutely true that restaurants have suffered, councillors, except MacDonald, Hebert, Bergeron and the Mayor, seem to completely forget that non-profit organizations have also suffered immensely. With no possibility of bringing in revenues, and not funding, how are they supposed to survive?

They also seem to have forgotten what losing Ribfest means to this community.

As the Optimist Club states, “The funds raised by Ribfest are used to supplement families that have children in hospitals such as CHEO. They are used to purchase grocery cards for families that need a little help. They help pay for breakfast with Santa. They pay for the awards and expenses for the Youth Achievement Awards produced with YourTV. They help purchase thousands of dollars in toys for the Optimist Toy Drive that ensures every child has a gift to open on Christmas Day. They help send out bursaries to every school in Cornwall. They help send kids to camp.”

This is but a small sampling of what the Optimist Club does. They also do lunches at Agape, help support the Kids and Cops fishing derby, have the ball hockey and soft ball leagues and the pine derby racing tracks.

While the money raised by Ribfest stays 100% in Cornwall, the Optimist Club also supports the community by purchasing advertising in most local media, doing their printing locally, buying thousands of pounds of ice, propane and firewood from local vendors, hiring many local musicians and booking hundreds of hotel rooms during the 4 day festival. Sure, this would have been reduced this year, but at least, it would have been something… Better than nothing.

So I am puzzled to see councillors Hollingsworth and Gardiner, above, appearing to be doing a happy dance at the defeat of this motion. Why the big smiles as if they won something?

Nothing was “won” Last night. Last night was a sombre night. Every councillor around that table should have been devastated to have to make the hard decision to take away this organization’s only possibility to raise funds. They should have been heart broken to have to pull the plug on an event that brings so much joy to Cornwallites. This was no victory, by any stretch of the imagination. They should all have had long faces and heavy hearts, not huge smiles going from ear to ear. Did I see a thumbs up? Or a fist bump even? I don’t know about you, but I expect more from elected officials.

There was a safe and easy way to proceed with this. This was not about the safety of citizens. It was about money, local money, and who they feel deserves it. City council has helped local businesses. The provincial and federal governments have helped small businesses. But sadly, most non-profits have been left to fend for themselves. Giving them the opportunity to hold this event would have made a huge difference and would have allowed citizens to decide on their own whether or not to support the Optimist Club or a local restaurant for that one week-end. As Mayor Clement said, “I think people need more, not less”.

Now, programs, such as the toy drive are in jeopardy, and Lord knows they will be needed this year more than ever.

Here is the result of the vote: