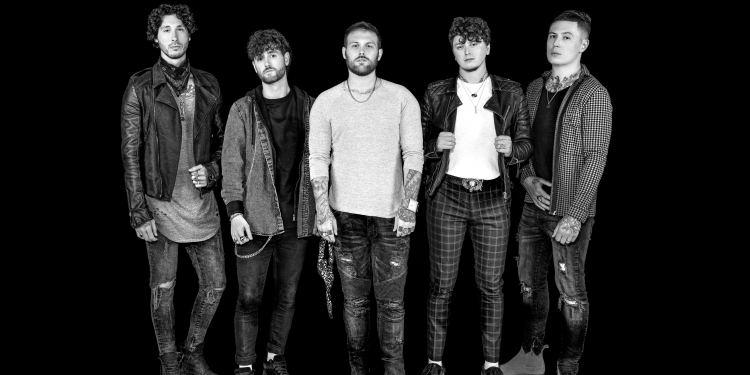 Their energetic new single “Alone Again” has already been streamed millions of times. The song is featured at the start of the new album and will be played at the front of their playlist for live shows.

“We have “Alone Again” right in front of the set, and I think it’s for the same reason it’s at the front of the album. The energy, suspense, and build-up, the whole continuous lift of the song – It feels good, it translates well and makes a lot of sense on the journey that is the Asking Alexandria collection of music – whether it’s in the context of a record or a show,” vocalist Danny Worsnop replied.

“It was a big part of the result of a lot of soul searching and a lot of learning about myself and the journey. Learning and accepting and going back to the simpler things. Realizing that a lot of the things I was chasing, and a lot of the things I thought were parts of me or things I wanted, weren’t necessarily the things that made me happier. Much simpler, I’m very much the independent lone wolf kind of person, taking my life back to having a very small circle and being very self-contained. It’s better for me; I find myself happier that way,” Worsnop disclosed.

Watch the music video for “Alone Again” on YouTube.

Other songs on the album, like “See What’s on The Inside,” “Faded Out,” and “Never Gonna Learn,” add to this inward-looking motif that is so prevalent in these contemplative lyrics.

“It’s been a constant in my work over the past 7 or 8 years, figuring out who I am and where I belong. I felt like I lacked that. It’s something I’ve always tried to figure out. It feels like I’m getting closer. I think this album, more so than any other, definitely followed that journey because it was happening as I was writing it,” Worsnop explained.

Sonically, the Asking Alexandria song “The Gray” is simply superb. According to Danny Worsnop, that was the most challenging song to write on “See What’s On The Inside.”

“A song called “The Grey” (was the most challenging to write) because it used to be a completely different song. The only thing we kept from it was the chorus for a multitude of reasons. The rest of the song didn’t make it to the album. It was challenging, going back in with the same chorus concept and writing an entirely new song. I wouldn’t say I like doing that, but we had our reasons and a purpose for it. That was the challenge, figuring out what that song was going to be. I think that was the only one we struggled with in any regard,” Worsnop replied.

In addition to genuine and thoughtful lyrics, the way Asking Alexandria recorded “See What’s On The Inside” further adds to the record’s authenticity. In an age of file sharing and recording parts of songs remotely – Asking Alexandria went back to their musical roots and influences when recording in the studio.

In early 2021, all five members of Asking Alexandria found themselves together in the same studio at the same time for the first time in over a decade. They recorded their seventh studio album together in a house in Franklin, Tennessee.

“Yes, we did pretty much every other record with at least an amount of doing it remotely. We were all together in the studio for the first record, but it was a lot of programming; it was a lot of computers and digital stuff. For the second album, we did half of it together, and from that point on until this album, everything was recorded separately, and a great deal of it was done inside a computer using a lot of program stuff,” Worsnop said.

“For this album, we wanted to get back in touch with our musicianship. The same as the concept with the artwork, going back to our musical roots of that 60s, 70s, going into the 80s process of creating and making this music. Everything on the album is live. With the help of our wonderful studio engineer, we used instruments that were invented and built-in that studio to make specific sounds versus finding samples and doing it digitally. We were focused on it being a very analog approach, a very hands-on and real and authentic in the room experience. Hopefully, this translates to the listener as well,” Worsnop added.

Vocalist Danny Worsnop identifies some of the musicians and bands who helped influence Asking Alexandria.

“I think we all come from slightly different ones, but I think there is a lot of intertwining when it comes to the Rolling Stones, The Beatles, Elton John, Queen, and Michael Jackson – they were kind of big for all of us. Personally, for me, I’m a ballad guy. I love the Rod Stewart’s, the Michael Bolton’s, moving into Bryan Adams. Carrying into this album, more recently, there was a lot of Lenny Kravitz and Chris Cornell. A lot of my beginnings were in the blues, but it made sense to me and fully connected to me when it was the combination of very blues-inspired rock music that came out,” Worsnop noted.

It has come full circle for Asking Alexandria. Their breathtaking music has inspired the next generation of young and aspiring musicians and bands.

“It’s a good feeling, of course, but at the same time, and I can only speak for myself in this regard, I try not to pay too much attention to that. I’ve had times in the past where maybe I was a little too self-indulgent with myself and maybe enjoying the fame and the other side of what we do a bit too much in the past. I’m trying more than anything at this point in my life, focus on just creating and being the artist and making the songs. Maybe in a few years, I’ll have gone to a position where I can more maturely approach the fickler side of success. As good of a feeling as it is to inspire people and affect people in that way, I try to manage a healthy relationship with it because it’s very easy to get carried away,” Worsnop went on to say.

Cumulatively, Asking Alexandria has had their music streamed or played over a billion times. Digital streaming has made songs more accessible to larger audiences. Although nostalgia still exists for physical media like vinyl records, Danny Worsnop sees the silver lining of the digital age.

“Generationally, I think I will always have a different relationship with physical music than digital music. Realistically, this is the time we’re in, and very close to seeing the end of physical music sales. I know vinyl is still hot; a special kind of romance is attached to vinyl records. I think in the very near future we’re going to see the death of physical music being bought and sold. It’s a sad thing, but at the end of the day, when we were kids, we were putting everything on cassette tape, and I haven’t seen one of those in many years, and I don’t put too much thought into it. I see it as a change of times. It’s opened so many avenues for consuming music in more places and more ways and having access to so much more. There is a beautiful silver lining to the digital space,” Worsnop reflected.

Although the global pandemic stopped bands from touring and playing live concerts, that too had a silver lining for Asking Alexandria – it gave the band a chance to reset, reflect, and grow.

“(In the past) I never enjoyed touring much. I think a lot of it had to do with not having a healthy relationship with the band’s success and my relative fame. It is a very difficult lifestyle, but I think I’m in a different place now. So, going into it, I’m more excited to re-learn how to do it. When I sat in my studio for 21 months, I didn’t have much of a problem not being on tour at all. I have a studio inside my house, so I can sit there and create all day, which is a wonderful gift to have that time off and an escape. We never had time off before, so it was almost a little bit welcome. It gave us a chance to reset and reflect, grow, and learn a lot in our personal lives and in the business,” Worsnop responded.

Asking Alexandria has played major music festivals and headlined packed concerts on five different continents. Furthermore, they have shared the stage with some of the world’s top rock bands, including Guns N’ Roses, Green Day, Avenged Sevenfold, Alice In Chains, and Slipknot.

The band has achieved unprecedented success from three consecutive top 10 debuts on the Billboard Top 200 to two gold-certified singles.

In closing, the new Asking Alexandria record “See What’s On The Inside” comes out October 1st, 2021. It can be pre-ordered here.

“Regarding the album, keep enjoying it, and we appreciate the support and the 46, 47 minutes out of people’s day used to take the time to listen to it. We put a lot of work in, and we hope people get as much enjoyment out of it as we did to make it,” Worsnop concluded.