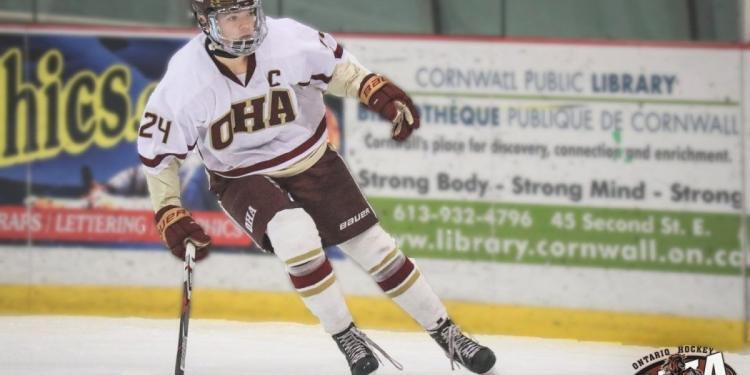 The Ottawa-born hockey player became the captain of the Boys Bantam Team in 2017-2018 while attending the Ontario Hockey Academy in Grade 9. He impressed coaches and players alike; thus, he was promoted to the Maroon Team the following season, playing alongside older boys. That season, Kaleb Lawrence led his team in scoring with 59 points in 43 games.

Soon after, Kaleb Lawrence was drafted by the Owen Sound Attack of the OHL and played there. Also, he represented Team Canada at the World U-17 Hockey Challenge.

The NHL draft took place on July 7th and July 8th, 2022, at the Bell Centre in Montreal, Quebec. Although Kaleb Lawrence wasn’t at the draft, he quickly learned he was selected.

“I wasn’t at the draft and wasn’t expecting to be selected. I was just about to head out on the golf course when I received a text message from a member of the Calgary Flames congratulating me on being drafted. Then my phone started blowing up, and I had my parents and friends calling – it was pretty crazy,” said Lawrence.

Being drafted by the LA Kings of the NHL is a culmination of Kaleb’s goal to play professional hockey.

“Once I learned it was LA that took a chance on me, I couldn’t believe it. There was so much excitement and emotion that it was tough to explain. It’s one of those things you dream of and dedicate your life to – and to see it pay off is unbelievable,” Lawrence explained.

Kaleb Lawrence has fond memories of playing in Cornwall at the Ontario Hockey Academy.

“Playing at OHA has played a considerable role in getting me to where I am today, and a lot of that has to go to my coach Rick Lalonde. He brought me to that school and did everything in his power to help me become a better person off the ice and develop my skills on the ice. Everything about the experience at OHA was amazing. I made friendships that will last a lifetime, and so many guys reached out to me that it shows what kind of place OHA is and the memories and friendships you make there,” Lawrence recalled.

While most 19-year-olds enjoy a summer break, it will be all work for Kaleb Lawrence.

“This summer, I’m doing a lot of off-ice and on-ice sessions to get my legs back under me after a long year of injuries last season,” Lawrence concluded.