Local to represent Canada at The World Cosplay Summit in Japan 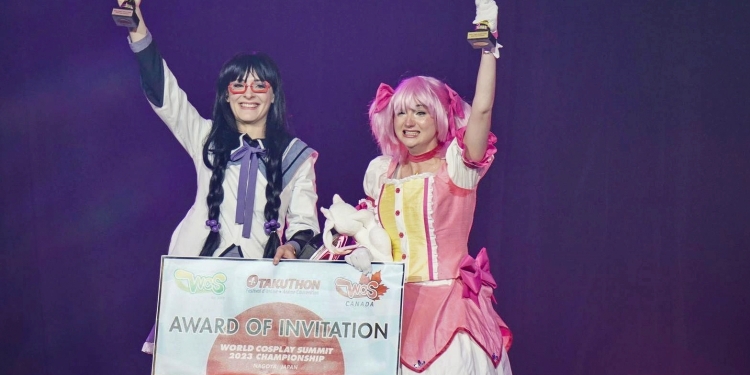 Montreal, Quebec – Local cosplayer Annie DeRochie (from South Glengarry, Ontario) and her cosplay partner Meghan Mueller (from Ormstown, Quebec) will be representing Team Canada in 2023 at The World Cosplay Summit in Japan.

Annie (aka AnnieChie Designs) is one half of Team AnniMae (a pun of the word Anime), along with her good friend Meghan (aka Mae-Gwyn cosplay). Over the first weekend of August, they competed against other skilled cosplay duos in the World Cosplay Summit preliminaries at Otakuthon in Montreal, Quebec. To the duo’s joy and surprise, they were the overall winners and therefore selected as Team Canada 2023 for the upcoming summit.

The World Cosplay Summit is an international cosplay event in Nagoya, Japan. They invite countries from all over the world to participate, and each participating country has one or a few preliminaries to choose their representatives. Those representatives then go on to Japan for a few days of mingling activities, then compete on the world stage and are judged on both craftsmanship and performance. The focus is on international friendships and celebrating Japanese media and culture worldwide.

In an interview with The Seeker Magazine, Annie DeRochie explained her reaction to winning the Canadian preliminaries along with Meghan Mueller.

“Shock. Happiness. Amazement. Disbelief. I am just so thrilled to be chosen as Team Canada with my good friend Mae-Gwyn,” Annie DeRochie stated.

Everything came full circle for Annie, who met Meghan at Otakuthon in 2014.

“My partner is Mae-Gwyn cosplay, who is Quebecois. She and I met at Otakuthon 2014, the same convention that held the Canadian preliminary for the World Cosplay Summit,” DeRochie reminisced.

The duo lives in different provinces, so there was a lot of coordination in preparing the costumes and performance.

“Because of the distance between us, there was a lot of driving on her end and a line of near-daily communication between us. I studied fashion and costume, so I have knowledge of pattern making, so I guided Mae-Gwyn through the initial process and fittings all virtually. She had never pattern drafted from scratch before, so this was a major challenge! We also had rehearsals since performance is extremely important in this competition. One rehearsal was in my kitchen. The second was in the basement of Salem Church in Summerstown, the church my family members attend. We greatly appreciated the use of the space,” DeRochie added.

According to Annie, the atmosphere was fun despite the stakes of the competition.

“Backstage was honestly a lot of fun. The other teams were friendly, and there was an overall great atmosphere despite the stakes of this particular competition. We had a lot of laughs and went through our nervous jitters together. Though fun, I will admit we were up against some stiff competition. Cosplayers who have been cosplaying for far longer than Mae-Gwyn and I. Cosplayers who have represented Canada in this competition and other international competitions in the past. And a lot of variety of skills. In the end, we had very different costumes and performances, and I was definitely shocked when we took the title. Happy but shocked. It has been my dream to be WCS Team Canada since Otakuthon first held the first Canadian Preliminary in 2014,” DeRochie recalled.

After some well-deserved rest, the next step is to prepare for The World Cosplay Summit in Japan.

“First, we rest. Everything has been a whirlwind. We definitely need a bit of a break. But going forward, we plan to work on improving our costumes and performance. Contacting the judges to get constructive criticism and feedback and improving our costumes, props, and skit. We already know a few areas could be improved on our costumes, for example. We will also have several other WCS-related events during our time in Japan, so we have a few more matching costume sets to plan before then,” DeRochie concluded.

During the first-weekend of August in 2023, Annie DeRochie and Meghan Mueller will travel to The World Cosplay Summit in Nagoya, Japan, to compete for the World Title representing Team Canada.