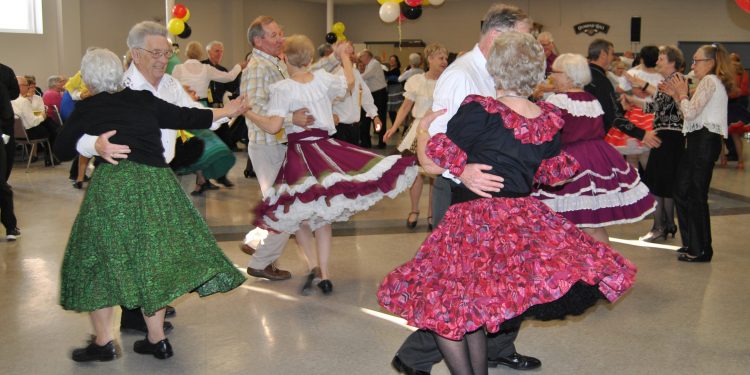 lebrated their 40th Anniversary in style. Founded in 1976 and originally known as Swinging B & B (where the B’s stood for “beginners and brush-ups”), the club was joined by participants from places including Montreal (Swinging Stars). The group hosted a celebratory dance last week which was attended by nearly 150 dancers and included callers Brian Crawford (Carleton Place) and Don Mojer (Montreal) along with Round Dance cuer Jean Clingin (South Mountain).

The mascot, MacBeezel has long disappeared and the Club badge with 2 bees swinging was replaced in 2009 with a more recogizable bee. The Club’s colours (yellow tops and brown bottoms) changed in 1995 to white tops and black skirts/pants with yellow crinolines.  While many sported these traditional Club Colours this past weekend, the event also featured many of the ladies in many beautiful coloured square dance costumes with many men wearing coordinated shirts and pants.

The Swinging B’s meet every Friday and have special themed dances for holidays such as Valentine’s Day, St. Patrick’s Day and Tartan & Kilts.   Founding Member Jim Peddie, shown here, is still active with the club and has been dancing since 1973!