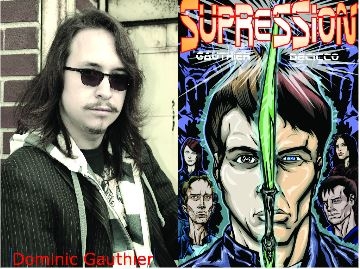 Dominic Gauthier was born and raise

d in Cornwall with an apparent creativity ever since he was very young. At age 5 he won  a provincial art and spent much of his time writing little stories in notebooks when he was in elementary school at Marie-Tanguay.  Childhood games of fantasy and superheroes while pretending to be Wolverine or other idols led to the creation of brand new adventures with characters Dominic created on his own.   Eventually, his friends grew up and they stopped pretending… but Dominic never did.

With his head elsewhere living out his adventures in his own little world, that world is not so little anymore as he finds himself venturing into those realms to fall asleep at night and of course to pursue his dreams of being a full time writer.  After high school at La Citadelle and then L’Heritage, Dominic took a year off to figure out what he wanted to do. He knew he wanted to write, act, and do film work but didn’t follow through until some time later as this wasn’t a typical career path. He studied the Acting in Film and Television program at Niagara College  which is where his writing roots returned and he started to write film scripts in order to produce them with his fellow acting buddies which eventually led to writing the comic book Supression which started off as a basic “What if?” concept. ​

“In an overpopulated world, an organization known only as “The Unknown” establish an assassination system called “The Great Order” in an effort to save the planet from its imminent destruction. Every human being will receive a target in a vision, it is their duty to eliminate it and wait for their turn to leave by the Great Order. If you choose to run, The Unknown will come after you. Due to a glitch in the system humans are faced with the decision of killing a family member or choosing to die with them. What will you do to save the ones you love?

“  What started out as a 30 page script for an independent film quickly grew into a saga of 40 issues and nearly 1000 comic book pages. Health issues saw the project cancelled and then, one full year later, Dominic decided to bring it back to life.  He found a freelancing website to help find partners in art projects and put his synopsis online to wake up the next day to 22 applications from artists around the world willing to work on his project.  Dominic picked 10 of an eventual 109 applications to  audition for the project but after a few days of receiving some great artwork, application #110 was received – former Marvel artist Gene DeCicco from New York with over 30 years of experience in his field.  More health and financial issues have delayed the project but after working together for over 2 years to make this dream a reality and after investing thousands of dollars to pay for the entirety of the black and white pages, Dominic has recently launched a Kickstarter campaign in the hope of obtaining financial help to fulfill his dream.  People can help by donating at https://www.kickstarter.com/projects/891866074/supression-comic

When the Kickstarter is completed, he will move to the final steps into finalizing the first issue of Supression which will then be pitched to publishers. Gauthier stated “I am very happy as Gene’s experience in this field really makes me trust that this will go somewhere when he expresses his confidence in the project. ”  He hopes to release the book as early as this Summer and as late as the end of the year and will be showcasing a pre-published black and white version of the book at CAPE 2016 and perhaps other Canadian conventions this Summer.  He adds,  “CAPE 2015 was definitely one of my biggest highlights of last year and I’m sure this year will be even better!”