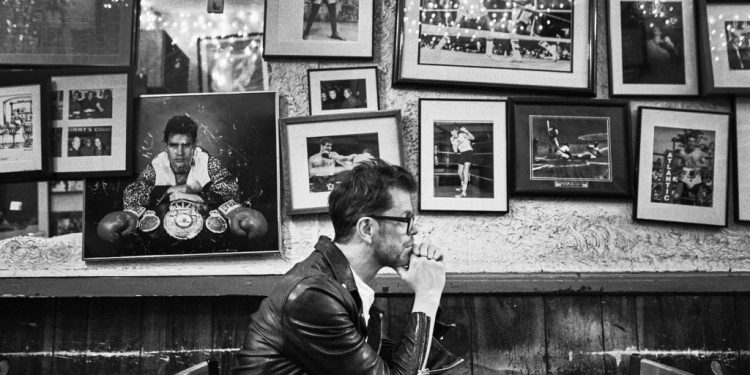 Donny McCaslin will be touring with Canada’s own Ryan Dahle – best known for his work in Limblifter and Age of Electric.

“The touring band consists of Tim Lefebvre on bass, Zach Danzinger on drums, Jason Lindner on keyboards, and Ryan Dahle singing and playing guitar. I met Ryan when I was preparing material to record from my latest record “Blow”. I remember hearing his music upon recommendation and immediately being drawn to it and how strong the melodies were,” McCaslin said.

“Ryan sent me back the first chorus he wrote for a song called “Club Kidd” which appears on “Blow”. He had written a new vocal harmony on top of what was already there and lyrics. It was really compelling, and a real moment of clarity for me. I thought this is what this record is going to be, this is the direction, this is how it’s going to come together. He’s been a key collaborator for me ever since,” McCaslin added.

“Another thing that was unique about the record “Blow” is that a year before I started recording it, I started to use electronics when I would perform live to give the saxophone different colours. On the record, the saxophone has different affectations on different songs. I worked with producer Steve Wall, and the saxaphone was treated differently on different tracks, and that was a part of the signature of that record,” McCaslin explained.

“Steve Wall is a tremendous producer, and we worked very closely together. As the songwriting started to unfold, he was involved in that process, giving feedback, and he was one of the songwriting partners for “Eye of the Beholder” which is the last song on the record. There was the post-production aspect going on for a while. It was an all-encompassing project, he was all in, and did a very great job,” McCaslin went on.

McCaslin collaborated with several musicians on the new album such as Mark Kozelek, Gail Ann Dorsey, Jeff Taylor, and of course Ryan Dahle.

“On the vocal side, Jeff Taylor and I had started to perform live and workshop some of this material in New York City. With Mark Kozelek of Sun Kil Moon, I reached out to him because I was a fan of Sun Kil Moon. I played with him about a year before that at a festival in Australia, and we hit it off. While Gail Ann Dorsey, who sings on “Eye of the Beholder,” is somebody I met through the David Bowie world” McCaslin explained.

Three music videos were released for “Blow”, and each has a very different stylistic look. “The Opener” featuring Sun Kil Moon looks like it was filmed on a 1980s VHS tape, while “Great Destroyer” has psychedelic imagery, and “What about the Body” has an avant-garde artsy style to it.

“I think the music videos are so different stylistically because of the different vibes of the tunes. There are so many ways to represent what music means to you, but I felt these three videos represented one way of looking at these songs. For example, “The Opener” with Mark in the hotel room and the actress with the lyrics, I just felt there was something compelling about the way that came together. It presented the song in an interesting way,” McCaslin noted.

Prior to the release of “Blow”, Donny McCaslin collaborated extensively with David Bowie, on his final album “Blackstar” which was released in 2016. How did this collaboration come about? For many years, Donny McCaslin worked with composer Maria Schneider. When she had the opportunity to work with David Bowie, she recommended that Bowie should collaborate with McCaslin. One-night David Bowie attended a Donny McCaslin gig with Maria at the 55 Bar, a small club in the West Village of Manhattan, New York. McCaslin didn’t speak to Bowie that night, he left right after the show; however, McCaslin was invited to a rehearsal the following week.

“I told Mark Guiliana about it, but I didn’t tell the other guys because I didn’t want anybody to be nervous. I saw him in the audience with a glimpse in the corner of my eye, and that was it. I didn’t meet him after the show or anything. Maria left with him, so I didn’t know what to think, or what his impression was,” McCaslin recalled.

“About a week later, there was the first rehearsal for the Maria Schneider and David Bowie collaboration, and I was part of that, and that’s when I met him for the first time. David Bowie came in along with David Visconti. We talked, and at one point he asked me for my contact info, and the next day, he sent me an email. The gist was he would love to record two or three songs with my group, what did I think, and here is one of the songs called “Tis a Pity She Was a Whore”, and that’s where it started. It went from two or three songs to six or seven songs that we recorded the first week of January that year. By the end of the week, they asked us if we’d like to do it again, and we said yes. About a month later we did the same thing. Over the course of that month, David sent me music, and I sent it around to the guys. In February we did another week of recording, and similarly, at the end of the week, they said we’d like to do this again. In the middle of March, we got together for four days, and the difference was Ben Monder came as well. He’s an amazing guitar player who was in my band before I switched to keyboards. He did a lot of recording and touring with me. In April we did a day of overdubbing, and it went from there,” McCaslin added.

Two days after “Blackstar” was released, David Bowie passed away. Soon after that, the album topped the Billboard 200 charts in the United States. It would become the 5th best selling album of that year selling approximately 2 million copies, and it would get nominated for several Grammy Awards. After Bowie passed away was a turbulent time for McCaslin.

“It was intense when he passed away. It was intensely sad. I felt for the people closest to him because I got to know some of them over this time of working with him. I saw a deep love, those in his inner circle had for him. They’d been with him for years and decades. That spoke to the kind of person he was. Those who were around him all the time had a deep affection for him. I felt for him, and of course, his family. My heart just went out to them. I thought how hard and how unimaginable it was, and the grief they must have been feeling. It was intense for me too, because I loved him and it was a transformative experience working with him,” McCaslin disclosed.

“Talking about “Blackstar” to the press, I was probably seen as a portal into the story. There was a lot of pressure from the press, and of course, I was trying to figure out who it was okay to talk to and who wasn’t. That was intense. It was profoundly sad,” McCaslin remarked.

McCaslin is proud to have worked on David Bowie’s final album.

“Blackstar is an album I feel very proud to be a part of and couldn’t be happier with how it turned out. I think it’s a great record, and I think it will stand the test of time. The artistic integrity of it is high. From what Bowie’s singing about, to how he sings, and the way we play together. The thing I also bear in mind is he was planning on recording again. He was working on new music. Even being quite sick, he was still very creative and talking about the next record and going back into the studio. Of course, it ended up being his final record, but I think he was still very engaged with creativity and planning on more music,” McCaslin added.

Also, Donny McCaslin has been nominated for three Grammy awards: In 2004, 2013, and 2015 respectively for Best Jazz Instrumental Solo.

“I’ve attended the Grammy Award Ceremony four times. The three times I was nominated for solo. I also attended the year Blackstar was nominated. I was asked to represent David Bowie. If I were to point to one memory, it would be the memory of accepting the award for Blackstar and being able to go up on the stage with my bandmates all together and to talk about David Bowie. I used some of his own words to illustrate his wit, and just how smart and funny he was. I had a chance to acknowledge those people around him that I have gotten to know and played an integral part in his career, my bandmates and all. That was a great memory, that felt emotional and special to be able to that. I was honoured to be asked to be there in that capacity and accept it on his behalf,” McCaslin replied.

Fans can see Donny McCaslin live in concert on his upcoming tour. He is playing the Ottawa Jazz Festival at the NAC on June 28th, and tickets can be purchased online.

“I have a history of being in Ottawa and at that festival and on that stage. I love being in Canada and playing, and I think the audience is tremendous. This is going to be something new and special. To me being able to bring Ryan Dahle from Vancouver who is going to sing and play guitar. We’re going to be premiering new music that Ryan and I have written together in the past few months, along with music from “Blow”. I’m really looking forward to being there with those people on stage and presenting this music to the audience,” McCaslin concluded.

Next month Donny McCaslin has a new song coming out called “Head of Mine” featuring Gail Ann Dorsey on vocals. That will be followed by new music, likely coming out this fall including songs Dahle and McCaslin have collaborated on together.

Trends Shaping the Face of Beauty This Summer