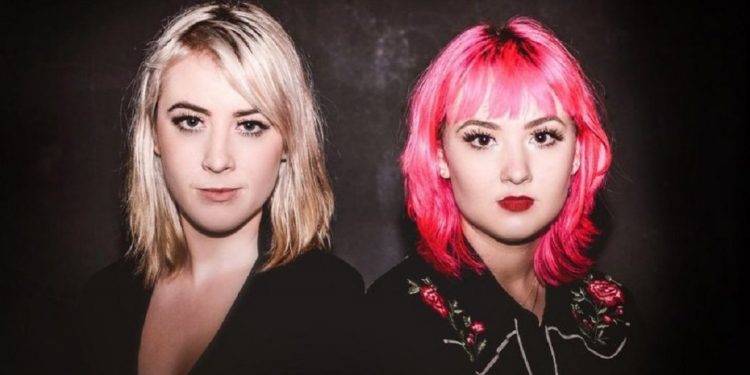 Dog Party has been compared to bands like The Go-Go’s, The White Stripes, The Runaways, and The Ramones, so that makes sharing the stage with former Ramones bassist CJ extra special.

“Back in the fall, Gwennie and I were CJ’s backing band for a special show with the Aquabats. It was a dream come true being able to play with such a legendary musician that radically shaped my musical experience as well as millions of others. Being able to join forces and hit the road with CJ again is a real honor, and I cannot wait to share the stage with him once more,” Lucy stated.

Gwendolyn and Lucy are no strangers to sharing the stage with punk legends. In 2016, they were special guests on Green Day’s Revolution Radio North American tour. What is even more impressive is that they successfully balanced college while touring with Green Day.

“After our summer tour in 2016, we dropped Lucy off at CSU Long Beach to begin her freshman year of college. Cal Poly is on the quarter system, so I started about a month later than Lucy and was in San Luis Obispo getting myself ready for the start of my junior year. Lucy had just finished her first week of college when we got an email from Green Day’s booking agent asking to talk ASAP. I coordinated a phone interview for the following morning – I could hardly sleep that night. Once we were asked to be special guests on Green Day’s Revolution Radio North American tour, we started coordinating with our professors and college counselors to see if we could pull it off. We both remained in school that term and were able to have a rockin’ time on the road while excelling in our classes,” Gwennie recalled.

“Every single show on that tour was just so magical. Words cannot express how surreal and amazing it was. One of my favorite memories from the tour was when Gwennie and I ran onstage during ‘King For A Day” and danced around with the band in costume,” Lucy added.

That same year, Dog Party made a cameo in the movie SLC Punk 2 (also called Punk’s Dead) along with Screeching Weasel, the Dwarves, and others.

“It was so fun being apart of SLC Punk 2! Before we got the role, we sent in audition tapes of Lucy and I re-enacting scenes from the first movie. The concert scene took place in the middle of our summer tour in 2014. It was set up like a regular concert – all we had to do was play our set. Everyone there was so supportive and friendly,” Gwennie recounted.

“It was a cool experience. Everyone that worked on the film was very friendly. It was awesome being able to meet the actors and the other bands! I thought it was unique and fun that the show was open to the public and everybody got to be a part of the film. There were a lot of happy and energetic audience members,” Lucy replied.

“I remember seeing SLC Punk randomly on the TV when I was younger, and it stuck with me because I thought it was rather bizarre. When I watched it when I was a little older, it made more sense,” Lucy said with a laugh.

“The album, Hit & Run, was written over two years. It delves into topics like love, heartache, and is a lot more emotional than our previous releases. The songs are laden with fuzzy guitars, thunderous drums, and hypnotizing harmonies. It also features a fun cover of Wanda Jackson’s “Fujiyama Mama.” The record shows exponential growth from our past releases,” Gwennie explained.

Dog Party also released a music video for the song titled “Hit & Run.” The video was mostly shot at an antique store.

“The song “Hit & Run” features chords that are reminiscent of 60s rock ‘n’ roll, so we figured going for vintage imagery would fit the theme. We filmed most of the music video in this cool antique store in Sacramento called Midway Antique Mall. It was super awesome because they had various showrooms set up that were completely decked out with beautiful vintage furniture. They were also extremely nice about us filming there – it was an all-around great experience,” Lucy remarked.

The journey to releasing albums and music videos, going on major tours, and being featured in a movie, all began early for the Giles sisters.

“As soon as I picked up the guitar in 4th grade, I was writing my own songs. Lucy had recently received a drum set for her birthday that same year but was too young to take lessons. Two years later, we were both taking lessons, but we never even thought to play together until a family friend, Zach Goodin, orchestrated our first band practice. We played Surfin’ USA by the Beach Boys in our living room, and the rest is history,” Gwennie recollected.

Gwendolyn and Lucy have very supportive parents that love music as much as they do.

“We are so lucky to have such supportive parents that share the same love for music that we do. I can hardly remember a childhood memory where music wasn’t constantly playing on the stereo at home or in the car. Although they didn’t play any instruments themselves, they played a huge influence in our music upbringing,” Gwennie added.

The sisters share a special bond, and like any siblings that are in a band together, they speak the same musical language.

“Working so closely with my sister is probably the coolest thing in the universe. We share a bond, both musically and traditionally, that most people can’t imagine. Playing music together has a unique, magical quality that is irreplaceable. We’ve both been in bands with other people, and it’s never quite the same. As we can both speak the same musical language, we also have a telepathic sisterly connection that amplifies our abilities to perform and write,” Lucy disclosed.

The sisters grew up in California, and their very first exposure to the California punk scene was when Dog Party opened for Agent Orange.

“We grew up in a typical, quiet suburban area – but our first exposure to true California punk rock was our very first show when we played with Agent Orange. We were pretty blown away by it on multiple levels. It had an alluring, intoxicating quality that there was no looking back on. We were hooked,” Lucy admitted.

Gwendolyn and Lucy look forward to their upcoming tours and playing in Canada again.

“The first and only other time we played Canada was during our summer tour in 2017 when we played at the Bovine Sex Club in Toronto – it was a blast. Now not only are we coming back to Toronto, but we get to see even more of Canada with shows in Winnipeg, Saskatoon, Calgary, London, and Montreal,” Gwennie went on.

“I thought Canada was cool last time, and I can’t wait to go back! My favorite part was trying the local cuisine and going shopping,” Lucy concluded.