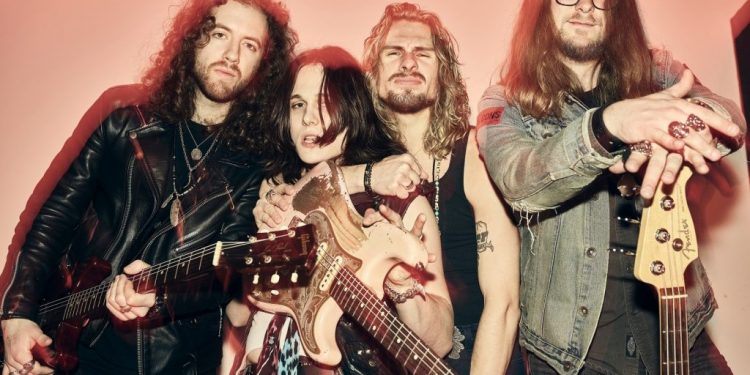 Tyler Bryant & The Shakedown are releasing their third album on June 28th titled “Truth and Lies.” It was produced by Joel Hamilton, a six-time Grammy-nominated producer who has worked with The Black Keys, Highly Suspect, and Tom Waits. The new album is set to be released on Spinefarm Records.

“We decided to get out of Nashville and away from home for this recording process. It was important for us to eliminate distractions and fully immerse ourselves into the creative process. Brooklyn in the winter brought us multiple glimpses into a changing scene. It found its way to the core of the attitude and mood we were trying to achieve. Having Joel as a common denominator was crucial. He pulled us left when we went right, and right when we went left, all while still allowing us to remain true to ourselves. I love the way it turned out,” drummer Caleb Crosby explained.

The new album “Truth and Lies” can be purchased online.

The music video for the song “Shock & Awe” shows snake imagery, and drummer Caleb Crosby is fond of snakes.

“I am a snake guy, and there are big snakes here in Nashville. I called Tyler with the idea of using them, and it evolved from there. He suggested playing off the album art and then we turned the whole thing on its head like an off kilter left of center wedding celebration. Nothing says “Shock & Awe” like snakes and confetti to me,” said Crosby with a smile.

Another great song off the new album is called “On To The Next”. The lyrics describe leaving a mark like a tattoo, and the song touches upon the band’s philosophy about leaving a mark every show they play.

“It’s our philosophy. Every show we play, we play to leave a mark. One that we want people to remember forever. I want to think our mark is one of integrity and authenticity, and blazing rock ‘n’ roll,” Crosby replied.

Tyler Bryant & The Shakedown have left their mark touring the world, and also opening for some of the best bands in the world including AC/DC and Guns N’ Roses. Caleb Crosby shares his favorite memory playing a show with AC/DC in Portugal.

“It’s still insane to comprehend. My favorite memory with AC/DC was our very first European show in Lisbon, Portugal. 65,000 people showed up at 3 pm, stood in the rain all day, waiting for music. We heard chants all afternoon. This was the biggest show we had ever played at the time. We finally hit the stage and right after the first song, and the sun came out. There was an eruption of cheering and our nerves settled. It was a beautiful moment we shared with the Portugal crowd and one I’ll never forget. It’s still one of my favorite shows we’ve ever played,” Crosby reminisced.

Caleb Crosby also has a fond memory playing a concert with Guns N’ Roses in Iceland.

“With Guns N’ Roses, I have so many of these favorite moments. It’s so hard to pick. We played in Reykjavík last summer with Guns N’ Roses. It was the largest show in the history of Iceland. They have a football chant that involves a drum. A ‘Viking War Chant’ if you will. They had just celebrated a World Cup berth, so I took the opportunity to share a moment and do the chant with the Icelandic people. It was so surreal. Their timing was impeccable,” Crosby went on.

Tyler Bryant & The Shakedown have also opened for Aerosmith – and there is a family connection with that band. Guitarist Graham Whitford’s dad is Aerosmith’s Brad Whitford

“I love that guy. And I love watching him play. I’ve learned consistency from his dad. Watching Brad play is nuts. He is the backbone and is always so solid. I’d say for Graham it’s a bit of a family reunion. He grew up on the road around that crew. We love Aerosmith and are grateful when we do get to play with them. They are one of my favorite live bands of all time,” Crosby added.

Tyler Bryant & The Shakedown look forward to their return to Canada and playing Lee’s Palace in Toronto on July 6th.

“We love Canada, especially in Toronto. We have had electric shows there. We are thrilled to be coming back and playing new songs from the record! We have a special connection with Lee’s Palace as well. It’s our third time there, and I’d say third time’s a charm,” Crosby concluded.

Also playing the concert are Temperance Movement and Thomas Wynn & The Believers. Tickets are $26.50 in advance, and the concert is 19+.